Undoubtedly one of the alluring offers to come out of rAge for us was hands on time with Razer’s Blade notebooks and the Razer Edge.

The 10.1 tablet worked like a dream, playing full Windows games - Dishonored (review) in our demo - without a hitch. The device, while heavier than an iPad, nonetheless wasn't uncomfortable to use at all, whether resting on our lap, or snugly fitting in one of its optional jackets, more particularly, the dual controller one. Razer’s Jan Horak pointed out that unlike a tablet, users were effectively holding a full PC in their hands, one boasting a Core i7 processor, 8 GB of RAM and a dedicated graphics card.

While the device is currently still only available in North America, apparently the company is working on bringing the full range to Europe and then Africa - good news, since as far as PC gaming is concerned, the Razer Edge proved to be a comfortable and enticing experience that left us wondering whether the future of PC gaming is quite literally, well in hand. 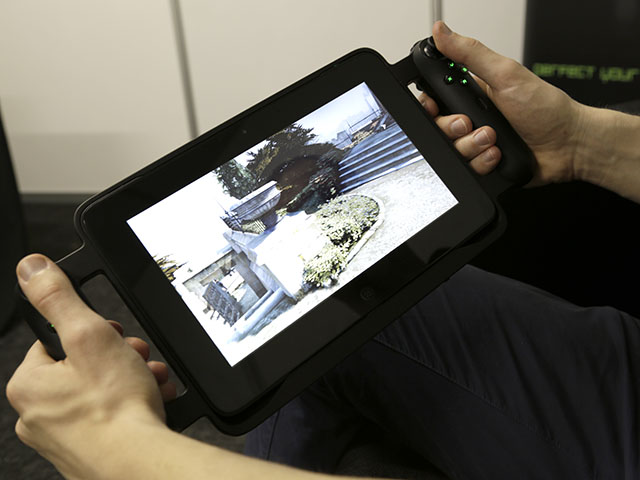 The Aliens have landed

No less worthy of a mention was a behind the scenes look at Dell’s Alienware offerings. Although we have written about these notebook beasts extensively previously, handling the notebooks - this time the Alienware 14 - was a treat of note. The Alienware in question was a beauty - solid, rugged, yet still compact enough to weather a long distance trip, particularly with eight hours worth of battery life.

Dell’s Gavin Slevin explained that while the 14” notebook was particularly intended for mobile gamers, the Alienware 17 and 18 were aimed at those for whom performance was top of mind. Interestingly enough, the latter two notebooks also boasted HDMI-in ports, allowing players to not only dine on PC gamers, but also plug their consoles in and play using the luscious HD screens as well.

He revealed that while the Alienware 14 is the top seller localy, this is followed by the Alienware 17 and then the Alienware 18. Interestingly enough though, the latter notebook is the one that tends to be customised the most, and, if you have the dosh for it, you can spend up to R60 000 for the notebook of your dreams.

The three Alienware's point to a more positive influense (apart from their cost), and that is the apparent continued growth of PC gaming as a sector - something Slevin attributes to providing cost effective entertainment (when you factor in that some games boast up to 70 or 80 hours worth of gameplay) and the fact that the machine can also be used for work (apparently many users who create content and who game are cottoning to the Alienware 14). There was no shortage of games on this year’s rAge floor, but we kept a particularly keen eyes for titles that we may have overlooked. Knack, for example, is looking particularly good, while the PS4 visuals are magnificent. For South Park fans (you either are one, or you’re not), The Stick of Truth is also well worth a look.

Two other titles looking particularly alluring are Batman Arkham Origins and Assassins Creed 4: Black Flag, both of which will no doubt be begging our attention before the year is out.

Also catching our eye was Nintendo’s stand. Whether you like Nintendo’s Wii U or the the 3DS or not (and really, why wouldn’t you?) the company sure knows how to bring colourful games, and thus attract the eye. Indeed, Donkey Kong, Mario and Link (from the Legend of Zelda) all brought some lively action to rAge’s shore floor, and had us going back for a heady dose of nostalgia more than once.

Racing fans can rev up their gaming engines courtesy of Drive Club on PS4 as well as Forza 5 on Xbox One. The current console generation is also catered to with the likes of Formula 1 2013 and Gran Turismo 6 at Sony’s stand.

If you prefer to gaze at your virtual gaming world through a sniper scope rather than the cockpit of the latest supercar however, make your way to the Telkom Mobile stand to see the Battlefield 4 beta in action.

Speaking of games, something else there was little shortage of was bargains, at least on games. Considering the fact that many wisely choose to wait a little for games to come down in price before opening their wallet, the budget conscious will be happy to learn that are are some games - including a few titles from earlier this year, such as Tomb Raider - which could be picked up for as little as R200 - a third of their original, fresh to market, price.

BTGames’ stand was the prime culprit here, so if you have been saving up or holding off some titles for just such a moment, then we recommend taking a good look or three at the specials on offer. Intel Has your gaming needs Well covered at rAge

Beyond Haswell, we also got the chance to get some hands-on time with the new Samsung Galaxy Tab 3 10.1, which is powered by Intel’s Atom Z2560 (Clover Trail+) SoC (system-on-a-chip). Overall navigation as well as multitasking proved to be snappy on the new Tab 3. Like Haswell, Clover Trail+ delivers a graphical boost over the preceding Atom generation with three times better performance within demanding tasks including 3D games like Modern Combat 4: Zero Hour and Real Racing 3.

After a short absence TechSmart has made a long awaited return to rAge (stand 28). You can now pop by to say hi, and have your picture taken with some of our cosplay girls with the photo being uploaded to our Facebook wall. Readers can also grab one of the first copies of our newest issue (October 2013), which is otherwise available as a digital download here. You can also subscribe to the magazine and enter our lucky draw to win daily prizes.

If you've taken a pic at the stand, you can find it on Facebook or on our site.