Acer kicked things off in Berlin yesterday for IFA 2017, and it would not be one of their press conferences without a few notebooks on show. To that end, the Taiwanese manufacturer served up refreshed versions of the Switch 7, Spin 5 and Swift 5, as the new 8th Gen Intel Core processors proved a common thread in all of their updates.

Starting with the Switch 7, which now comes in a Black Edition, it features a world first according to Acer in the form of a fanless 2-in-1 notebook design. Ensuring it doesn't get hot under the collar is the company's Dual LiquidLoop technology, normally found in their graphic-intensive gaming products.

Added to this, like many of Acer's convertible notebooks, a hinge extends from the main body, propping up the device for a variety of positions. Unfortunately though, Acer Africa says the Switch 7 Black Edition will not be making its way to SA, so we only have the video below to enjoy.

Moving onto the Swift 5 and the new specifications it will be sporting. It is slated for a release next year from March 2018 onwards at an estimated R13 999 locally. The i7 CPU of the 8th Gen Intel Core processors will be onboard, as well as a Full HD touch-enabled display, eight hours of battery life and a metal body that only weighs in at 0.97 kg.

With the Spin 5 a notebook currently available at local retailers (R15 999 RRP), perhaps it's worth touching on the new Chromebook 15 Acer unveiled yesterday as well.

As the name suggests, you won't find a Windows 10 operating system present, instead running Google’s Chrome OS. Added to that is a new metal chassis to house its 15.6" HD display (1366x768) and choice of Intel Celeron chipsets depending on the model you opt for. With Acer claiming up to 12 hours of battery life, the Chromebook 15 could prove a handy notebook, but no word about local availability at this stage. 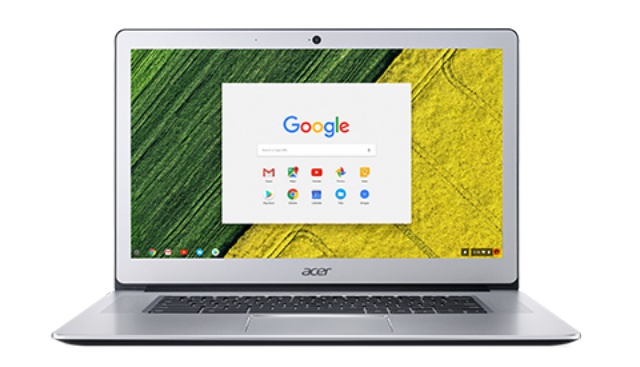