Banksy does Gaza with murals and travel video

He's taken over New York, but now the infamous graffiti artist Banksy is taking his stencil-aided efforts to the Gaza Strip. He has been conspicuous in his absence of late, but now its clear to see what he's been up to. Late on last week, a number of mysterious murals popped up all over the Gaza Strip, and now Banksy has debuted a short film on YouTube detailing his rather dangerous new project.

As always, Banksy's murals are aimed squarely at highlighting social injustices, this time round the young loss of life gripping the Gaza area as a result of highly strained relations between Israel and Palestine. One of his murals in particular has struck a chord with international audiences (pictured below). It features a military watchtower, which has a few children going around it on swings. 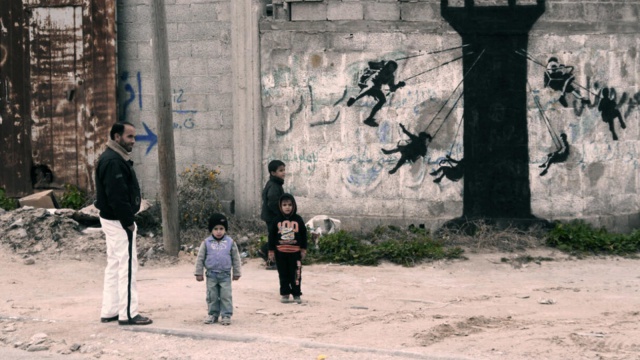 This week, Banksy also released a short film, which was shot in a travel video-esque format. Starting off with an image of an airplane wing, the video then brings up the message "Make this the year YOU discover a new destination." After that it's a series of shots from bullet hole-strewn alleys and a trip through some of the illegal tunnels, something you won't find mentioned in the in-flight mag. Click on the video below, courtesy of YouTube user Derek z, before it gets pulled down.