One day when the robots rise up against us, they'll probably be riding one of Boston Dynamics' creations, á la Caesar in The Rise of the Planet of the Apes. The US-based robotics company were picked up by Google in 2013, and specialises in creating all manner of mechanical beast, some of which were a little terrifying to see in motion.

Their latest creation, Spot, is slightly less frantic in motion, and shows just how far Boston Dynamics has come in a little over a year. 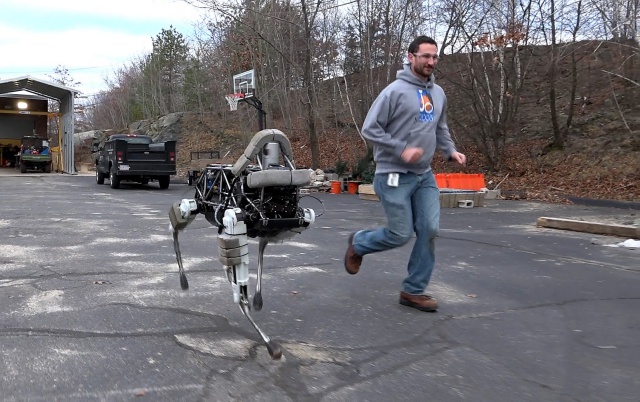 Weighing in at 72 kg (160 lbs), Spot is a smaller version of Boston Dynamics' BigDog, and features four hydraulic legs, as well as a sensor head just like its big brother. As expected, Spot is pretty adept at climbing up steep slopes. Sadly though, it proves less well suited to negotiating office cubicles and hallways, as evidenced by the video Boston Dynamics previewed along with the announcement. It's also quite loud as the hydraulic legs twitch into motion, while its sensor head rotates quickly to navigate surroundings.

Also showcased in the video, is Spot's ability to automatically stabilise and balance itself out after taking a knock, as Boston Dynamics employees kick and push it. We're not too sure if that amounts to animal cruelty, but Spot seems quite capable of handling any obstacles in its way. As far as the real world applications for Boston Dynamics' creations go, little is clear at this stage, but robots like Spot have untold possibilities in the search and rescue fields.