In an effort to be a bit more transparent with gamers, Bungie has decided to outline some of its upcoming content for Destiny 2 with a development roadmap. The newly disclosed plan features what will be in store for the remainder of Season 2, as well as what the first part of Season 3 will be packing.

While the developer did not go into the finer detail of each element, specifically what they'll be called and how much it will cost, they did mention some of the gameplay aspects and mechanics of Destiny 2 they will be issuing between now and May 2018.

As seen in the image below, the next batch of content will begin rolling out on 27 February, and focused on Strikes and Social. In particular, it will feature some Nightfall related content, but Bungie is careful to note that some aspects could be pushed back if necessary. The following update will tackle some Sandbox and Crucible elements, with refinements to weapons and gameplay fine tuning being noted. 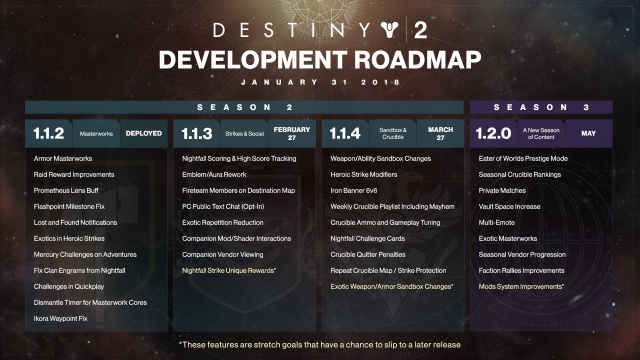 On the Expansion front, the next one is slated for May, but the name remains unknown for now. If we're going according to how the original Destiny released content, this upcoming expansion could be House of Wolves related. Most important about the expansion though, is that it will be DLC and require gamers to fork up some cash if they don't have a Season Pass. With Curse of Osiris failing to impress, hopefully this upcoming offering can do the business.