It’s a dual celebration for Sony and Ster Kinekor in South Africa today. Not only does the below video celebrate recent launch achievements, it also marks the day when Sony’s next gen console arrives for local players – namely, today.

“PlayStation 4 sales in North America and worldwide have been incredibly strong since launch, culminating in PS4 being recognized as the largest console launch in history,” commented Jack Tretton, the CEO of Sony Computer Entertainment in the US.

The video below though, practically bounds with excitement and optimism, in light of the fact that the PS4 has already enjoyed a very strong adoption internationally and is apparently the largest PlayStation console launch in the company’s long history.

Judging by our first impressions of the console earlier this week, there is plenty to be excited about, and quite fortuitously, the PS4 launch also coincides with a long weekend.

What has our gaming connoisseur, Pippa Tshabalala, had to say about this year’s worst games? Find out here. And what were our choices for top titles for 2013? Browse here to find out.

One of the games delayed from this year into next was Fable Anniversary, the reworking of the 2004 title which started the Fable franchise. Now, Fable Anniversary has been confirmed to be arriving in the first week of February, exclusively on the Xbox 360.

When it does arrive, the game will apparently boast improved 1080p visuals, a revamped save system, as well as all the content from the subsequent The Lost Chapters. Lionhead Studio also announced that all first edition copies of Fable Anniversary will include additional bonus content, such as Scythe’s Outfit, Black Graduate Outfit, Red Prophet Outfit, Blue Guard Outfit, Red Guard Outfit, Lute Weapon and Will User’s Sceptre Weapon.

Finally, showing just how far games have come in the last decade, the team released a couple of images with side by side comparisons of the game as it looked in 2004 and how Fable Anniversary will appear ten years later. 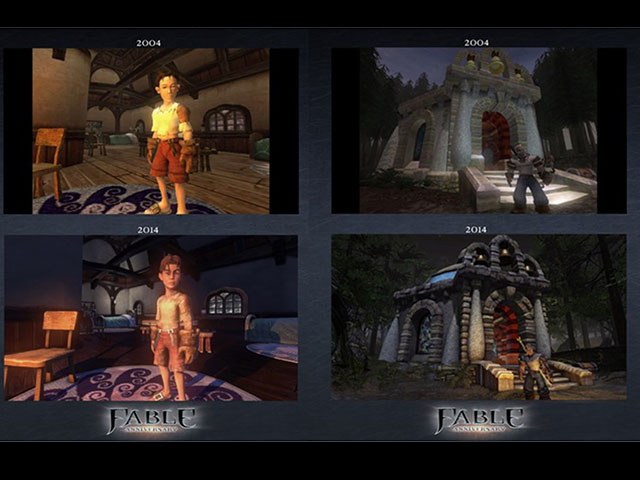 Bound by Flame story trailer escapes the pit of YouTube

Take some Dark Souls, add a hefty dose of The Lord of the Rings, and then a bit of Dragon’s Dogma or The Witcher. The result may very well look like the enticing new trailer from the forthcoming Bound by Flame.

Suffice to say, the title may have slipped off the radar for a bit, but the trailer below certainly puts it firmly back on the map as a game to watch out for next year. By means of a quick recap, the game will see players stepping into the shoes of a mercenary who is possessed by a flame demon.

Alas, this doesn’t mean they will be able to chow down on extremely hot curries without blinking, but rather, they will have to choose between retaining their humanity or succumbing to the demon’s seductive offering of greater power. Choosing the latter, of course, would come with a price, with the demonic influence expressing itself in their appearance.

The game will be demanding our time in the first half of next year, and will be available on PS3, PS4, Xbox 360 and PC.

Infinity Blade 3 will be receiving a mega update little later this month (the 19th to be exact) in the form of Ausar Rising. The update, which will be free, is apparently the largest one to date for the series. It will bring with it sixty new items and two new modes (Deathless Quests and Survival Arena). What’s more, the content pack will also add another dragon (because everything is better with more dragons) as well as a few new locations from the Infinity Blade books.

For those in a nostalgic mood, the content pack will return players to where the Infinity Blade franchise began, the Dark Citadel. For a more detailed account of what Ausar Rising will offer, as well as what the new modes will entail, swipe down to the video below and feast your eyes.

As exciting as the launch of the first next-gen console (sorry Wii U) is in South Africa, are the forthcoming games users will be able to play on it. Included amongst the list of titles we are most looking forward to playing is Tom Clancy’s The Division, which launches next year on Xbox One, PlayStation 4, and Windows PC.

The Division is an open-world role playing game set in a post-apocalyptic New York City, in a world devastated by a terrorist attack that gave rise to a global pandemic. Ubisoft’s latest trailer for the game (posted below) showcases the next-gen Snowdrop engine which powers the title.

The Witcher 3 casts an appealing spell

Find your RPG senses tingling over the prospect of playing the third and final installment in The Witcher saga? Then you’re in luck as Polish video game developer and publisher, CD Projekt RED, has released a new trailer showcasing parts of the game running on next-gen platforms. You can also experience the Slavic-inspired music used in the game to convey the brutality and violence of the epically sized virtual world.

The release date for The Witcher 3 still needs to be revealed, but the game will make its way onto Windows PC, Xbox One, as well as the PlayStation 4.