Gaming News Round-up - The Look Out and Look Forward Edition

Next Tomb Raider game will be preceded by comic

Well, here is some good news for those who played and loved the Tomb Raider reboot from earlier this year (if you haven’t yet, you really should).

Not only is a sequel coming, but it will apparently lead directly off of a new Tomb Raider comic book series, revealed at Comic-Con in San Diego. Apparently, both the comic and the next game will also see Lara leaving behind the confines of the island on which ‘an adventurer was born’, with the comic setting the stage for Lara’s globetrotting in the sequel.

The comic book, which will be set just after the conclusion of the reboot, will apparently become available in February, with the next game climbing its way onto shelves in March.

This is particularly good news, if only because for a while it looked like Tomb Raider’s continued fate may be uncertain. Despite the fact that Tomb Raider received a critical reception and is a blast to play, Square Enix inexplicably stated it had failed to meet its expectations, as the game only sold a ‘mere’ 3.4 million copies.

This assessment, apparently, was about as rational as expecting our actual archery skills to improve by using Lara’s bow in the game (they didn’t).

Somewhat fittingly, considering the fact that it has Inquisition in the title, the next Dragon Age will apparently take into account your choices made in previous Dragon Age games, with the world encountered in Inquisition being shaped accordingly.

Speaking at Penny Arcade Expo (PAX) Australia, Cameron Lee, BioWare’s producer hinted that players’ previous decisions would carry forward, although no details were given as to exactly how this would work.

BioWare’s writer, Patrick Weekes, added that the aim is to provide players with an equally rich experience, irrespective of the platform on which it is being played.This is an allusion to the fact that the game will release on the next-gen consoles next year, despite the previous entries being launched on the PC, PS3 and Xbox 360.

Not excited yet? Then take a look at the trailer below, or risk being stretched on the rack to confess your anticipation.

In less than a month, Saints Row IV will rudely blasts its way onto the PlayStation 3, Windows PC and Xbox 360. Within the game, the leader of the Saints is somehow elected President of the United States (proving just how low electoral standards could really slip, and paving the way for Homer Simpson to be next to take office).

The Saints’ dramatic climb up the social ladder from the ghetto to the Oval Office is short lived however, thanks to a catastrophic alien invasion. The White House has to respond to the alien menace in their usual unrefined, no-holds-barred fashion, with Matrix-style superpowers also thrown into the mix.

The latest trailer (posted below) for the game entitled Weapon of Mass Abduction shows how a member of the Saints sets about dealing with an all too common real world problem, namely someone stealing your parking space.

If, like us, you were intrigued by what you have seen to date of Beyond: Two Souls, or are just interested in game development in general, then you will definitely want to take a look at this newly released behind the scenes video.

The video shows not only a fair amount of actual gameplay, with Ellen Page flexing her acting chops to bring Jodie Holmes to life. It also provides a bit of insight into how Quantic Dreams approached creating Beyond: Two Souls as well, both from a writing, user interface and gameplay perspective. It also, alluringly, shows a bit of what Jodie using her abilities looks like within the game itself.

Beyond: Two Souls is slated for release in October. In the meantime though, take a look at the video below to see why this game may well be worthy of your attention.

The second half of this year is already looking scarily good from a gamer's perspective, and adding to this, is Outlast, which has now been dated for release on Steam at the beginning of September.

The first person horror game sees you playing as a journalist (we warned you this game would be scary) with camera in hand, infiltrating Mount Massive Asylum, in the dead of night, and it is not to attend an improptu birthday party.

At least, if the events depicted in the lengthy eleven minute trailer below meet your idea of a birthday party, then a The Cabin in the Woods style vacation is probably right up your alley too. While the game is currently slated for release on PC at the moment, the team is apparently open to releasing it on consoles as well.

We recommend turning the lights down low and watching this one in the dark.

Adventure on the high seas reaches availability port in November

Assassin’s Creed IV: Black Flag looks set to steal a large chunk of your gaming budget during November, when it launches on the Xbox 360, PS3, Nintendo Wii U, and later on Windows PC and next-generation consoles as well.

The game tells the tale of Edward Kenway, a pirate trained by assassins. Players will set foot on the beaches of some exotic coastal cities and tropical jungles in search of treasure and adventure. As Kenway, gamers will also cross swords with some of Piracy’s most legendary names the likes of Blackbeard and Calico Jack.

If the 2 minute gameplay teaser trailer released at the end of March was far too brief for your liking, hit the button below to view more than 13 minutes of gameplay footage in the trailer posted below.

Splinter Cell: Blacklist will apply a strangle hold on your entertainment plans for August, at which time it will sneak out of the development shadows onto the PS3, Xbox 360, Windows PC, and Nintendo Wii U.

Within the game a group of terrorists calling themselves The Engineers have initiated a terror ultimatum in the form of a deadly countdown of escalating attacks on US-owned interests. It is up to series protagonist Sam Fisher to give this group a stern talking to and have them pondering their actions whilst in the naughty corner, or alternatively capture or kill them.

Gamers will get to minimise conflict and apply non-lethal force as a Ghost, remain in the shadows in order to pounce on foes as a predatory killing machine known as the Panther, or skip the clandestine tactic to bring some terror to the terrorists head on in Assault. For a better look of these different playing styles hit the button on the video posted below.

CoD: Ghosts to blast its way onto the Wii U too

In the next-generation PR arena, Microsoft’s Xbox One and Sony’s PlayStation 4 seems to be monopolising all the headlines, but that does not mean that the original next-gen system - the Nintendo Wii U - does not have its share of hotly anticipated titles in the works.

Case in point is Call of Duty: Ghosts which has now officially been confirmed to be coming to the  Wii U on 5 November along with the already announced platforms, namely the PlayStation 3, Xbox 360, and Windows PC. CoD: Ghosts will also be haunting the PS4 and Xbox One later in the year. 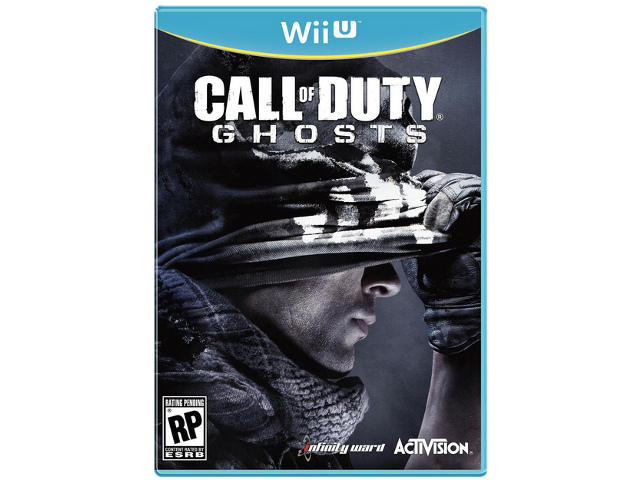