Those on the lookout for Watch Dogs can now claim to have a bone to pick with Ubisoft, since the company announced that the highly anticipated title has been delayed into 2014.

On its blog, Ubisoft explained: “As we got closer to release, as all the pieces of the puzzle were falling into place in our last push before completion, it became clear to us that we needed to take the extra time to polish and fine tune each detail so we can deliver a truly memorable and exceptional experience.” Indeed, the company’s CEO, Yves Guillemot elaborated to Bloomberg that Watch Dogs could be “as big as Assassin’s Creed, if not bigger.”

Expectations are certainly sky high for the game, with the company expecting it to sell in excess of six million units on its eventual release. Every platform is affected by the delay – as Watch Dogs was originally slated for release next month on the Xbox 360, Xbox One, PlayStation 3, PlayStation 4, PC, and Wii U.

Incidentally, Watch Dogs wasn’t the only forthcoming game from the company that was sent to the bleachers. Racing game The Crew was also towed back to the pit till sometime after the first quarter of next year.

Let’s just hope that when Ubisoft does let the (Watch) Dogs out, it’s as good as we (and they) hope it will be, and that we haven’t all been barking up the wrong tree. One lick of consolation is the trailer below.

The Evil Within is not the only survival horror title that will be scaring gamers on next generation platforms, as Swedish indie developer Frictional Games has provided a first look of SOMA (trailer posted below). This game is only emerging from the development shadows during 2015, at which time it will have Windows PC and PlayStation 4 players crying out for mommy and reaching for their comfort blankie.

SOMA is a sci-fi horror game played from a first person perspective, in which gamers assume the role of a person trapped in a nightmarish, futuristic world. The game will involve lots of exploration, and will immerse players within an interactive narrative that addresses topics such as “Can machines be conscious?” and “Do we have free will?”

Ratchet and Clank: Into the Nexus goes gold, to come with free game

Not only has the forthcoming Ratchet and Clank: Into the Nexus gone gold, according to Insomniac Games, but apparently the title will also be bringing a free game in tow.

Ratchet and Clank: Into the Nexus also returns to the familiar game-style and conventions as found in earlier Ratchet and Clank titles, after Insomniac’s departure from form with All4One and the tower defense orientated Q-Force. In the meantime though, if your sense of humour veers towards the sometimes silly and comical, take a look at the duo of trailers below.

Cyan returns to the past and kickstarts the future

Here’s some good, or at least interesting news if you have fond memories of adventure titles Myst and Riven. Cyan is apparently working on a new first person adventure title for PC and Mac called Obduction.

The studio behind the granddaddy of adventure games, has apparently turned to Kickstarter, and is seeking a little over $1 million to get the venture off the ground. Apparently slated for an expected launch in 2015, the game will run on Unreal Engine 4. If, like us, you are somewhat intrigued, take a look at the trailer and frank explanation from the studio below.

If you have just played your way through the single player campaign of GTA V and are now on the lookout for a new open-world action game, Assassin’s Creed IV: Black Flag will soon be docking on current gen platforms. In the newest trailer released for this game, we learn all about its new protagonist Edward Kenway. It shows how oppression from corrupt officials forced Edward to take up the famous white hood worn by franchise heroes Conner and Ezio before him.

Assassin's Creed IV: Black Flag sets sail on the PlayStation 3, Wii U and Xbox 360 on 29 October, with the Windows PC version following shortly thereafter in November.

If like us, you find yourself performing gear changing and steering motions in your sleep in anticipation of Forza 5, you will be glad to hear that Turn 10 has revealed four new vehicles that will feature in the simulation racing game.

These dream rides include the 2012 Nissan GT-R Black Edition, the classic 1967 Lamborghini Miura P400, and the epic 2012 Mercedes-Benz C63 AMG Black Series (pictured below). Forza 5 is a launch title for the Xbox One. 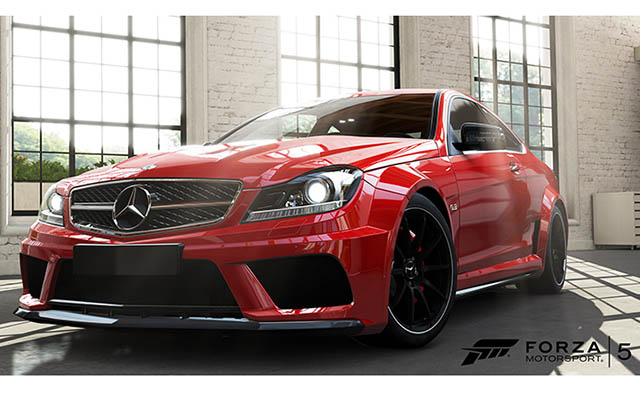