If your plan to celebrate Friday the 13th is to dip into some survival-horror games this weekend, then Alien: Isolation has your back (and probably an arm, a foot and half your face as well). Just in time to scare yourself shirtless again, the latest and fourth piece of DLC, Lost Contact is now available.

The DLC costs R99 on the PlayStation Network, or alternatively is part of the season pass.

This one adds a second Survivor Challenge map to the game and gives you only one life to play with, meaning that, as the developers put it, one wrong move can, quite literally, be your last. Completing challenges unlocks rewards and points, giving access to new items to collect and craft. Instead of playing as Amanda’s daughter, this one puts players into the jittery footsteps of the first survivor she meets on the ill-fated space station. For a little bit of fun – and to watch the developers themselves get their faces chewed off by a Xenomorph - throw a flare and then quietly, oh so quietly, creep to the trailer below.

Can’t get enough of Dying Light (presuming you have already downloaded the digital version ahead of the retail release next week)? Well, here’s some good news. The developers have confirmed they have more in store.

To make surviving the zombie horde that much more difficult (because you know you’ve become hardened when surviving undead creatures at all seems like a piece of cake), the game will soon receive a ‘hard’ mode. Also slated are new skins, which is so handy when you live in a world in which bloodthirsty monsters are really keen to divest your virtual body of its existing one.

Both enhancements will apparently be free, and Techland promised in a somewhat cryptic tweet that this is the first of many additions to come. The game already has an addition worth revisiting, in the form of its 4 versus 1 PvP Be the Zombie mode in which you have to chase down and extinguish humans. If you want to really leave a bad taste in other players’ mouths, particularly fans of The Walking Dead, you could always roam the game shouting ‘Oh Rick? Darryl? Carol? Where are you?’

Much like Drake from the Uncharted franchise or Indiana Jones, it seems like adventurer/treasure hunters have the uncanny ability to attract all manner of danger. The same goes for the fairer sex who ply their trade unearthing ancient artifacts, the most famous of which is Lara Croft.

If you needed any convincing of this, check out 2013's Tomb Raider reboot, where Lara was brought to within an inch of her life and forced to survive while limping for most of the game. Sadly (or perhaps good for gamers) her luck hasn't gotten much better, as the developers for Rise of the Tomb Raider (set for release in the final quarter of 2015) have detailed what Lady Croft will be going up against.

Namely Mother Nature, and pretty much everything she can throw at you. From dealing with dense wooded forests in the middle of winter, to traversing near impossible mountain faces, Lara is certainly going to be put through her paces physically for Rise of the Tomb Raider. It feels pretty apt though, as this storyline seems like an origin story, and as such needs to set up just how Lara Croft came to acquire her unique skillset.

Also thrown into the mix are wild animals and a day/night cycle, giving the game more of a Far Cry/Red Dead Redemption kind of feel. According to developers Crystal Dynamics, Lara will be pitted against all types of feral beasts, along with needing to hunt in order to survive. How well it will fare compared to those two franchises remains to be seen, but click on the launch trailer after the break to see Lara get up close and personal with a Grizzly Bear.

We always love checking out Humble Bundle to see what sorts of gaming delights they have on offer, and this week's Weekly Bundle is good enough to make St. Valentine himself happy (if they had games in third century Rome that is). History lesson aside, this week's bundle has been titled "For Lovers (of games)" and features a lot of Anime themed gaming goodness. There are also some interactive visual novels up for grabs, as well as some rather peculiar pigeon/french maid sporting bedspreads from the dating sim Hatoful Boyfriend.

In usual Humble Bundle fashion, those interested can pay whatever denomination they please for the three games on offer, Long Live the Queen, Analogue: A Hate Story (for those with someone this Valentine's Day) and Go! Go! Nippon! (yes, all the exclamation marks are necessary). Those that wish to part with roughly $6 (R70), can also get their hands on three visual novels as well. If however you have some extra cash to throw around, $35 (R410) will get you all the games, novels and pigeon bedspread we mentioned earlier. If you're loved one has a fondness for Anime, then this week's bundle is well worth checking out. 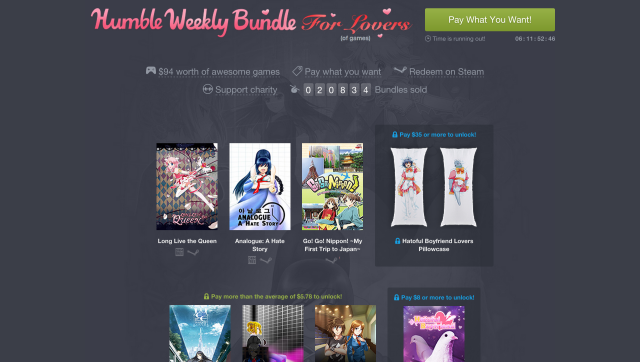 We mentioned yesterday that Sony's PSN would be down for a little over three hours last night, and it seems like this is the reason why. PlayStation took to its blog this morning to detail a new change that could be big news for account holders. Now PSN users, who are over the age of 18, will be able to upgrade their sub account to a master one. The upgrade process will initially be done via the web, with plans to do so via one's PS4 in weeks to come.

The move now allows users, who may have setup their account in their early teens a few years ago under the guidance of their parents, to now have full access and control of the account to themselves. Much like leaving home for the first time, this account update is like that first breath of freedom into an independent gaming universe. Okay, we may be reaching a bit with the metaphor, but it simply makes tailoring your account more easy. 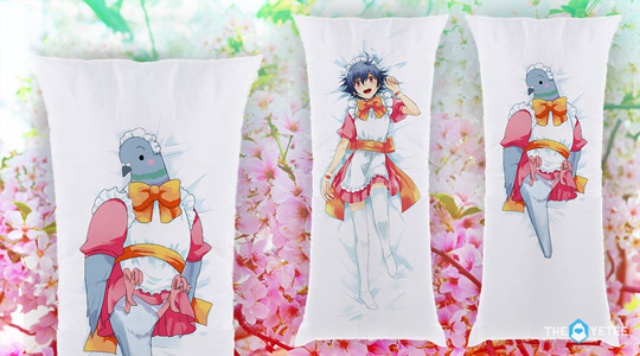 When was the last time you saw a Little Dragon flee a Demon Monkey? Well, now is your chance, as Bruce Lee (also known as The Dragon) is the latest playable character to join Imangi’s very popular endless runner Temple Run 2.

The new addition, available in-game, coincides with what would have been the celebrated martial artist’s 75th birthday (this year). As anyone who has seen the excellent Dragon: The Bruce Lee Story would know (or better yet, read one of his books), Lee was as passionate about philosophy as he was about martial arts. It’s thus fitting that choosing the character will see the player being peppered with some of Lee’s words of wisdom, in between trying to escape the monkey on their back. 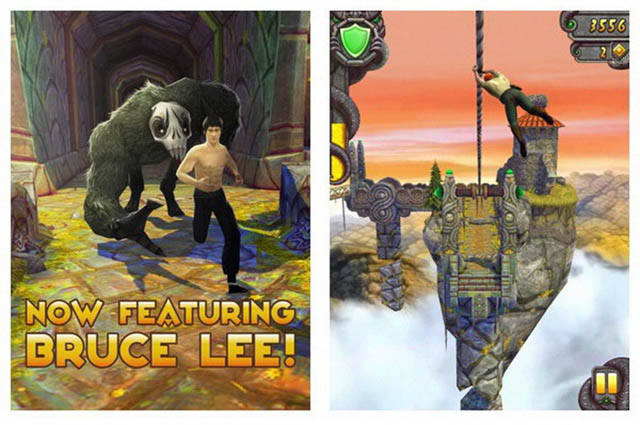