Falling into the camp of ‘Now for something completely different’ not only did independant Hydra Interactive announce their new development studio, it also gave details about its first game. This, apparently, will be a genre-bending title, Upside-Down Dimensions, which combines action, hack n slash, RPG, stealth, platform and puzzle elements, which its story follows the classic lines of good versus evil.

Sounding a little reminiscent of the excellent Tearaway, which was also set in a paper world, Upside-Down Dimensions, will apparently task two heroes (guess who?) with saving their paper kingdom from being ravaged and destroyed by the hordes of evil.

The game will boast 20 beautifully crafted levels, co-op multiplayer and will make use of all next generation second screen devices. Sounds intriguing. 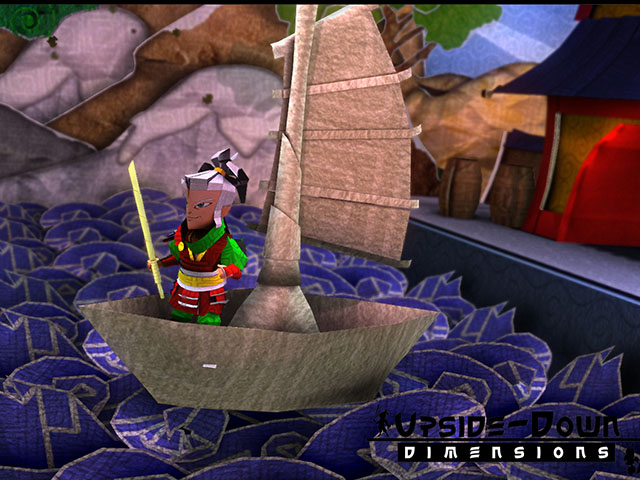 Child of Light is the new fairy tale-inspired RPG title from game developers Ubisoft Montreal. The words fairy tale, may not evoke the strongest reaction from hardcore gamers, but we were really drawn to was its watercolour-esque styling, rendering a beautifully rich environment.

The premise of this trailer will see users take the role of Aurora, daughter of the Duke, who is seemingly believed to be dead, but is in fact transported to dangerous world of Lemuria. Players must help Aurora navigate her way through numerous villages, forests and mountains while fighting insect-like enemies and ultimately trying to defeat the Queen of the Night to return home.

Child of Light is set for release on 30 April for the PS4, PS3, Xbox One, Xbox 360, PC and Wii U. We cannot wait to get our hands on it, and if you're still unconvinced, check out the trailer below.

Sony has recently detailed one of the key features in it's 1.70 update for the PS4. It is set to be the company's first major update for 2014 and will boast one of Sony's new video editor applications, SHAREfactory.

SHAREfactory lets PS4 users combine and instantly edit gaming video clips, with a host of filters, transitions and themes, as well as share them on social media. Users can also add text, stickers and pre-authorised audio tracks. Further added to this, SHAREfactory has a picture-in-picture function to allow gamers to add personalised commentary to their clips.

Other inclusions in this update will allow users to pre-download pre-ordered gaming titles prior to their release. If users enable the Automatic Download feature, they will be able to play and access game content as soon as it is officially released.

This new update will be available to PS4 users, in the near future, according to Sony, as the company is set to ramp up its console's application functionality in the coming months.

Something old and a few things new announced for PS Vita

Say what you will about handheld consoles, but the fact remains that there are still developers who believe in their potential and thus are releasing some very tantalizing titles. Case in point: Japan Studios. The latest news, sure to make PS Vita owner’s happy, is that a trio of new games are headed to Sony’s much underrated and frequently underestimated handheld from that studio.

The first of these is Soul Sacrifice Delta, an expanded version of the original, that brings yet more content to the game; for example new Archfiends, inspired by twisted retellings of classic tales, as well as new sorcerers, new quests and of course, new spells. Players who have fought their way to success in the original will be able to transfer their save file over to the new game.

Additionally, Freedom Wars (previously announced for Asia) has been slated for release in our neck of the woods as well. The action role playing title puts players in the shoes of a prisoner who has been slapped with the harsh sentence of a million years from birth (we assume that in its dystopian world, crying when you are born is considered a major crime). Anyway, the only way to reduce this sentence and gain your freedom is by completing rescue missions.

The third announcement for Oreshika: Tainted Bloodlines shows some love to JRPG (Japanese Role Playing Game) fans. The game puts players in charge of an ancient Japanese clan that have been cursed with a maximum lifespan of just two years.

According to the developers, your task will be to “lead the clan on their quest to lift the curse and enlist the help of gods inspired by Japanese mythology to make sure each new generation of the clan is more powerful than the last.” In others words, Infinity Blade with an JRPG flavour.

Finally, since the only thing better than announcing three new games for a platform would be announcing four new titles, PS Vita players were graced with yet another title to consider adding to their game library.  This one though is a blast from the past in the form of The Sly Trilogy (still fondly considered amongst the best platformers in the PS2 era) for the handheld console. As on the PS3, the release brings together the first three games in Sly Cooper’s adventures, remastered of course, in HD glory.

These are not the only games hinting that the PS Vita is hot property. Also dated this week is Borderlands 2 for Vita, coming during the course of May, and top-down shoot-em-up game Dead Nation on the portable console, available as of this week.

If, like us, you have been not so patiently waiting for Blizzard’s latest hit, Hearthstone to find its way to your iPad (and you haven’t been living in Canada or New Zealand) then today is your lucky day. The company announced that the iPad version of the card combat game (CCG) is now available globally.

As with the PC version, it too is free, and supports in app purchases; and the iPad version of the game has been designed to work seamlessly with your PC gameplay. This means that card collections  - which are linked to your Battle.net account – can be switched between the two versions. The app requires an internet connection, iOS 5 or later and the iPad 2 or better to run.