If you have been tracking the hype surrounding the upcoming The Force Awakens movie, you might have noticed that the Star Wars merchandising cart is close to collapsing. Adding extra weight to the axles is HP, which have managed to produce a Star Wars Special Edition notebook.

The company has aligned itself with the Dark Side though, with the notebook clearly inspired by the Galactic Empire. HP notes the “battle-worn” design elements, Darth Vader on the cover and Stormtroopers around the keyboard. Fans will also find a lightsabre inspired red backlit glow for the keys, while the touchpad design mirrors the X-Wing Star Fighter Guidance System.

On the software side, there are a fair bit of Star Wars features to get the fans excited. If you click on the Imperial Cog desktop icon you access the Star Wars Command Centre for browsing the themes and galleries, These include over 1100 images, amongst which behind-the-scenes photos, storyboards, artwork, set and costume designs, and audio selections. 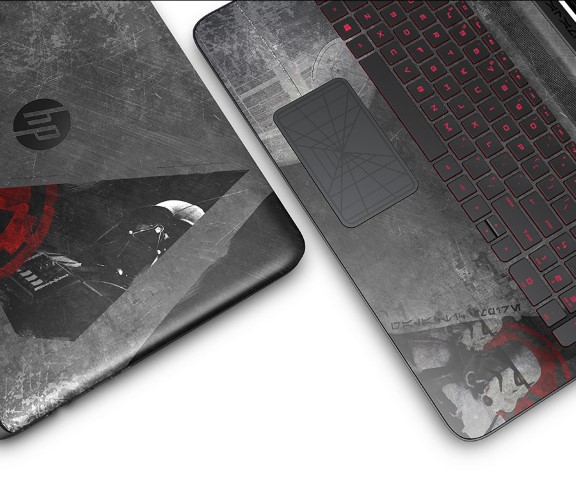 This is the machine you are looking for

Users can replace standard Windows notification sounds with eight categories of iconic Star Wars sounds including R2-D2 (strangely enough since the notebook is Empire themed) and, as expected, a lightsaber.

Also onboard are the first Marvel Star Wars comic in the series, e-book excerpts from select Star Wars titles and the Galactic Basic Standard’s alphabet Aurebesh font in the font library.

Regarding specs, the Star Wars notebook is no entry-level Stormtrooper, sporting a 15.6” full HD screen, the choice of sixth generation Intel Core i5 and i7 processors, up to 2 TB of HDD and a maximum of 12 GB of RAM. There is also the option to select between Intel HD Graphics 520 and NVIDIA GeForce 940M graphics processors, with seven hours of battery life mentioned according to HP.

While a local release date and price are unconfirmed, the Star Wars Special Edition Notebook is expected to be available in Europe in October starting at €800. 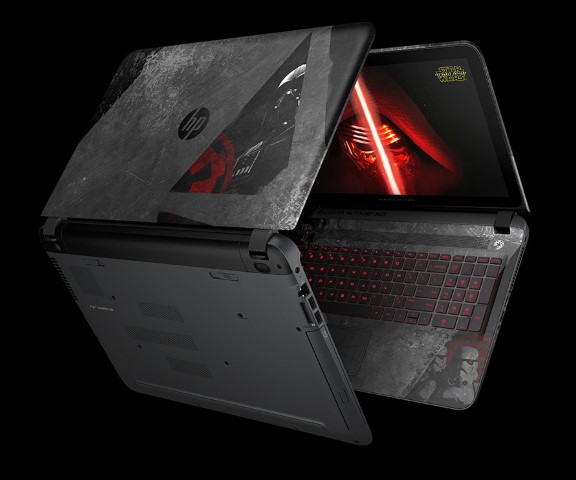