Hands on with the Aorus X7 at Computex

Admittedly, there is a staggering amount of technology on display at Computex, and no doubt there will be much more to catch our eye as the week progresses. One of the highlights so far though has been the Aorus notebooks. We were shown a brief glimpse of them on the first day, today though we managed to spent more time and get a closer and more intimate look at both these extreme gaming notebooks. We came away even more impressed.

The 17” Aorus X7 version could accurately be called a beast of a notebook – and it is so performance and specs wise – but in looks and aesthetics, it is also a beauty. Clearly, it’s been designed with premium materials, as indicated by the black brushed aluminium frame and most important, a solid, creek free construction.

In case you missed our preview, here's a quick recap of the internals: an Intel Core i7 processor, Nvidia GeForce GTX 860M graphics cards with 8 GB of video memory; up to 32 GB of system memory, three 512 GB mSATA SSD's and a 2 TB harddrive.

Surprising though is how thin it is (22.9 mm) which belies the fact that it is an SLI (two graphics cards working in tandem) gaming notebook. Additionally, we really liked the feel of the chiclet keyboard; it not only boasts beautiful backlighting adjustable in increments, it also seemed to have nice, springy keys.

Thoughtfully, and as expected on a gaming notebook, the WASD keys are highlighted, but even more, and no doubt music to MMORPG players' ears, the keyboard boasts a comprehensive number of macro keys. 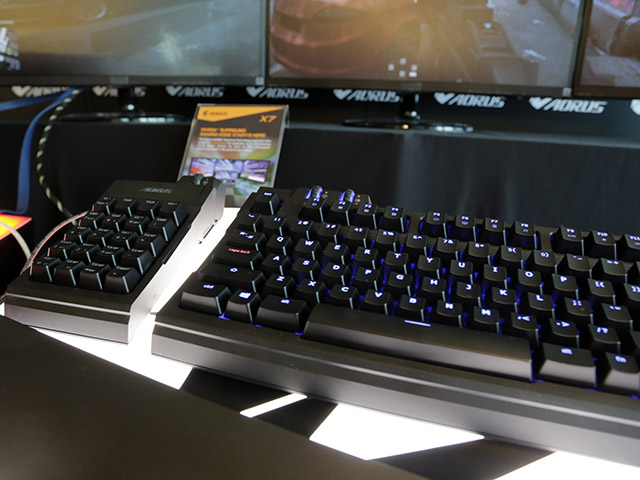 Accompanying the X7, but sold separately, is the Aorus gaming keyboard, which can be detached into three seperate pieces.

While the luscious display impressed us no end last time we saw it, when we went hands on with the notebook today it was hooked up to three surround screens, spreading the game view in a panoramic arc around us. We found that navigating the gameworld across these screens was as smooth as butter, and for those PC gamers who can afford such a setup, they can expect to make their console playing counterparts turn a brighter shade of green.

The notebook doesn’t stand alone – it comes with an equally as impressive and quality notebook backpack – an important part of kit if you intend toting your notebook around comfortably. This, we dare say, looked and felt every bit as impressive as a high end notebook bag from Everki or the like.

It can also be complemented by a no less impressive keyboard and mouse, each of which has been lavished with some serious attention in its own right (to be sold separately). The external Aorus keyboard can be detached into three parts – with the macro keypad, and palm rest being detachable from the main keyboard, and the former can be used independently as well.

Additionally, a beautifully crafted mouse completes the Aorus gaming package; and initially, we found this to be very comfortable to hold. It too boasts several macro keys, and, like the keyboard, customised lighting options.

According to the company, at present the machine is peerless and intended to offer discerning players and users of high end programmes like 3D graphics extreme, no holds barred specifications and performance. From what we could gather, it is not a machine for those who embrace compromise or are willing to settle for second best as far as their notebook is concerned, rather, throwing just about everything a true PC gaming/notebook enthusiast could want and hope for in a notebook. This is one notebook we cannot wait for South Africa PC gamers to get their hands on; the good news is it looks like you will be able to do so in the month or two’s time.