While Samsung was the first to debut a new folding screen at its Samsung Unpacked event last week we all knew it would not be the last. And thus Huawei has picked up the folding screen gauntlet and run with it, debuting its foldable Mate X device at Mobile World Congress, currently happening in Barcelona.

The device has certainly not scrimped on size -  when folded it boasts  a 6.6” display, and when opened, transforms into a slim, 8” tablet that is 5.4 mm thick. This is accomplished through a Falcon Wing mechanical hinge; whether then hinge will be detectable to one’s touch when the phone is unfolded though, is uncertain. Based on initial images though, it doesn’t seem like the hinge interferes with the viewing experience, with the OLED screen appearing seamless.

Furthermore, also pushing the boundaries is that the device supports 5G right off the bat, no doubt an attractive proposition for those who want to be ready for the next generation network and avail themselves of  the  latest foldable screen technology. 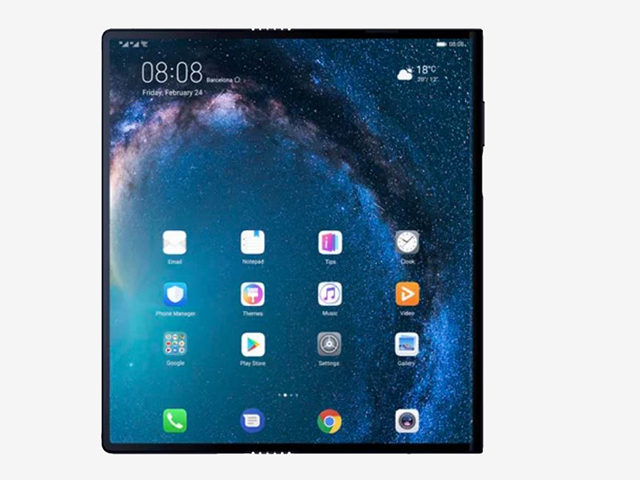 According to Huawei, the Balong 5000 chipset has “unprecedented” 5G download speeds, at 4.6 Gbps on the Sub-6 GHz band. The company added that Balong 5000 is also the world’s first chipset to support both SA and NSA architectures, which means that users will not need a device upgrade to continue enjoying 5G connectivity. The Huawei Mate X’s dual SIM feature supports both 4G and 5G.

Specs are a bit sparse at the moment but we do know that the phone boasts a high-capacity 4500 mAh battery. As for what battery life can be expected when using the phone as both a smartphone and tablet though, is still uncertain. While the device will certainly have a camera or cameras on board, there is no specific  detail as yet, or whether the  device will sport the same shooters found on the Mate 10 Pro.

Interestingly, the Mate X comes with an integrated Fingerprint Power Button that enables users to power up the device with one tap. As for pricing and availability there is no South African RRP given as yet although some reports are suggesting the R40 000 region, with the UK price being north of 2000 pounds.

However, as to availability, Likun Zhao, President of Huawei CBG, Southern Africa had this to say: “In terms of technology Huawei has taken another leap in innovation with our announcement in Barcelona at MWC.We will continue to bring the latest innovation to our local consumers and we intend on bringing Mate X to South Africa later this year.”