Back in 2016, Chinese manufacturer Huawei said it wants to take the world’s top spot when it comes to smartphone sales. The company seems to be one step closer, surpassing Apple for the second position recently

Counterpoint’s Market Pulse research for July 2017 notes that Huawei has topped Apple’s sales for both June and July, with August also looking on track for the same. Samsung is still easily holding on to the top spot, keeping a good pace with just over 20% of the global smartphone sales share. 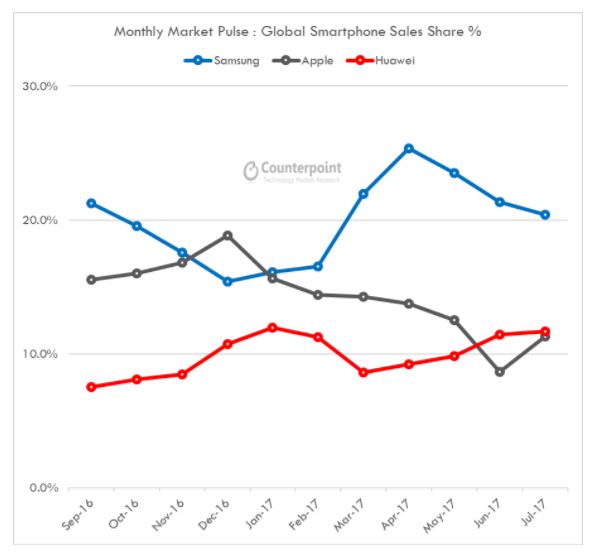 For how long will Huawei be able to cling to that number two position? Not that long one would think, with the iPhone 8 set to be revealed next week, although when it will be fully available is anyone’s guess.

Of Huawei’s second place on the global rankings, Counterpoint’s research director, Peter Richardson says, “This is a significant milestone for Huawei, the largest Chinese smartphone brand with a growing global presence. It speaks volumes for this primarily network infrastructure vendor on how far it has grown in the consumer mobile handset space in the last three to four years.”

It should not come as much surprise that the Apple iPhone 7 is the world’s top selling device, with 4% of sales, followed by the iPhone 7 Plus at 2.9%. Huawei’s P10 is not found in the top 10, instead it is another Chinese brand, Oppo with its R11 and A57 holding on to the third and fourth spot. Samsung gets a nod at number 5, with the Galaxy S8 grabbing 1.8% of market share. 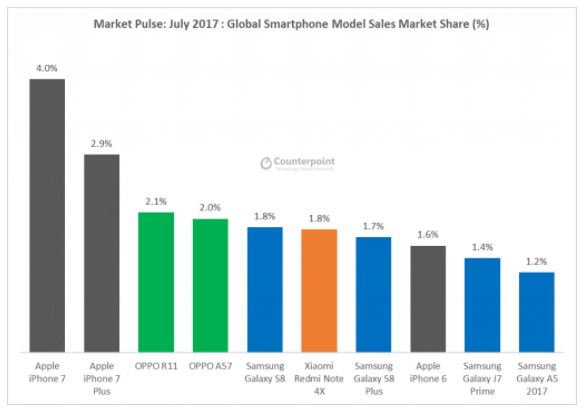 Huawei’s no show in the top 10 does have analysts concerned, with Counterpoint senior analyst, Pavel Naiya noting, “While Huawei climbed to be the world’s second largest brand overall, it is surprising to see none of its models breaking into the top ten rankings. This is due to a multiple SKU portfolio that currently lacks a true hero device. While having a diverse portfolio allows Huawei to fight on multiple fronts, it does little to build overall brand recognition; something Huawei badly needs if it is continue to gain share.”