One of the bigger participants at CES 2018, LG has placed a significant focus on its entertainment consumer devices in Las Vegas. To that end the South Korean manufacturer debuted a number of offerings designed for the living room, with two in particular standing out. As such those attending CES 2018 got to see LG's new 4K UHD Projector and Rollable 65" OLED TV up close and personal.

At this stage there are no fixed timelines for when these two devices will in fact be making their way into people's homes, but they do serve as a solid template for what LG is able to do in the field of display technology.

The Projector is more likely to find its way to consumers for now, and carries the distinction of being the company's first 4K UHD offering in this category. It also boasts the ability of projecting up to an 150" (diagonal) screen at a rate of 2 500 lumens, as well as supporting HDR10 content. It also has a pair of 7 watt onboard speakers, which will not outdo one's home speaker setup, but are rather intended to be used in areas outside of the living room.

This brings us to the other aspect of the 4K UHD Projector that LG is talking up, its portability. While LG does not list a specific weight, they do mention that its engineers have shrunk their 4K UHD technology into a form factor that isn't cumbersome to handle or install. 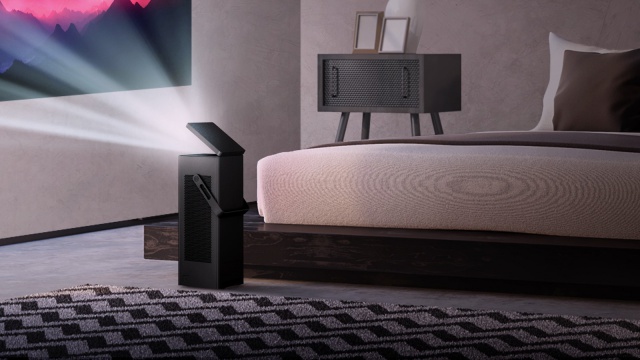 Moving onto the Rollable OLED TV, which is the next step in LG's continued plans for flexible display technology. They've been at it for some time, debuting different iterations of bendable screen, but this latest product is perhaps their most enticing yet. The 65" OLED TV also yields 4K visuals, along with being able to be rolled up and stored away discreetly should a user want.

While LG has not mentioned whether the display model on show at CES will make to retailers anytime soon, the company did state that they have larger versions of this technology on the way.

While the prospect of rollable display greater than 65" is an intriguing one, we're more interested to see how this technology can be placed into a smaller form factor, like a tablet or smartphone.