While Microsoft’s Tech Summit, which took place in Cape Town, had already been rich with insight, the value it had to offer was far from over.

Even as the need for digital transformation, the modern workspace and new tools focusing on fostering teamwork were explored, there were still developments around one of Microsoft’s major cloud offering, Microsoft Azure (formerly called Windows Azure), to delve into.

Victoria Grady, the general manager for Microsoft Azure, explained that cloud certainly heralds plenty of opportunities, but it also comes with new security threats. This means that it is not enough to just bring new cloud based solutions to the market, it has to be done securely.

With that in mind, she explained that Microsoft has adopted a particular approach to offering cloud technology, where its emphasis is on not just what services it can offer, but how it can offer them. More particularly, the ‘how’ entails empowering its customers to be successful in using cloud technology, and building a relationship beyond that of simply being another vendor in the space.

More particularly, the approach is based on four key areas - productivity, hybrid, intelligence and trust. 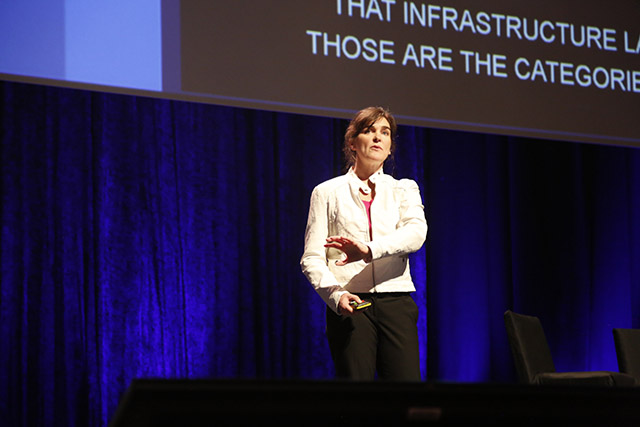 Grady unpacked each in greater depth, starting with productivity. “People are some of our most finite resources, so every time we ship a service we want to think about whether we doing so in a way that can empower developers and organisations to be as productive as possible,” she explained.

Out of the more than 140 services that can be found on Azure, Grady highlighted three that she recommended studying up on, highlighting them as “hot topics” that were raised by Microsoft’s customers.

The first of these is serverless technology. Put simply, this is a cloud computing model where cloud providers dynamically manage the allocation of machine resources. Rather than having to invest vast sums of money into servers and IT infrastructure that an organisation thinks it will need, it can instead pay based on the actual amount of resources consumed by an application,

Secondly, Grady noted logic apps as another area worth delving into. She pointed out that legacy systems that companies may have on premise need not be a burden. Rather, she encouraged viewing them as an asset that organisations could take advantage of as they moved into the cloud. “Logic apps are a great way to easily and quickly integrate with cloud technology even from an on premise environment,” she enthused.

The third briefly mentioned was container services, most particularly Kubernetes. This is an open-source system for automating deployment, scaling, and management of containerised applications. For a deep dive into Kubernetes, take a look at the video below.

Moving on, Grady turned her attention to the hybrid cloud environment, which is essentially a mixture of on-premise, public and private clouds. This, she asserted, is not a transitory state, as she does not believe that all companies will migrate to the public cloud overnight. “With that in mind, we wanted to ensure we could help organisations move to the cloud but do so in a way that addresses their computing environment holistically, all the way from on-premise up to the public cloud as one unified state,” she elaborated.

Indeed, reducing having disparate systems that aren’t well integrated has been a topic that has been talked about by many IT companies over the years. But how this is achieved has not always been the easiest to comprehend.

However, this was not the case with Microsoft’s approach to the issue. Put plainly, the company has a product called Azure Stack. This, explained Grady, is an extension of Azure, and brings all the power of the public cloud into a smaller version which could be run offline in a local environment, while still retaining the cloud app model that the Azure cloud offers.

Interestingly, Azure Stack is aimed at addressing very specific usage scenarios. The first of these is an environment that cannot rely on a consistent and durable online connection, such as a cruise ship or oil rig.

Another scenario is as a workaround for regulatory restrictions. Grady explained that, due to the diversity of geographic and industry requirements when it comes to compliance, there are areas where Microsoft cannot support Azure.

“For example, Ernst and Young run their global audit system in Azure's public cloud, but due to some local country laws and regulatory compliance issues in Russia, they are not allowed to have data leave that country. As Microsoft does not have a data centre in Russia, they deployed Azure Stack for the Russian client which enabled them to take advantage of one consistent app model across Azure and Azure Stack,” she explained.

Thirdly, Grady acknowledged that there are still many organisations that have legacy systems, perhaps running on a mainframe. “It's hard to lift and shift them overnight, so we think there is an opportunity for organisations to take Azure Stack into that datacentre environment, and put it next to that legacy system. The proximity would allow one to take advantage of the cloud app model even if your longer journey of moving to the cloud is further out,” she explained.

It’s all about the data

Moving beyond Azure Stack, Grady wrapped up her emphasis on the hybrid cloud by noting that companies need to consider data consistency.  “In order to have a truly hybrid model, organisations need to have data that flows fluidly between on-premise and public clouds,” she asserted. This can present both “huge” cost savings and increased efficiency benefits, as the costs otherwise associated with moving data can easily mount up.

“A lot of organisations recognise that there are cost savings to be had when they move from on-premise to the cloud, but what they often don’t consider is the transition process, where there can be massive savings as well. How you get there is really important,” she stressed.

With those two pillars covered, Grady next turned to one of the more futuristic sides of the cloud -  the use of artificial intelligence as well as the importance of trust. That however, will be detailed in the next part.