Microsoft adds a few new luminaries to the sky

At its glittering 2019 Partner of the Year Awards held this week in Houghton, Microsoft honored its partners with awards, thanks, praise - and for the winners, a star named after their company by NASA  itself.

The awards, which broadly recognized the company’s partners for developing excellent innovative solutions, fell into five categories - the Competency Awards, Business Awards, Strategic Awards, and the top of the heap, the MD Award. It was Accenture that won the latter. 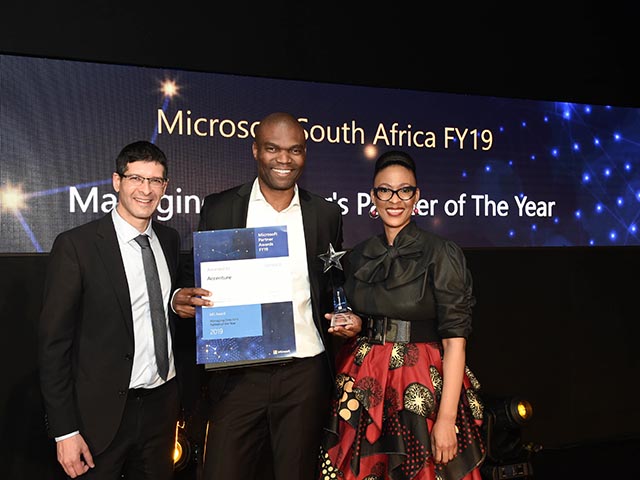 Lionel Moyal and Lillian Barnard from Microsoft present Accenture with its MD Award.

Lionel Moyal, Commercial Partner Director of Microsoft South Africa, elaborated that the awards represented “the best and most forward-thinking innovators coming out of our amazing partner community” in South Africa. “Every year I’m amazed by the creativity, dedication, and skill our partners demonstrate in building new solutions for customers on the Microsoft platform. And this year is no different. Our partners have delivered a true “master class” on how to bring technology to life and bring real-world, bottom-line value to customers, not just locally, but globally too,” he enthused.

While the speeches were kept to a minimum, Moyal did share some insights about the relevance of the awards, and working with partners,  to the bigger picture.

He noted that business is rapidly changing due to the Fourth Industrial Revolution, stressing that it is critical that technology is used to develop smart solutions to drive digital transformation and unlock better value for customers.

Talking to the future of work and other key opportunities through which customers’ success can be enabled, Moyal highlighted the power of Microsoft Teams and the Power Platform. “We’re at a tipping point here, and you, our partners, can help customers become digitally empowered, and forward-focused employers and employees, by encouraging adoption,” he said.

Moyal’s encouragement wasn’t just about software though. He stressed the importance of collaboration, and of working together within and across organisations, so as to succeed together.

He further made mention of the critical need for skills development. Rather than highlighting the unemployment rate, Moyal sounded a considerably more optimistic note. “We are seeing every industry embrace technology as almost every company is challenged with becoming more digital. That digital transformation actually represents a massive opportunity, particularly in South Africa,” he hinted.

Now, if a future astronaught or spacefarer lands on a star in our solar system referred to on the starmaps as Accenture, we will know where it got its name.

Preparing for the next disruption: 10 analytics trends to watch in 2022
Fitbit Versa