Motorola’s Safer Cities event in Cape Town this week held more than a few eye-opening revelations about technology pertaining to safe cities -  a topic that is quite literally becoming a matter of life and death.

While Motorola Solutions’ customers may be in the governmental and enterprise sphere, it quickly became apparent that its services and technologies could potentially affect just about everyone, particularly in the event of a public emergency. Indeed, the Motorola Solutions team emphasised that it is the public who most stand to benefit from Safer Cities.

Starting at the beginning

Vikela Rankin, the managing director of Motorola Solutions South Africa, went on to explain that the company’s aim was to enable first responders, security personnel and those working in the emergency medical field, amongst various others, to more effectively and efficiently do their job.

“It’s all about sharing information with those who need it the most, when they need it the most,” he explained.“There’s a huge amount of information flowing between citizens, responders and agencies. By turning noise into information, information into intelligence, and intelligence into actionable insight, public safety agencies can do the absolute most with less – building safer cities in the process,” he elaborated.

To this end, Rankin pointed out that Motorola Solutions (which is its own division independent from Motorola Mobility) had spent significant amounts of money on research and development (R&D) in order to develop the next generation technologies that it unveiled, and based on what we saw, it certainly showed. 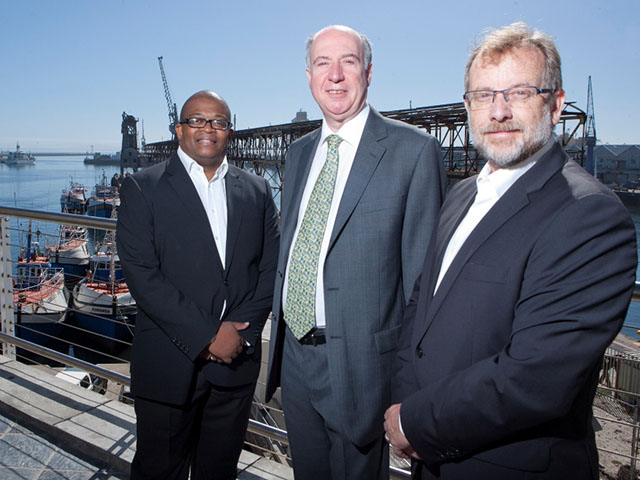 A number of these, for example, focused on enabling law enforcement to deal more efficiently with crime; both with solving crime once it had occurred, and preventing crime (including potential terrorist attacks) before they had a chance to cause damage. One of the unveiled solutions for example, centering on video surveillance, showed how vast amounts of security video footage (99% of which is never viewed) could be condensed, down from 24 hours into two minutes.

This is ingeniously accomplished by transposing video footage frames onto one another, so that only activity that is out of the ordinary stands out.  This would enable security control centres to more quickly pick up and respond to suspicious activity, such as someone intentionally leaving a bag (potentially containing a bomb) in a public place and walking away.

Also highlighted were products that enabled security personnel  to avail themselves of smarter, more technologically advanced communications devices and radios, which could at the press of a button call for help, send live-streaming video, and record and share photos for use in gathering evidence. Additionally, the company shared its very attainable vision for turning patrol vehicles into mobile crime-fighting command centres, an idea that would not be at all out of place in a futuristic Robocop movie. 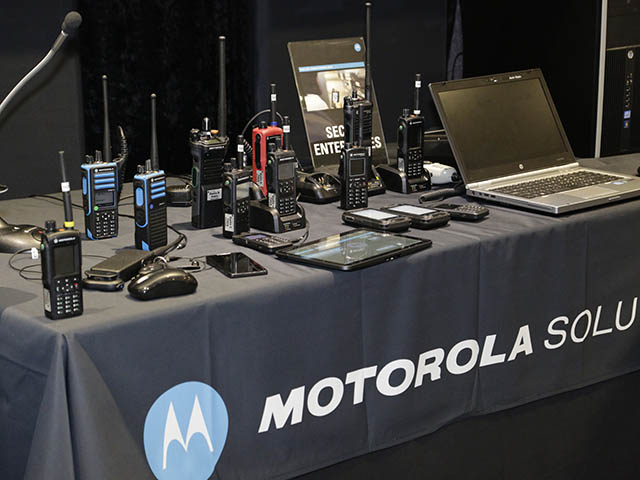 A panoplay of the different devices, radios and technologies from Motorola Solutions that fit into and enable the safe cities concept to come to life.

“Help is on the way”

However, it’s not just the law and dealing with criminal threats to public safety that was encompassed by Safer Cities technological advancement. Indeed, first responders, emergency medical personnel and firemen, often dealing with a crisis caused by environmental or natural factors, also need to be able to communicate quickly and efficiently with numerous agencies to respond to a natural disaster – and thus more easily save lives.

Many of the solutions unveiled by Motorola focused on serving this as well. For example Motorola Solutions showed how a control centre running its MotoBridge product could connect users on different devices and across various types of networks, enabling a first responder on a smartphone to speak to an officer using Motorola Solutions’s tech-laden Tetra radios and confer with someone else, for example, on a voice over IP network.

Peter Goulding, Motorola Solutions public safety specialist, stressed that creating safer cities wasn’t just about policing, but was rather about how a city could more efficiently use its information to make things better for those living within it.  Furthermore, he stressed how important it was for various agencies to be able to work together, and be able to better coordinate their joint response so as to “get the right response to the right person at the right time.” 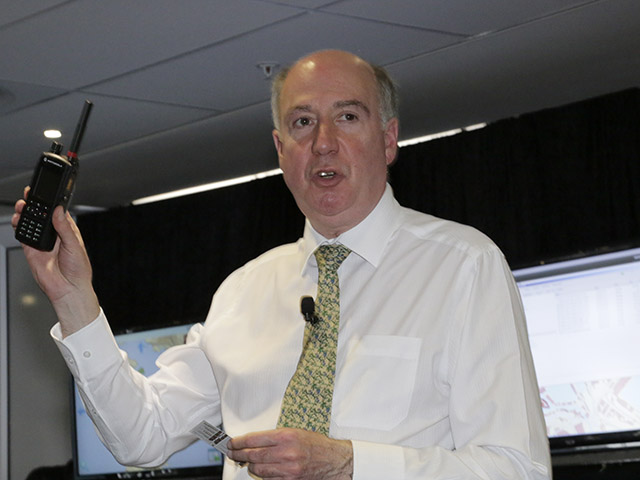 Peter Goulding, Motorola Solutions public safety specialist, was not shy about showing how tough the communication devices were - this one found itself thrown on the floor and treated like a football for the crime of being ruggedised and durable.

Goulding, who gives a very literal meaning to the words ‘street cred’, should know – he is the former chief superintendent at the London Metropolitan Police. He gave another example, no doubt pertinent to anyone who has ever been in an accident, or may ever have the misfortune to suffer one.

With the right technology, such as Motorola’s new Tetra radios, for example, paramedics would be able to send a patient’s medical information to an awaiting hospital when doing triage on them, as well as to the person’s GP. This would mean that while an accident victim was still on their way to the hospital, the attending physician and their personal doctor would be able to confer about their treatment, and ensure the person in question received the best care possible.

Another scenario given as to how safe cities technological advancements could aid in fighting fires was the use of augmented reality to give firefighters a heads up view of the layout of a burning room, before they entered it. 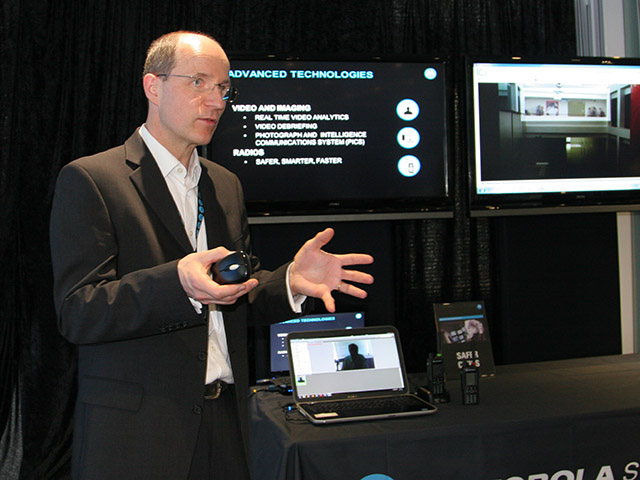 David Perry, EMEA Solutions Marketing for Motorola Solutions, explained that Motorola's devices could form an integral part of gathering degradable evidence, or sharing photos of missing children, with the company's new radios being equipped with a built in camera to this end.

One thing safe cities technology is not, is an idle expenditure or without justification. According to Mark Walker, the director of Insights and Vertical Industries at the IDC for Middle East, Turkey and Africa, the world is becoming an even more uncertain place, while globally political situations are becoming more complex.

He added that terror attacks, natural disasters and crimes have affected the lives of millions and inflicted damages of trillions of dollars in the last 20 years. Illustrating his point about the importance of safer cities, Walker explained that a natural disaster, like Hurricane Katrina, clearly showed how important quick and effective disaster management was, pointing out that, in its absence, within five days people were killing each other for food.

Furthermore, political instability that affected distribution of essential services or goods (food, water) could similarly have a profound impact on a city and its safety. Another factor at play was economic downturns which tended to spur on crime, or resulted in people leaving the city to seek jobs elsewhere. This, pointed out Walker, invariably led to a city imploding. 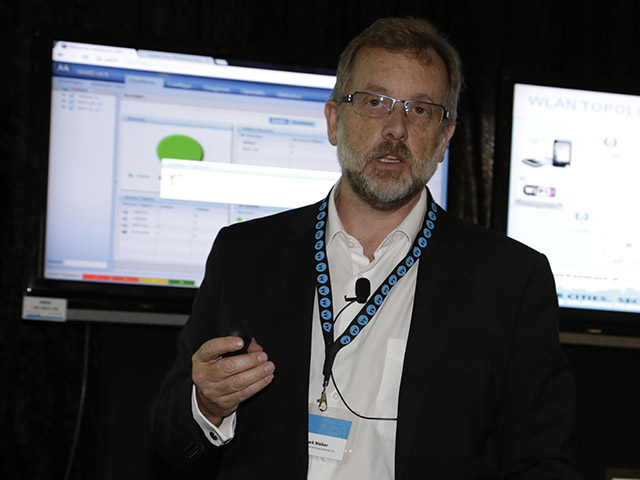 Mark Walker, the director of Insights and Vertical Industries at the IDC, warned that safe cities is becoming increasingly important as an issue, as political and economic uncertainty is on the increase.

Furthermore, Walker added that worldwide, homeland security spending was on the rise, from  €120 billion in 2009 to a predicted €215 billion by 2018. However, Walker did have some good news for South Africans. “Overall, the number of crimes committed per 1000 people in South Africa has decreased by 2.8% in 2012/3 and Public Safety investments are growing and will reach €10.2 billion in 2014,” he reported.

While cities may be tempted to try go all in, the Motorola Solutions team admitted that this was impractically expensive. Rather, cities would be more easily able to implement the various solutions on offer on a piecemeal basis, absorbing the cost over time. However, it quickly became clear that cities worldwide cannot afford to ignore the technology altogether.

Walker stressed that as there is more and more uncertainty in the world, safer cities become increasingly important. Only a day after the event and at the time of this writing, life was already illustrating Walker's point, with violent, politically-related action erupting in Johannesburg's city centre.

“The technologies needed to build smart public safety solutions are here now and action needs to be taken to implement them and create smart, viable, stable, prosperous and growing cities of the future," he concluded.