DStv subscribers utilising the Linux-powered DStv Explora will be able to record up to 220 hours of high definition (720p and 1080i) television, courtesy of its build-in 2 TB (2000 GB) hard-drive. According to Multichoice this capacity equates to enough storage space for around 100 movies or 150 TV series episodes. Users can also pause live TV for as much as two hours.

Multichoice has bundled three Java-based applications with the Explora, namely News24, Weather, and Supersport. All three have been redesigned for the new decoder to load much quicker. Besides a faster load time and enhanced design of the apps, users are also able to continue viewing their movie or show whilst using the app, similar to Samsung’s Pop-up video functionality.

Collins Khumalo, CEO of Multichoice South Africa, said that some additional features will be enabled for the decoder during the course of the next few months. These includes delivering content via broadband, setting remote recordings, and single-click BoxOffice rentals. 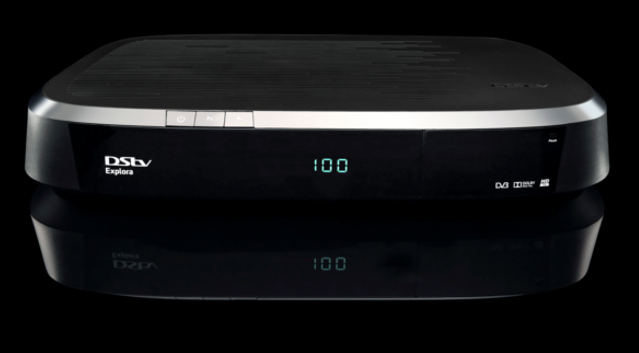 The DStv Explora employs a totally revamped user interface, which we found to be intuitive to use, and rather eye-catching during our brief hands-on session with the device. This interface is every bit as slick and graphically enticing as the UI of Apple TV for instance, with content being displayed using HD poster art for example. This interface is also easy enough to use, allowing users to quickly find their favourite shows or movies on BoxOffice.

The DStv Explora PVR will be available in retail stores from 15 August for a recommended retail price of R2 500.

“We constantly find ourselves dealing with the reality that South Africa lags behind the rest of the world in fixed broadband penetration,” said Collins Khumalo, CEO of Multichoice South Africa.

“In the absence of affordable high-speed broadband access for most South Africans, delivering our content via satellite remains the most reliable way to ensure that our customers have the best viewing experience, without buffering or waiting for downloads. We want to provide our customers with a rich, high-definition video-on-demand experience, similar to what they would get in markets where broadband is a lot more accessible. We developed the DStv Explora to achieve this vision,” Khumalo added.

In other TV set top box related news, Google recently unveiled its new ChromeCast TV dongle, which plugs into a TV’s HDMI port to enables users to stream online multimedia content to their TV from a multitude of devices including tablets, smartphones and notebooks.