New notebooks launched by Acer as it commits to renewable energy

It was a good day yesterday for Acer at their Next@Acer 2021 event, as they launched a range of new notebooks, Chromebooks, gaming PCs, notebooks and screens.  The company also committed to achieve 100% renewable energy use by 2035, and through its Earthion platform, Acer aims to address environmental challenges. Which brings us neatly to the Acer Aspire Vero, the first product within the Earthion platform.

The Vero notebook points the company in a more sustainable direction, with post-consumer recycled (PCR) plastic used throughout the device’s chassis and keyboard caps. This carries through to the packaging, with the Vero shipping in a box made from 80-85% recycled paper pulp, and the notebook bag and the sheet between the keyboard and screen made with 100% industrial recycled plastic. This emphasis on sustainability carries over to the design language too. All graphics on the shipping box are printed with soy ink, and the notebook itself contains no paint on the chassis, reducing the impact on the environment. It is held together by easily-accessible, standardised screws for a simpler disassembly process. The notebook stands out with unique yellow and volcano grey accents on its bumpers, and the text on the R and E keys have been inverted, calling out the 3 Re’s: reduce, reuse and recycle.

The latest 11th Gen Intel Core processor with Intel Iris Xe graphics lets it power through daily productivity tasks and more, while up to 1 TB of M.2 SSD storage gives users plenty of space to store music, movies and files, according to Acer.

While the Vero shows what could be done with all notebooks in future, the reality is that it will take a while to get there. Meaning these green features won’t be found on the Acer TravelMate P6 series, instead it includes further updates for Acer’s thin-and-light offerings for professionals. There are differentiations between the TravelMate Spin P6 and the regular TravelMate P6, with the Spin being a convertible of sorts, coming with a stylus and a Corning Gorilla Glass touch display that can be rotated 360 degrees into four modes to show presentations or watch movies on. On the regular P6 Acer promises an excellent battery life of 20 hours, while it also comes a $100 cheaper, according to Acer.

Both include Wi-Fi 6, Windows 10 Pro, a PrivacyPanel that limits viewing angle to 90-degrees, a backlit keyboard, dual speakers, a four-way mic array and a smart amplifier for better sound.

The Swift series also saw an upgrade in the form of the Swift X, now featuring discrete graphics. This comes in the form of the NVIDIA GeForce RTX 3050 Ti Laptop GPU, based on NVIDIA’s Ampere architecture, combined with up to an AMD Ryzen 7 5800U mobile processor and 16 GB of RAM. 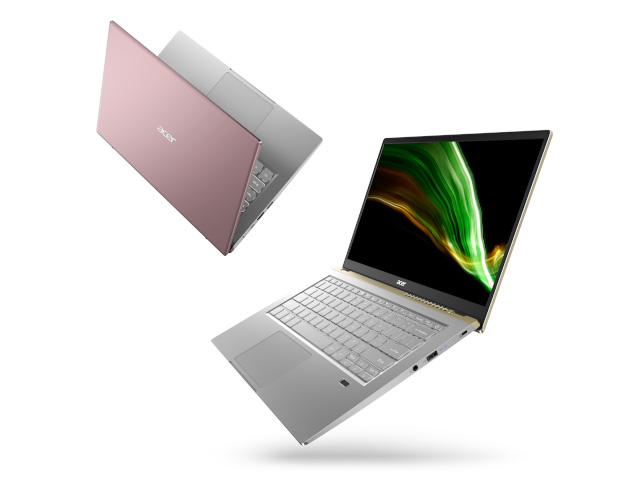 The Swift X is more aimed towards professionals than gamers, although part time gamers might smile at the prospect of having this for work and play. Acer promises 17 hours of battery life combined with a 14-inch FHD IPS, Wi-Fi 6 and a 1.39 kg body, which makes this a decent prospect if content creation is also on your radar.

We'll update this article with local prices and arrival time in South Africa when we receive it.