Next Samsung Smartwatch rumoured to have round face, rotating bezel

The smartwatch trend shows no signs of losing momentum in 2015, especially as local consumers patiently (or should that be anxiously?) await the arrival of the Apple Watch. It should come as no surprise then that specs for Samsung's latest smartwatch offering have begun churning the rumour mill.

According to Sammobile, the South Korean manufacturer could be working on a round face smartwatch, with the possibility of a rotating bezel for on-device navigation. Sammobile's postulations are a result of a Samsung Gear SDK they "stumbled" across, which features a series of images to help developers better understand the desired interface that Samsung is going for.

A round face does not seem that radical, especially as Samsung has played around with square form factors for its first Galaxy Gear (review) smartwatch and rectangular ones for the Gear S. More interesting though is the inclusion of a rotating bezel, a feature we're yet to see on a smartwatch. According to the Gear SDK, this bezel is not simply superficial, but rather design for on-device navigation, in a similar way to the Apple Watch's side-mounted digital crown. 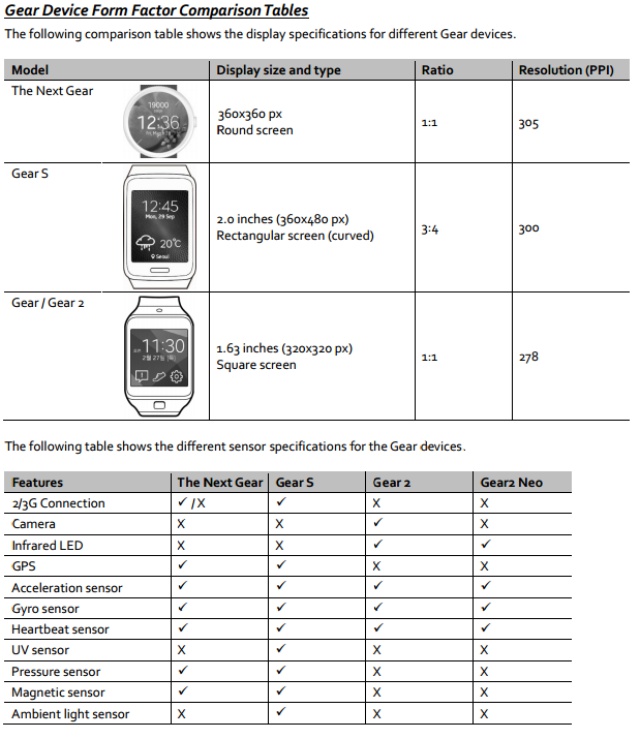 Along with the rendered images of the next Gear device, a list of on-device specs was also detailed. In it, there appears to be no on-board camera, or infrared LED sensor. There is however a heartbeat sensor, as well as an accelerometer and gyrometer, which will most likely be utilised for health and fitness applications.

Although the finer details are unknown at this stage, Sammobile expects the new Gear Smartwatch to debut at IFA 2015 in September this year.