It's been a long time coming, but Twitter has finally brought its live streaming video service Periscope over to Android. For users that tout a device sporting Android 4.4 (KitKat) or better, the live video broadcasting app is now available to freely download from the Google Play Store.

Although the wait has been long, Twitter made the announcement about their new app's impending arrival via its blog yesterday. "As a small startup, our initial launch was limited to just iOS, but we’ve been working really hard to craft an experience that feels special on Android, yet still unmistakably Periscope. Today, we’re excited to announce the launch of Periscope on Android." 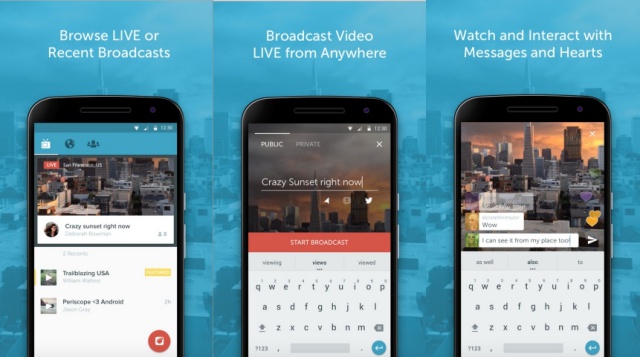 According to Twitter, Periscope on Android has all the same core features that iOS Periscope users have become familiar with. These include the ability to start a public or private broadcast, choose to allow comments from just those you follow, and the ability to interact with a broadcaster by chatting or sending hearts.

That said, there are also a few things that are unique to Android:

Added to the above listed Android-specific features, Periscope on Android will make it easy for users to resume on the app where they left off. To that end, replays are saved without requiring the broadcaster to upload a file, which should save broadcasters some time.

For more updates on this live video streaming app, follow Periscope at @periscopeco to stay updated.