In the face of toughening camera tech competition on the smartphone front coming from Nokia and Apple, Samsung Electronics has announced its new advanced pixel technology for CMOS image sensors dubbed ISOCELL.

According to the Korean tech giant, this new imaging technology substantially increases light sensitivity and also effectively controls the absorption of electrons, culminating in higher colour fidelity even whilst shooting in poor lighting conditions. Additionally, ISOCELL aims to sharpen the image quality from smartphones and tablets equipped with this new sensor technology.

Samsung said that its ISOCELL technology forms a physical barrier between neighbouring pixels in order to isolate each pixel. This isolation apparently enables more photons to be collected from the micro-lens, boosting the image quality.

Furthermore, the company asserts that its ISOCELL technology delivers greater colour fidelity by reducing electrical crosstalk between pixels by around 30% compared to a conventional BSI (backside illuminated) image sensor. 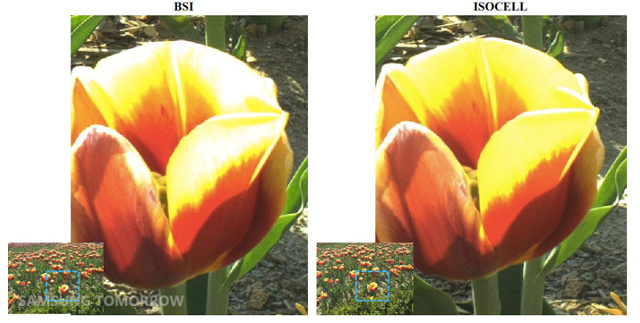 The Suwon-based firm added that an ISOCELL sensor can be used in slim and small form factor mobile devices since the sensor feature a 20% wider chief ray angle, resulting in a reduction of the height of the camera module.

Samsung stated that the first image sensor to adopt this new technology will be its S5K4H5YB 8 megapixel imager, which is currently sampling to customers, with mass production scheduled for Q4 2013.

In related news, Samsung Electronics also recently revealed its heterogeneous multiprocessing (HMP) solution for the Exynos 5 Octa, which will enable the eight-core processor to employ all of its cores at the same time.