The South African success stories are emerging fast and furious this month, with each being distinctive in their own right. The latest comes from a duo of game developers, who launched the first indie title from South Africa to make it onto Nintendo’s Switch.

Debuting their game, named Semblance, at a press event in Sandton City yesterday, one gets the impression that their three year journey has been a wild and unpredictable ride.

Journey of a single step

Ben Myres and Cukia Kimani explained how what started as a university project culminated in them travelling around the world and working with Nintendo to launch their game onto its popular Switch console.

The latter, Myres notes, was an intricate process, requiring them to tick a number of boxes and ensure that quality control was up scratch and met with Nintendo’s approval. Numerous patches, bug fixes and modifications latter though, it has arrived on the Nintendo Switch store and is currently available.

Getting it across the finish line was no mean feat. Myres explained that one of the challenges they faced was that they had to get Semblance out there to the gaming industry at large. As few publishers are represented in South Africa, this meant extensive travelling beyond South Africa’s borders and attending a variety of gaming conventions. 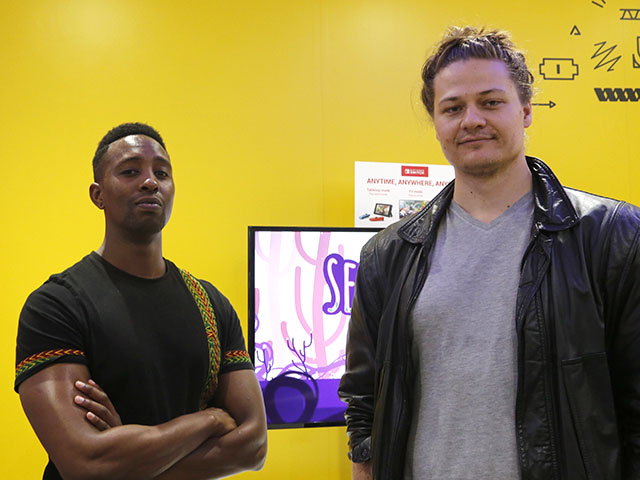 What makes Semblance remarkable though is not just the fact that it came from the minds of those fresh to the industry. Rather, it is the concept itself, which turns the platforming genre on its head and introduces an innovative mechanic where players can deform the world around them at will to proceed through its levels. And, if that fails, they can deform themselves, transforming from a dark black creature with two eyes into a malleable flat disc as need be.

Interestingly, proving that there is such a thing as the happy accident, this mechanic was actually born out of a glitch. Rather than ‘fixing’ it out of existence, Myers expanded on it to make it part of navigating through and across the title’s varying terrains.

With regards to the game’s story, who and what its creature is, and why its journey is all about, the team explained that it is meant to be highly ambiguous, with players largely  interpreting - and hopefully discussing it - for themselves.

While Semblance is available for PC on Steam, in playing through a bit of it I could not help feeling that it’s true home is on the Switch, as it is the ideal type of game for pick up and play.

As for advice to other local developers looking to hit the international market, Myers recommends starting out at a game development company and learning the ins-and-out of the trade and industry from there.

You can take a look at Semblance in action below, and if you are so inclined, find it on the Switch store for R117.