Another of the standouts from Computex appears to be surround screen PC gaming. For example, at MSI’s stand, the company demonstrated what two of its GTX 780Ti  3G graphics cards could do, connected in tandem. Firstly, the company explained that users don’t necessarily need two cards to enjoy surround view (a game spread across up to four displays); as one would also suffice.

More importantly for how well a game performs, we were told, is the card’s memory – in this case, a healthy 3 GB of dedicated VRAM. That of course didn’t stop MSI from showing what PC gamers could anticipate. Quite bluntly, in our brief time spent at the demo, we have never seen Assassin’s Creed: Black Flag look so good or run so mouth-wateringly smoothly, which is saying a great deal, considering that it’s a very pretty and natively smooth game to start with. 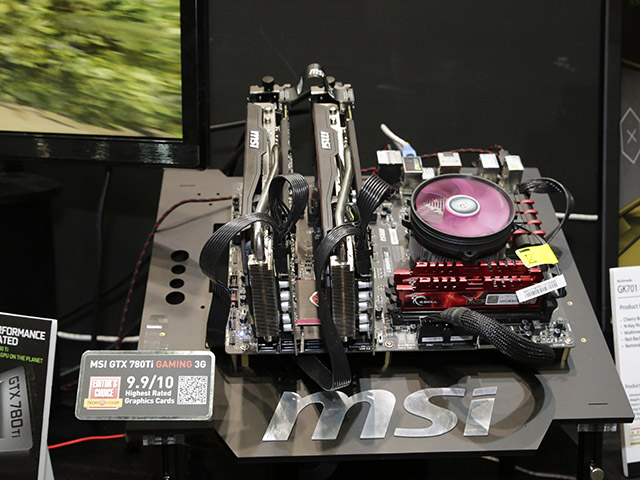 It does seem as though surround PC gaming – the standard appears to be three 22” monitors – is a bit of a trend at Computex this year. However, of what we’ve seen so far, we would have to call it a tie between the Aorus X7’s treatment of the trend and MSI’s, as both seemed more than able to output HD gaming across multiple screens without so much as breaking a sweat.