Traffic is one of the banes of urban living, and if the recently released Traffic Index by TomTom is anything to go by, South Africa is proving woefully inept at dealing with it.

The Traffic Index itself has collected commuter and traffic data from more 200 cities across the globe, highlighting the impact that traffic is having in each. Along with the Index, TomTom has also launched an interactive website to showcase their findings.

According to TomTom Traffic data, South Africa's three largest metros, Cape Town, Johannesburg and Pretoria, all seemed to buck the global traffic congestion trends. Across the world's major cities, the evening rush hour registers as the time for the greatest congestion, nearly doubling one's commute. In South Africa however, it is the morning commute that results in the most congestion and additional time spent travelling. 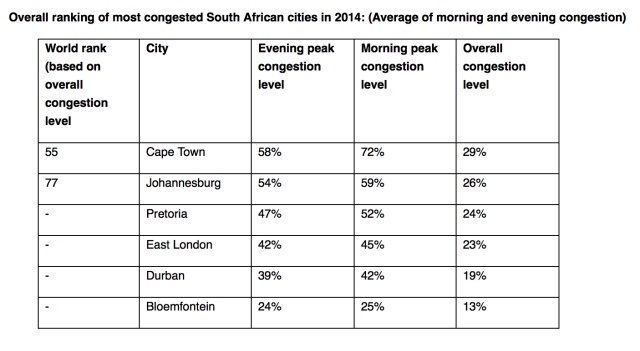 South Africa is "unique in its position" as TomTom terms it, with Cape Town viewed as the most congested city in the country, and ranking 66th globally. According to TomTom, morning commutes in the Mother City adds up to 72% to travel time throughout the year. Egoli did not fare any better, sitting at 77 globally, with morning travel totalling up to 59% to commuting time. Evening travel congestion in both cities is slightly better, but still sits at a worrying 58% and 54% in Cape Town and Johannesburg respectively.

The nation's capital has also seen a steep increase in travel congestion, as Pretoria has overtaken East London as the third most congested city in South Africa, with an overall congestion level of 24%. Interestingly for Gauteng, the most congested traffic day was 3 February 2014, which saw the province ravaged by adverse weather that lead to localised floods.

As far as the rest of the world goes, Turkey's capital Istanbul claims the number one spot at 58%. Coming in second is the expansive and densely populated Mexico City with 55%, and getting the bronze is Rio De Janeiro at 51%. Coincidentally Brazil has three cities ranking in the top 10, which will certainly be cause for concern.

According to Carey Dodd, marketing manager for TomTom SA, the company’s mission is “to reduce traffic congestion for everyone.” Dodd advocates that, "Road authorities and local governments can use TomTom’s traffic data to better manage traffic flow during the rush hour." Furthermore, TomTom, "can help businesses plan smarter working hours to help their employees avoid travelling during rush hour. And we give drivers the real-time traffic information and smart routing they need to avoid congested roads and get there faster,” concludes Dodd.