It could simply be a coincidence, or perhaps a shrewdly timed announcement, but the former CEO of Opera, Jon Von Tetzchner has just debuted his new cross-platform web browser Vivaldi. The announcement comes a few short days after Microsoft said that it would drop Internet Explorer from Windows 10.

We may be guilty of reading too much into it, but if Vivaldi can become the alternative web browser for users who don't have a fondness for Chrome or the yet-to-be-named Project Spartan offering from Microsoft, Von Tetzchner might just have a winner on his hands.Added to this, Vivaldi is not simply limited to Windows systems, as Linux and Mac are also catered for.

A few glimpses of Vivaldi certainly reveal some influence from Opera, such as the mouse-gesture enabled speed dial feature, which displays a user's' favourite site tabs on a new tab page. Vivaldi does not simply mimic however. For example, multiple open tabs can be combined into one tab, based on topic. Such a feature could have specific benefits for students doing research or other "power users" as Von Tetzchner words it, as Vivaldi is being dubbed as a feature rich web browser by its developer. Another built-in feature is the ability to take notes, much like one of the features that Microsoft's Project Spartan touts.

As far as looks go, Vivaldi seems to merge elements of Apple's Safari browser and Google's Chrome. The new tab startup page for example is highly reminiscent of the look and feel of Safari circa Mac OS X Snow Leopard. There are also nods to Chrome, with a sleek and simple address bar, as well as side located menu tabs.

Von Tetzchner has high hopes for Vivaldi, which he founded in December 2013. A little over one year later, and this new web browser is the company's first offering, with power users in mind. 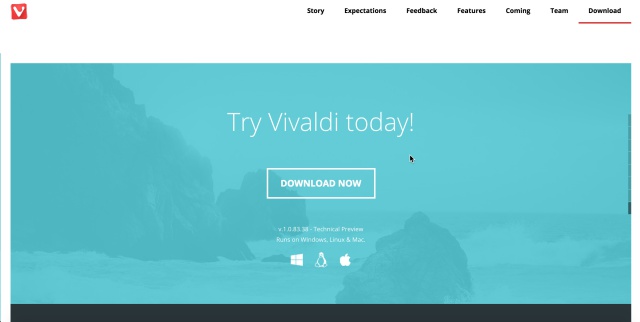 Still in the very early days of release, only time will see if Von Tetzchner can usurp his former company. Windows, Mac and Linux users can download Vivaldi for free here.