Will Windows 11 be the new king of the OS hill?

With the recent launch of Windows 11, which has been available since the 5th of this month, Microsoft made its case to encourage those who can to consider upgrading from Windows 10 to their latest iteration of their OS.

In introducing Windows 11, Microsoft certainly has its work cut out for them, primarily because of the strength of Windows 10, which has shaped up to be its best version of Windows to date. Whether Windows 11 can take its crown, remains to be seen, but clearly, Windows 11 is certainly going to try.

Admittedly, the announcement of Windows 11 earlier this year came as a surprise. After all, Windows 10 was previously touted by the company as being its last version of Windows, with new features slated to be added via updates.

While a brand new version of Windows seems like a reversal of that initial strategy, based on what we saw at a press briefing late last week, it looks like it is the reversal with good reason, boasting features we never knew we needed – and some features that we definitely know we want.

Some of the outstanding features showcased last week include Snap Layouts and Groups that the company noted will enable users to more easily optimize their screen real estate, creating split screens and multiple desktops in a variety of configurations. Having a zoom session open in one window, email in another and word in a third, sized to your liking, is essential for multitasking. And yes, you can do it manually, and there are third party apps that enable it, but it is mostly cumbersome (or an extra cost respectively) at present.

Furthermore, the OS will deliver multiple desktops. While we don’t share our PC with children, we do switch between different profiles and layouts from one day to the next, and don’t necessarily want to close running apps when we change from a more productivity type workflow to a more creative one, where having scores of documents open just gets in the way. As well, the OS caters more fully to Android devices and apps, so if you have an Android smartphone and you always wanted to access its apps on your PC, then this feature should make you happy (and yes, Samsung users have been able to do this for a while, and it is terrific).

Additionally, the new design looks considerably more futuristic, with flatter icons, and more in keeping with the 21st century. And being able to shift the start menu to the centre of the taskbar and quite literally keeping it front and centre is a welcome move (although you can offset it to the left if you prefer). 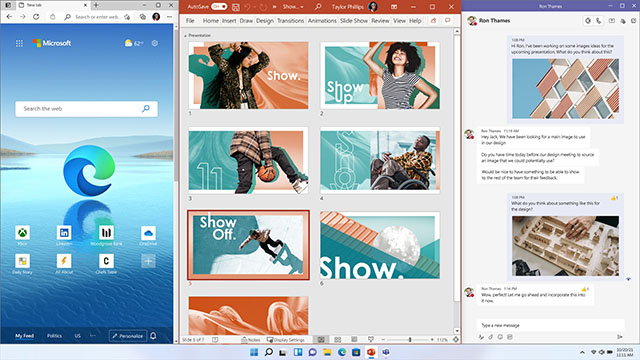 Welcome to the hybrid world

One point the company made clear is that Windows 11 has been built with the hybrid worklife in mind. It makes sense, especially, since the pandemic has forced pretty much everyone to get used to remote working. As offices begin opening up again, the common wisdom is that we will see more hybrid workforce scenarios, where we transition between working from home and working in an office as a matter of course.

It also means that in all likelihood as it has been the past 18 months, one's PC will remain the go-to destination for work, entertainment, commmunication and creativity. We are certainly not done with figuring out how to balance work and life, working a business while working from home, or being productive and having fun.

The point is that videoconferencing isn’t going away, and therefore the new OS has been designed around making working collaboratively more accessible than ever. For instance, Chat from Teams has been integrated into the taskbar which means that connecting with people using Microsoft’s collaborative app should be easier than ever.

Another new feature capturing our attention is Widgets. This is a personalized feed which is intended to make information that is important to you even more accessible.

Windows 11 is not just about work though. Microsoft stressed that the new OS has been made for gaming, boasting the likes of AutoHDR and DirectStorage. As well, Windows 11 has integrated the Xbox App, enabling players to more easily browse and download their PC games from the Xbox Game Pass Ultimate and PC library. 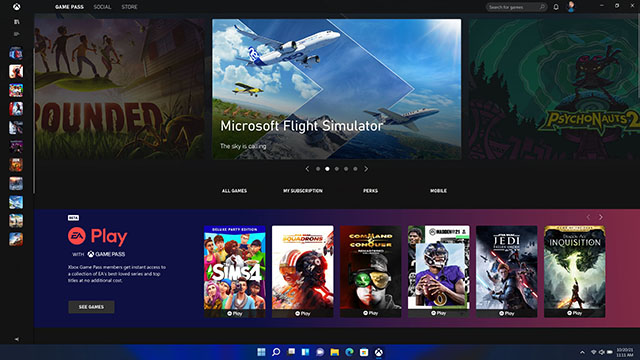 Along similar lines, Windows 11 also brings with it a redesigned Microsoft Store, which the company has promised will make it easier for people to find and browse their apps and games. Perhaps the ‘feature’ that will compel most users currently running Windows 10, on compatible PCs to upgrade is the fact that it is a free upgrade. And users will have a (pardon the pun) window of time after the upgrade to revert back to Windows 10 if they don’t like the new OS.

With all these features, should you rush to upgrade right away? Not so fast. As a first version, there are some issues showing that need to be resolved. For example, some users are experiencing a broken Start menu and Taskbar. Others are reporting Wi-Fi issues and thus slow internet and streaming. The good news is that a patch is apparently (inevitably) in the works to address and squash the bugs showing up, and if it follows tradition, it won’t be the first one.

More seriously, more than one cybersecuritysecurity company we have spoken to this week noted that the advent of a new OS also has cybercriminals very interested in what new security flaws they can take advantage of, to their benefit and users’ detriment. And then there is the issue of legacy applications, particularly in businesses, which may have initial teething problems.

Our best advice therefore is to pull up a seat and wait it out for a couple of weeks. Let the OS find its feet, for the forthcoming inevitable updates to land, and then, if you can, go ahead and see for yourself whether Windows 11 is the next best Windows OS.