The opportunity to don Batman's cowl is too good to pass up, which is which why the E3 2016 announcement trailer for Rocksteady's Batman: Arkham VR title has garnered 1.6 million views and 12k-plus likes to date. The Arkham franchise developers have been drip-feeding us information about this PlayStation VR (PSVR) exclusive, but this weekend's rAge Expo serves up a ten minute demo for gamers to enjoy and get their feet wet on Sony's impending VR system.

The demo is the same as the one posted by IGN earlier in the week, and sees gamers play as Bruce Wayne, coming to grips with Batman's weapons as you enter the Batcave. It starts off in the family manor, as you get your bearings while wielding the dual PlayStation controllers. They offer a great deal of subtlety, and take some time to get use, especially when trying to interact with objects just out of reach. As such, you need to quickly learning that leaning and stepping while wearing the PSVR headset is a natural part of the experience.

This plays out in particular while unlocking the piano in the early part of the demo, as well as interacting with tubes and controls on the main console while in the Batcave. The process does indeed take some time to get use to, but also feels quite cumbersome and slow at times. How well this will translate to the quick and fluid fighting mechanics that gamers are likely expecting for Batman: Arkham VR remains to be seen. 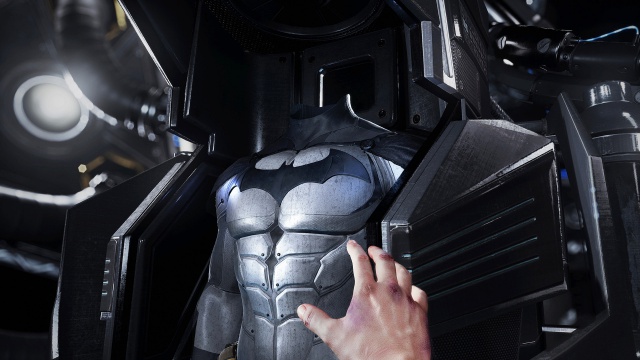 Instead, we think this title will be less focused wit fighting and more on using Batman's weapons and tools to solve mysteries. The Caped Crusader is a master detective after all. Another key feature will be little easter eggs littered throughout the game. Inside the Batcave for example, is a giant T-Rex, which is a nod to the comic books. The rest of the game will also have this subtle elements, which has also been a hallmark of the Arkham franchise in general.

While this is only a demo, which is certainly only a snippet of what the fully fledged version will entail, those that expect an storyline or experience akin to the previous Arkham titles may be a tad disappointed. For now, the allure of Batman: Arkham VR is that it is a new experience and one that any PS4 owner, or interested VR gamer will likely enjoy.