One of the last things we want to be paying attention to while working, is managing our internet security package. It should update quietly at an appropriate time (preferably not after boot-up), not distract with constant notifications, but of course provide effective protection when needed. This is indeed the case with Kaspersky Lab’s Internet Security (KIS) 2012. Like most similar packages it required a fair amount of input from our side at installation, but after this initial phase we were rarely bothered by it.

KIS 2012 hides a lot of functionality, which can all be found either in the main control panel or via a rather large control “icon” that resides on your desktop (yes it is removable). The package boasts a redesigned user interface, which although more minimalistic, still requires a fair amount of familiarisation before receiving the most benefits from this quite powerful package. 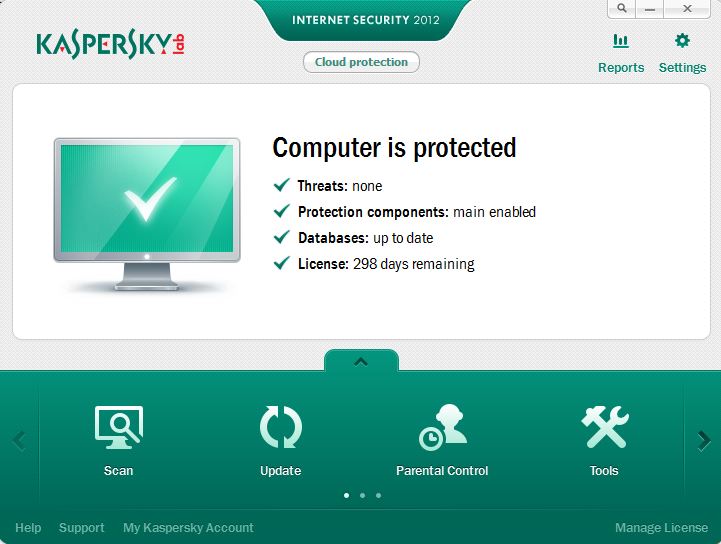 On the main screen you’ll find a PC representing the current state of your computer’s protection, and tells you whether your database is up to date and how many days before your license expires. Directly underneath are some of the main focus areas of the package, including Scan, Update, Parental controls and Tools. It’s important to look into these in more detail.

Under Scan you have four choices, including the common Full system scan and the less intensive Critical areas scans. Also onboard is a Vulnerability scan that checks for key exposed areas on your PC. On our system for example it was concerned about the Autorun functionality that is allowed for removable media and network drives. A nice little touch under Scan is also a drag-and-drop area where you can easily check files you are concerned about. 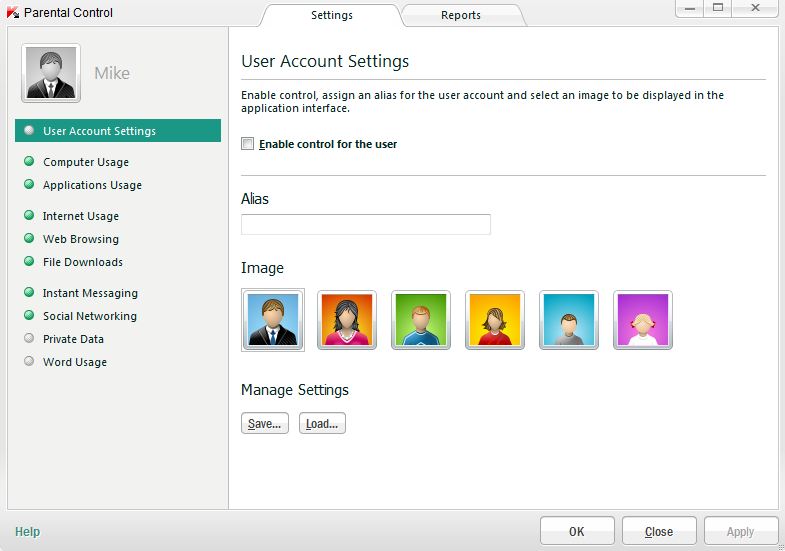 The Parental control option is very extensive, allowing one to block or limit usage not only of the PC, but also of certain key applications such as media players. As can be expected it’s also possible to block websites via keywords, disable certain files from downloading (such as music or video), as well as control instant messaging or social networking, although this turned out more complicated than expected. Different users can be treated separately, while access to the Parental control option is protected via password.

Under Tools you have the ability to create a bootable DVD or USB drive in case your PC has been severely affected by a virus to such an extent that it does not want to boot correctly. It can take a bit of time to fashion such a drive, but the process can run in the background. Also to be found here is Microsoft Windows Troubleshooting, a privacy cleaner and the ability to configure Internet Explorer’s setting from a security point of view (but unfortunately not any other browsers).

Kaspersky allows you to expand the main areas tab to give access to extra features such as Applications Activity to see what apps are using up resources, a Network Monitor on which you can check and block internet traffic, and a Quarantine area that’s almost like a safe zone for possibly infected files. Two more features you’ll find helpful, especially if you are concerned about doing online banking – a Virtual Keyboard that allows you to type in passwords without using your keyboard, while a Safe Run for Websites adds an extra layer of security around a specific website, also allowing a spiffy green border round the browser.

Protection does not stop there though, since a number of features can also be accessed via the Settings button in the top right corner. Here you’ll find File-, Mail-, Web- and IM anti-virus as well as your Firewall, Application Control as well as Proactive Defence. These are activated by default, and under Settings you can either turn if off or change how it operates. A brief word needs to go to the System Watcher option, which includes the ability to roll-back your system to a previous “safe” state before an opened malicious application did damage to your PC. For gamers you also have the option to activate a Gaming Profile (located in Advanced Settings), which will stop scheduled scans, notifications and updates from ruining an impressive kill. 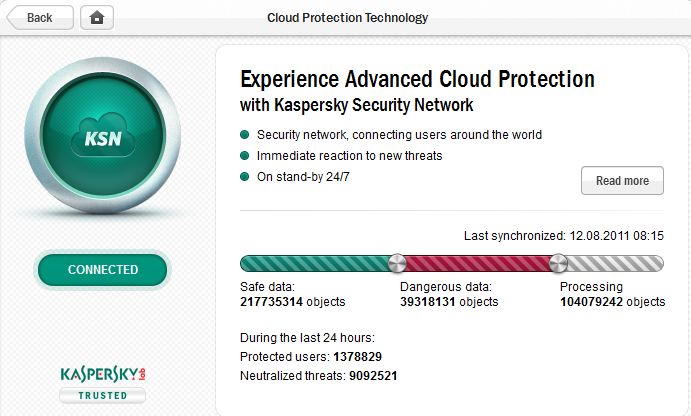 KIS 2012 benefits from improved cloud protection provided by the Kaspersky Security Network. This network monitors data coming in from all Kaspersky users connected to it, building a database of safe downloads, malicious applications and potential threats. When downloading a new application for example, KIS will tell you that this has been downloaded x-amount of times by Kaspersky users and if it’s generally considered safe or not. (For more on Cloud security, read our interview with Kaspersky Lab's chief technological officer, Nikolay Grebennikov.)

Kaspersky Internet Security 2012 is a very comprehensive security package which is quiet but effective. For the more demanding PC boffin there’s a lot of functionality built into the software, while users that simply want protection from viruses and the ability to safely surf the net are also neatly catered too. The added benefit of hybrid protection via the cloud ensures that the Kaspersky package keeps up with evolving threats and malicious applications, while not straining your system by running complex processes. The KIS 2012 package a solid investment and retails in the region of R399 for a one-user one-year license, while a three user license retails for R499. Download the free 30-day trial here.

Cons:
Pricey
Although refined, the user interface can still improve