HOMEREVIEWSNEWSBUSINESSCONTACTMAGAZINE
You are in: HOME > News
PREVIOUS ARTICLENEXT ARTICLE INTERVIEWS

Iron Mountain - Rising to the challenge of data co...
0
comments

In anticipation of THQ's upcoming US invading first person shooter Homefront, TechSmart had the opportunity to ask the big-wigs at developers Kaos Studios and publishers THQ a few questions surrounding the game. David Votypka, general manager at Kaos Studios and Frank DeLise, executive producer at THQ, gave us a brief introduction to the war-torn, post invasion battlefield of Homefront.

Homefront: In single player, it's our setting and story, and the resulting emotional punch that Homefront delivers that we think really sets it apart - but there are differences from a gameplay perspective too.

Typically, the current glut of modern shooters cast you as a highly trained bad-ass with all the best kit, and a wave of military hardware to support you. In Homefront, the enemy has that military superiority. So in a lot of the single player campaign, you are the one being hunted or chased through the level. Rather than have someone bark "Take objective A" in your ear, you are the guy on objective A and it's about to be taken from you. And when you fall back to "B", they'll come and take that too. You'll be constantly outnumbered and outgunned, so guerrilla tactics, hit and run strategies are a necessity.

TS: We've heard a lot of how Homefront on the PC will be a unique experience and not just a console port, are there any particular PC-only features that you're excited about?

HF: We've added a ton of features to the PC version, from gameplay enhancements like advanced flight controls for aircraft and first person cockpit views, to tools for the online community like a match recorder. I guess the most exciting is the dedicated server executable we'll be shipping post launch to allow PC gamers to set up and host their own Homefront servers.

TS: In particular we've heard that 3D support will be heading to the PC. Is this true, and will it also be extended to the PS3 and Xbox 360?

HF: Homefront supports 3D on PC only, thanks to NVidia's 3D Vision technology, which you've no doubt seen in action on other titles. We don't support 3D on Xbox 360 or PS3.

TS: Among the many features it was said that PC players will have access to more in-depth vehicle controls. What exactly will be the difference between driving or flying on PC and on Xbox for example?

HF: On console, and on the default "Rookie" setting on PC, helicopters are designed to be easy to pick up and play with.

We've added two additional settings for PC players - Veteran and Ace - each setting involves a more realistic and complex flight model, meaning the aircraft are more difficult to control, but reward the player who masters them with enhanced manoeuvrability. 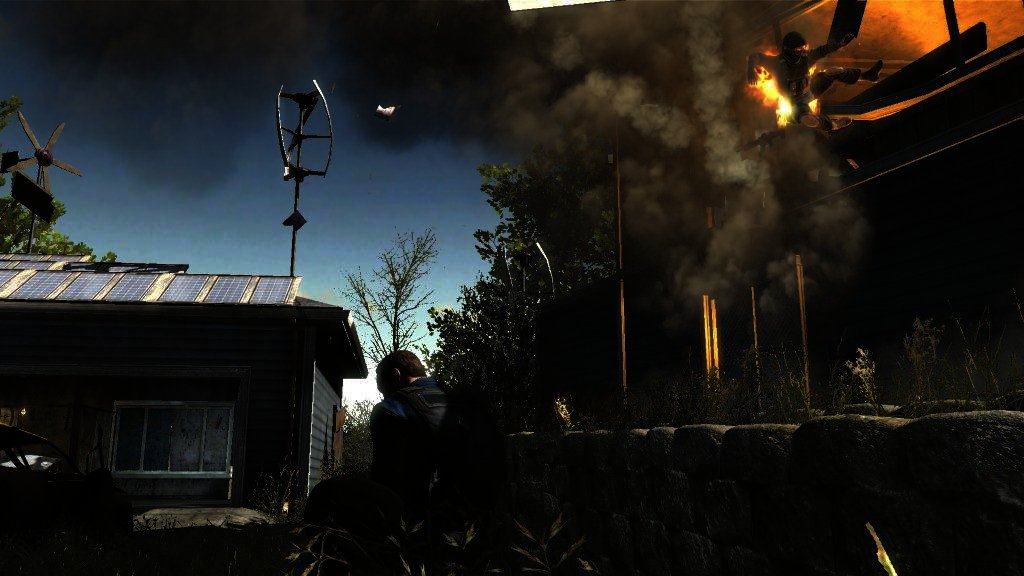 TS: What different types of vehicles can players look forward to controlling in Homefront?

HF: We've included five basic types in multiplayer: the Humvee for fast point capture; a Light Armoured Vehicle with anti-air capabilities; the Tank that's great for anti-infantry and anti-armour; and two helicopters including the Apache which is our deadliest vehicle (in the right hands!)

TS: We've heard that Homefront won't necessarily have to be a frantic gun battle from start to finish, and that players will be able to explore their environment and interact with characters in it to a greater extent. What interactions can we expect to see in Homefront when the bullets stop flying?

HF: We deliberately add what we call "why we fight" moments to break up the action, change the pace of the game and allow the player to discover more about the world of Homefront. The Resistance camp you encounter early on is a great example of this - you'll be able to explore the environment, and see how the resistance live off the grid under the shadow of Occupation.

TS: So the year is 2027, what kind of futuristic toys can gamers expect to play with in Homefront?

HF: Our future history is a dystopian one, with financial, economic and environmental crises affecting the whole world, so you'll find very little hi-tech or futuristic kit. We wanted the game to feel real, and avoid going too "sci-fi." That said, we do feature a number of unmanned military hardware such as the Goliath drone!

TS: As far as the actual fighting is concerned, is there anything that will distinguish Homefront from other FPS titles?

HF: As I mentioned earlier, we wanted to give the player the experience of being part of a resistance unit - outmanned and outgunned by a superior military force. You constantly feel hunted and on the run as the enemy pursue you through the ruins of America suburbia. It encourages a more tactical play style as a run-and-gun approach seldom works against superior odds.

HF: In pre-production we experimented with dynamic destruction, but found that this actually detracted from the experience. We use what we call "environmental narrative" throughout our level design to tell the story of occupied USA, and allowing this environment to be destroyed takes away a lot of what we achieve with this.

In multiplayer, because of our focus on lots of vehicles with heavy firepower on the map at all times, destruction would remove a lot of the structures we placed there to support the infantry game and help balance that infantry versus vehicle mechanic. For example, in our map "Farm" there's a wooden church with a belfry that's perfect for sniping. If we allowed this to be destroyed early in the game, it would remove that tactical option from the map for the rest of the match. 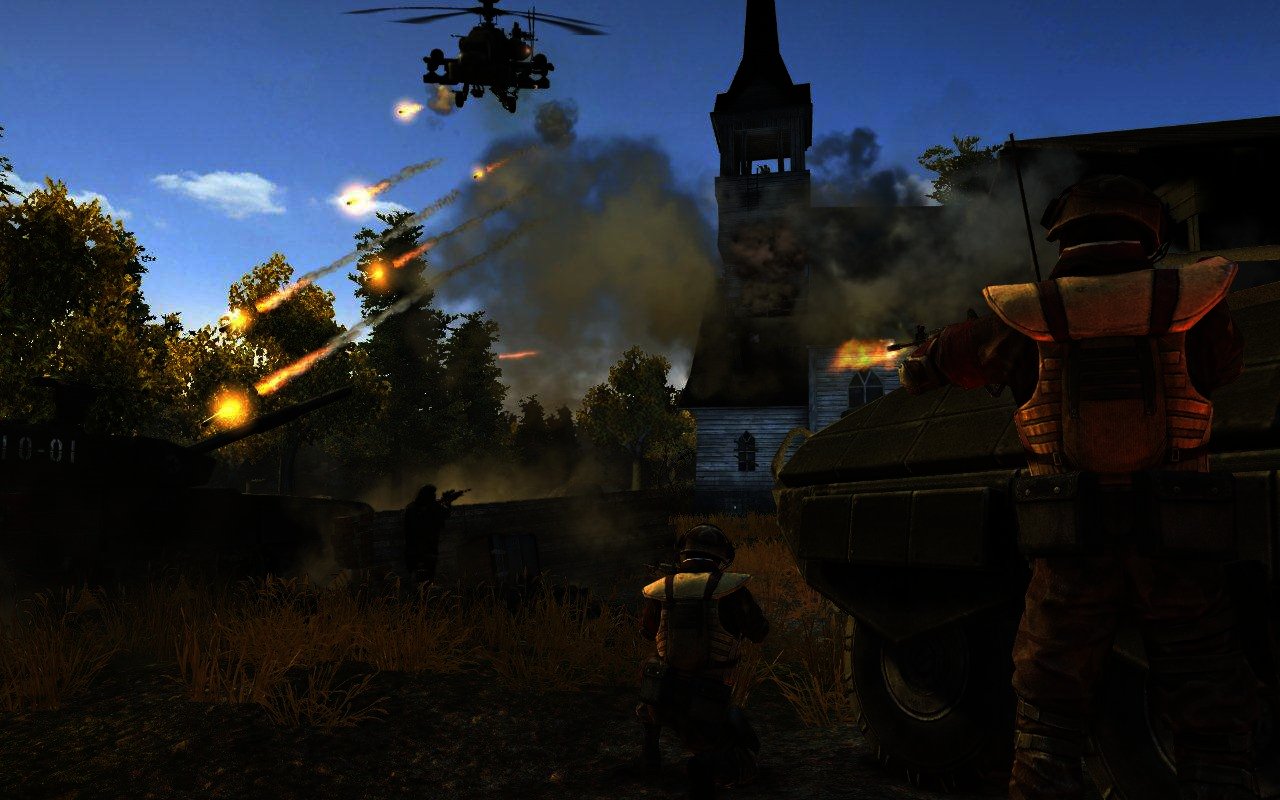 TS: Can you reveal anything around the game's multiplayer options yet? What gametypes will be available or what players can expect from the online component for example?

On top of these modes we've added a brand new innovative system called Battle Commander. With this system enable, each team is lead by a Battle Commander - this is an AI General, watching over the entire match and directing his forces to victory.

Players who complete Battle Commander missions will receive benefits such as increased speed, a flak jacket, a personal UAV sweep each time they rank up, making them even more effective on the field.

The opposing Battle Commander will identify enemies on a mission as priority threats, and assign a seek and destroy mission to a player on his own team. The higher the star-level of the enemy player's missions, the more team mates are assigned to take him down.

If you're assigned a Battle Commander mission, the ultimate goal is to reach the Five Star level - at which point the entire enemy team will be instructed to take you out!

The beauty of Battle Commander is that it makes large scale warfare personal. It rewards players for pursing vendettas - how many times in an FPS have you set yourself that personal challenge of taking out the one enemy who seems to be decimating you and your team? Battle Commander supports this basic revenge instinct with escalating rewards to create some amazing emergent scenarios in the match.

Battle Commander is a great mechanics for both highly skilled and more casual players - for those hardcore FPS players, getting that Five Star missions become a huge bragging right and earns you instant notoriety in the match. If you're assigned a seek and destroy mission, you have your own shot at glory to take out that Five Star opponent, and if successful you'll be rewarded with a huge stock of Battle Points allowing you to deploy drones or a killer vehicle and maybe earn a Battle Commander mission for yourself.

TS: Does the team play other developer's games such as COD, Mass Effect, and Medal of Honor? And do the elements featured in these games have impact or influence when developing a game such as Homefront?

HF: We love our FPS games at Kaos and we all play and enjoy the best of the competition! Having said that, we also look to other genres for inspiration - for example, one of our lead designers has a background in RTS games, and you can see this influence in some of our new innovations like Battle Points.

TS: Homefront is looking like it's going to be a huge success; can we expect a new FPS franchise?

HF: We've created a huge world to support Homefront, and although right now we're 100% focused on getting this first game out the door, there are plenty more stories to tell in the Homefront world. We feel we've barely scratched the surface to date!