Following on from Adobe’s release earlier this year of Photoshop CS6 and its associated software, the company has now released the latest iterations of its entry-level photo and video editing offerings, Photoshop Elements 11 and Premiere Elements 11.
Both however, are more focused on casual or home users, on Windows and Mac platforms, rather than professionals and more advanced users that their more expensive counterparts lay claim to.
To this end, while Photoshop Elements is intended to provide a “complete solution” for editing, organising and sharing photo creations, Premiere Elements is focused on easy creation of engaging home movies “with professional flair,” according to the company.
Something borrowed, something new
It may not carry the same price-tag as Photoshop CS6, but one thing Photoshop Elements 11 users can look forward to is a similarly revamped interface, using the same engine that has been employed to great effect affect in Adobe Photoshop.
Additionally, the company elaborated that the new release includes new Quick, Guided and Expert editing modes; one-click options; an Action bar; and large, bold icons.
Users will further be able to organise photos based on events, people or places (via Google Maps geo-tagging), while the new Guided Edits are intended to make professional grade effects, such as tilt-shift, vignettes and high and low-key, easier to apply to their images.
As befitting a software that is aimed at home users, Photoshop Elements 11 also seems to have a particular focus on enhancing creativity, and thus it brings new filters, namely Comic, Graphic Novel and Pen and Ink, to the mix.
Arguably one of the more challenging aspects of digital imaging for casual or novice users is extracting objects from different photos, and with this in mind, Adobe added that it had implemented “Intelligent Photoshop technology” to make the process easier.
Finally, the new release is apparently social media friendly, offering users the ability to share their photos from the software to social networks such as Facebook, as well as via email. 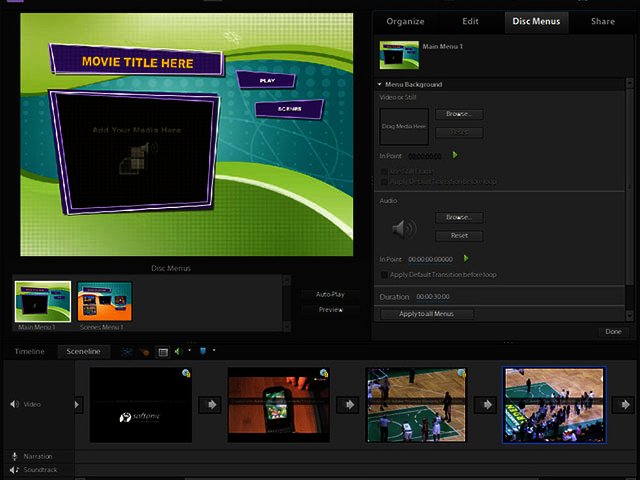 Adobe Premiere Elements 11 sports a newly revamped interface.
Ready for your premiere?
As anyone who has ever edited a movie can attest, the video editing process can entail a good deal of work and time.
Adobe therefore, has asserted that Premiere Elements 11 will enable users to create attractive, pro-level videos, while automated moviemaking options are aimed at take the work out of video editing. Along with the new user interface and features offered by its image-conscious brother, Premiere Elements will further add effects, transitions, themes, titles, disc menus and professional-level effects and sounds to its credits.
New features on offer include FilmLooks, which is intended to grace one’s video with Hollywood movie styles; slow and fast motion effects; the ability to ‘dial in’ colours using slider controls and make adjustments with quick presets, as well as integrate blends for seamless transitions between scenes. Finished videos can then be sent directly to Vimeo for sharing.
Is the price right?
While new features are wonderful, the Elements range primary selling point has long been their affordability. Happily, this tradition appears to be one that Adobe has no intention of changing. What’s more, Photoshop Elements 11 and Premiere Elements 11 can either be purchased separately, or in a bundle of its own.
At present, pricing for Photoshop Elements 11 and Premiere Elements 11 looks set to be $100 (R830) and $80 (R664) respectively from the Adobe online store, or $150 (R1245) for both programmes together. Local pricing for retail stores in South Africa, however, has not been announced.
To the point
“Photos and videos allow us to capture and share moments in time,” said Lea Hickman, vice president products, Creative Consumer Business, Adobe. “Powerful – yet friendly and easy to use – Photoshop Elements 11 and Premiere Elements 11 inspire creativity and help consumers make the most of remembering and sharing these personal memories.”

Admittedly, we have over the years become increasingly impressed with Photoshop in particular, with the latest version, CS6, recently landing in our offices for review.

However, as stellar as the CS6 suites are appearing to be, some users simply don’t need all that power to do more with their photos and videos. It is this group that the new additions may squarely target, and for whom Hickman’s assertion may be most apropos.