Think before you scan – QR codes are a potential...
0
comments

Powerful but short-lived: One third of phishing pa...
0
comments

According to market research firm Gartner, smartphone sales to end users reached 115 million units in Q3 of 2011, a rise of 42% compared to the same period in 2010. However, smartphone sales slowed to 7% growth between Q2 and Q3 of this year. These devices accounted for 26% of all mobile phone sales, growing only marginally (1%) from 25% in the previous quarter.

"Strong smartphone growth in China and Russia helped increase overall volumes in the quarter, but demand for smartphones stalled in advanced markets such as Western Europe and the US as many users waited for new flagship devices featuring new versions of the key operating systems," explained Roberta Cozza, principal research analyst at Gartner. "Slowdowns also occurred in Latin America and the Middle East and Africa."

"Some consumers held off upgrading in the third quarter because they were waiting for promotions on other new high-end models that were launched in the run-up to the fourth quarter holiday season," Cozza added. "Other consumers were waiting for a rumored new iPhone and associated price cuts on older iPhone models; this affected US sales particularly."

Samsung atop of the smartphone sales throne

According to Gartner, Samsung claimed that no. 1 spot as top smartphone manufacturer worldwide, as sales to end-users tripled year-over-year to reach 24 million. Gartner attributes the Korean tech giant’s sales success to the strong performance of Samsung's Galaxy smartphones, which now cover a broad range of prices, as well as a result of a weaker competitive market. Analysts expects tougher market competition in the final quarter of 2011, because sales of the iPhone 4S, 4 and 3GS is expected to capture share from Android manufacturers.

Apple shipped over 17 million iPhones, an annual rise of 21%, but down nearly three million units from Q2 of 2011, because of Apple's new device announcement in October. Gartner stated that Apple will bounce back in Q4 because of its strongest ever pre-orders for the iPhone 4S in the first weekend after its announcement.

Developing markets the likes of Brazil, Mexico, Russia and China are becoming more crucial for the Cupertino-based tech company, as these represent 16% of overall sales and show that the iPhone has a place in emerging markets, especially now that both the 3GS and 4 have received price cuts.

A look at Espoo & Android

Despite a drop in market share, Nokia continued to be the worldwide leader in mobile phone sales as it accounted for 23.9% of global sales. Q2 of 2011 was the low point for Nokia, but Q3 brought signs of improvement. Dual-SIM phones in particular, as well as feature mobile phones in general, maintained Nokia’s momentum in emerging markets.

Gartner said that heavy marketing from both Nokia and Microsoft to push the new Lumia devices should bring more improvement during Q4 of 2011. However, the research firm said that a true turnaround won't be taking place until the second half of next year.

Google’s Android mobile operating system (OS) accounted for 52.5% of smartphone sales to end users in Q3 of 2011, more than doubling its market share from Q3 of 2010. Android was followed by Symbian which captured 16.9% of the smartphone OS market share, with Apple’s iOS coming in a close third with 15%.

"Android benefited from more mass-market offerings, a weaker competitive environment and the lack of exciting new products on alternative operating systems such as Windows Phone 7 and RIM," Cozza stated. "Continued pressure is impacting RIM's performance, and its smartphone share reached its lowest point so far in the US market, where it dropped to 10%." 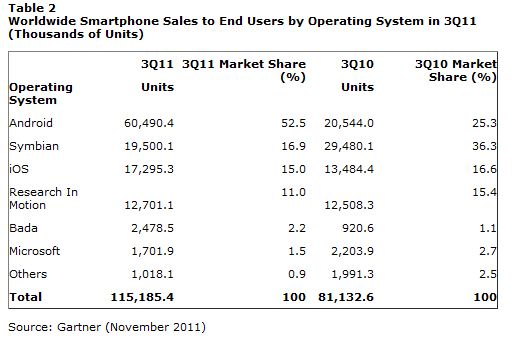 When it comes to the worldwide sales of mobile devices Gartner said that it totaled 440.5 million units during Q3 of 2011, up 5.6% from the same period last year. The company stated that non-smartphone devices performed better in terms of sales, driven by demand in emerging markets for low-cost devices, as well as for dual-subscriber identity module (SIM) devices.
"Our forecast for the end of the year remains broadly in line at a worldwide level as regions such as Asia/Pacific and the Middle East and Africa make up for weaker performance in the Western European market," said Annette Zimmermann, principal analyst at Gartner based in Munich. 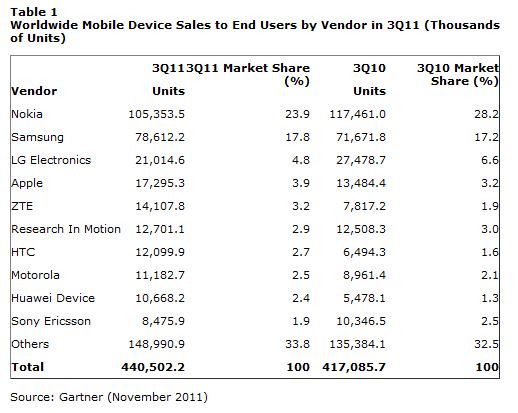