Following on from Razer’s recent announcement of its new Blade notebook for gamers, MSI has launched its own new top-of-the-line GT683DX gaming notebook. The GT683DX boasts some impressive specifications. These include an Intel second generation Core i7-2630QM quad-core processor, nVidia's GeForce GTX 570M discrete graphics card with 1.5 GB of  memory, and four DDR3 memory slots that provide 16 GB of memory.

Surprisingly though, rather than the anticipated 17” display however, it instead has a 15.6" Full HD (1920x1080) screen. Even so, the notebook still weighs in at 3.5 kg. However, the notebook does have an HDMI port, for outputting games and video on a large-screen LCD television screen. The company also noted that the notebook received a record 12 475 points when it was tested in the performance mode on 3DMark Vantage, an impressive score indeed.

Eric Kuo, associate vice president for global sales, MSI Notebook, added that the GT683DX gaming notebook comes with high-end Dynaudio and THX TruStudio Pro sound. “Dynaudio, which is a world-class name in sound design based in Denmark, incorporated its own sound enhancement technology into the GT683DX to reproduce stereo sound as clean and crisp as the original. The THX TruStudio Pro technology further ensures a truly impressive sound experience,” he elaborated. 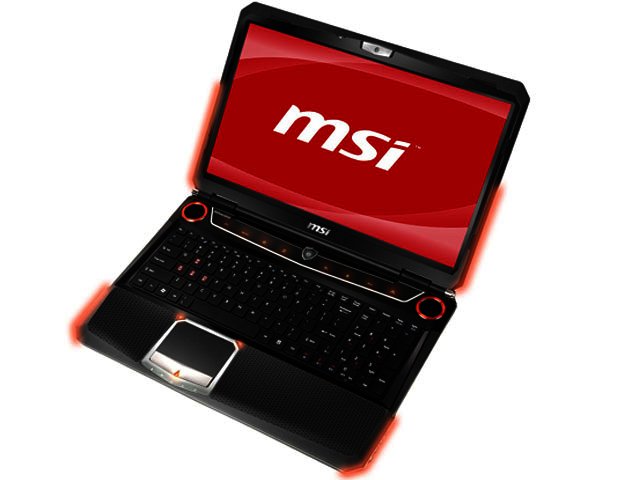 In recognition of the fact that gaming notebooks will likely see both literal and figuratively heated game sessions, the notebook further features MSI Cooler Boost, which enables users to press a hotkey on the keyboard to engage the notebook’s cooling capabilities. In a similar vein, a hotkey is dedicated to engage the GT683DX’s overclocking Turbo Drive Engine technology. Additionally, a chiclet keyboard, two USB 3.0 and two USB 2.0 ports, 802.11 b/g/n WLAN and a 750 GB SATA hard drive + Intel 120 GB solid state drive (SSD) make their appearance on the notebook.

Finally, the notebook has the company’s own ECO Engine, a power-saving technology which allows users to select from among five power management level, including Video Game, Film, Presentation, Word Processing, and Turbo Battery, which automatically adjusts display brightness as well as on/off switch, sleep mode, and processor performance settings, in order to maximise battery flexibility and use per charge.

There is no word yet as to the price and local availability, but judging by the number of newly announced gaming notebooks of late, not to mention those already in the market, the gaming notebook segment is going strong, with the likes of Asus, Razer, Alienware and MSI battling it out for their share of the PC gamer’s devotion.