The Mozilla Mobile team today offered a sneak peak into what tablet users can expect from its forthcoming iteration of the mobileFirefox browser, which is currently being customised for use on Android Honeycomb tablets. Ian Barlow, a visual designer for Firefox Mobile's User Experience team, explained on his blog that ‘Firefox for tablets is an evolution of its phone based predecessor, with some added enhancements that take advantage of a tablet’s larger screen size.’ He elaborated that, while the browser draws its overall theme from Honeycomb’s minimalist design, the development team has ensured that the browser has retained familiar visual elements, such as its signature large back button.

He added that users of the current phone version of Firefox will notice that the tabs have been moved off to the left, explaining that this makes them easier to reach and increases the number of results that can be displayed above the keyboard.“On Firefox for phones, we meticulously tucked away all of our user interface elements to free up the screen for unrestricted browsing. On a tablet, the bigger screen let us bring some of those helpful elements back onto the screen, like tabs, for example,” he elaborated. In landscape mode, tabs will exist in a persistent left bar, allowing for quicker browsing. Users will be able to switch through tabs with their left thumb, and scroll through web content with their right. In portrait mode, this tab bar gets rolled up into a menu item at the top of the screen, to free up browsing space below. 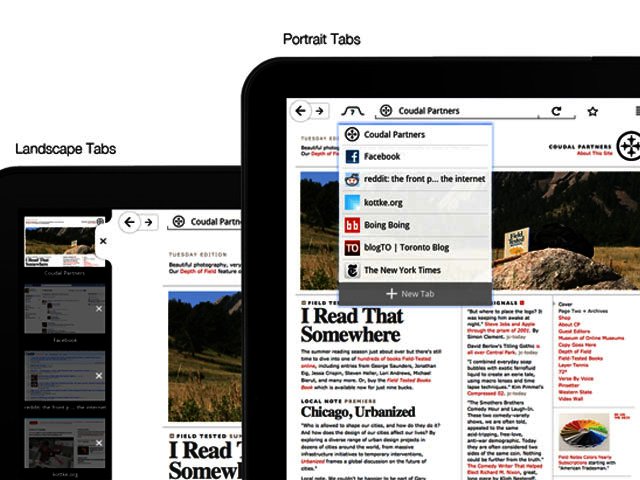 Firefox tabs treatment in both portrait and landscape view on a tablet
According to Barlow, this will cater to both kinds of users, who prefer to keep lots of tabs open and quickly switching back and forth between them (our browsing habit of choice),as well as those who prefer to open a page and see nothing else on their screen. Additionally, the browser will feature an ‘Awesomebar’ which uses the same tabbed menu to allow quick access to bookmarks, history, and synchronised desktop activity.

There’s no word as yet when we can expect the new release of the mobile browser, but more apps specifically built for the Honeycomb platform can’t come fast enough for our liking, and we will definitely be checking out these changes when they do become available in the Android market.