Mozilla’s Firefox browser’s share increased a little from January’s 20.88% to 20.92.% during February, as the fox continues to outpace Google’s Chrome in the race for second place. Like IE, Chrome also saw its share of the browser pie decrease slightly from 18.94% during January to 18.90% for February.

Apple’s Safari browser is climbing a few browser stake stairs, increasing its share from 4.9% in January to 5.24% in February.

Things were generally good for the fringe browsers as Opera Software’s Opera browser also gained some users to see its stake climb from 1.67% in January to 1.71% during February.

According to a blogpost on Microsoft’s official The Windows Blog by Roger Capriotti, director of Internet Explorer product marketing, IE9’s user adoption rate on Windows 7-operating PCs continues to increase.

The latest version of the company’s desktop browser has surpassed the 30% mark around the globe as of the end of last month. Firefox 10 comes in second with 21.9% share, whilst Chrome 17 completes the top 3 with its 18.9% user stake. In the US more than 40% of PC owners, whose computers are running Windows 7, utilise IE9 as their browser, with 16.8% using Firefox 10 and 12.5% employing Chrome 17. 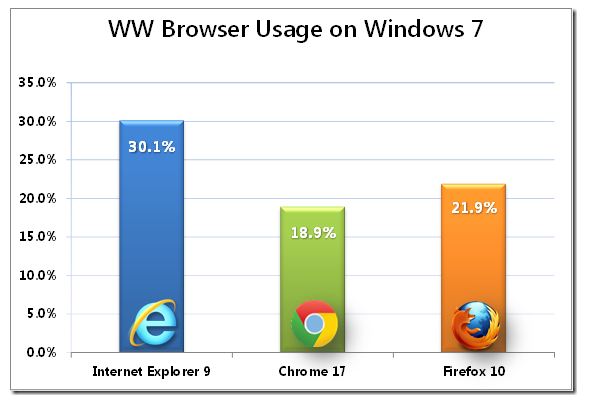