Recent reports may have China looking poised to overtake the US as the number one smartphone market, but that doesn’t mean that the US’ smartphone adoption rate is showing any signs of winding down as yet.

According to the latest research market research firm Nielsen, over half (55.5%) of mobile subscribers Stateside now own a smartphone instead of a feature phone.

The analytics company looked at the mobile market in the US and found that smartphone penetration continued to increase during July 2012. A rate of 55.5% is a significant growth  compared to the same period last year, when only 41% of mobile subscribers owned smartphones.

Overall, young adults are leading the smartphone ownership charge Stateside, as Nielsen’s research revealed that 74% of 25-34 year olds now own these types of mobile devices. This is up from 59% during July 2011.

Nielsen stated that teenagers (13-17 year olds) have shown the most dramatic increase in smartphone adoption, with the majority of American teens (58%) now owning a smartphone. This is up from around a third (36%) of teens saying they own a smartphone just a year ago.

Android the smartphone platform of choice in the US

Android-powered handsets are leading the smartphone market charge in the US. Nielsen’s research shows that both a majority (51.9%) of smartphone owners, as well as recent acquirers (those who obtained their device in the last three months; 58.6%), now utilise a device that operates on Google’s Android mobile operating system (OS).

Apple’s iPhone takes second place with a share of 34.3% of smartphone owners and 33% of recent acquirers opting for an iOS-running handset. RIM’s (Research In Motion’s) BlackBerry smartphones are proving to be far less popular in the States, with a decreased US smartphone market share of 8%, whilst less than 3% of recent smartphone acquirers chose a BlackBerry handset as their new smartphone. 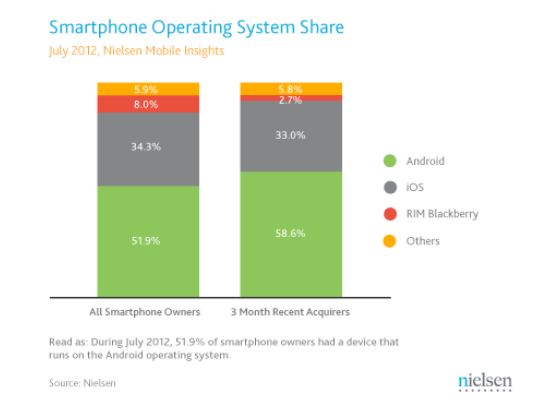 “Among most age groups smartphones represent the majority of US mobile subscribers, but American teens were the age group adopting smartphones the fastest,” Nichole Henderson, a Nielsen analyst said. “As teens increase in their share of smartphone owners, mobile carriers and manufacturers should consider how to market to this growing group.”

In related news, market research firm comScore recently released the latest data from its MobiLens service, looking at key trends within the US mobile phone industry over the three month period ending July 2012.