Market research firm Nielsen has revealed its latest research analysing the US mobile phone market. Just like the analytics firm comScore, Nielsen found that Google’s Android mobile operating system is dominating the American smartphone landscape in terms of mobile platforms, while US buyers are becoming more biased towards smartphones as opposed to opting for feature phones.

Nielsen’s research shows that by March 2012, just over half (50.4%) of US mobile subscribers owned a smartphone, which is an increase of 2.6% compared to the 47.8% recorded during December last year. Consumers in the States are also buying new smartphones more often than feature phones.

Android army conscripts more users in the US

When it comes to smartphone owners Stateside, Apple was the top manufacturer of handsets, which is surprising since Samsung managed to dethrone Apple as the world’s leading smartphone vendor during Q1 2012.

Android was the top mobile OS, and according to Nielsen, 48.5% of US smartphone users employ a devices that operates on Android. This is a little less than comScore’s MobiLens service, which showed that Google’s Android mobile OS accounted for more than half (51%) of US smartphone subscribers by the end of March 2012.

Apple’s iOS took second place, powering 32% of smartphones (30.7% - comScore), whilst RIM’s (Research In Motion) BlackBerry OS platform completed the top three. The Canadian smartphone and tablet maker’s OS is being used on 11.6% of US smartphones.

The next two places in the smartphone platform rankings are taken up by Microsoft, whose outdated Windows Mobile platform comes in fourth by snapping up a 4.1% share, whilst the new Windows Phone OS mobile platform lands on fifth with its 1.7% stake. 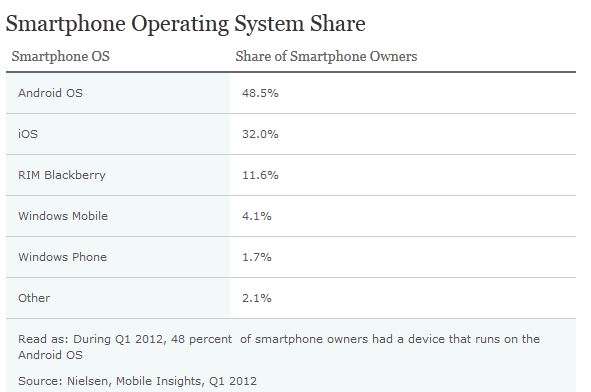