Website monitoring firm, Pingdom, has released a new report detailing the global web browser share by browser version. The company looked at desktop browser usage in each world region, as well as the overall global usage, by employing web usage data from StatCounter. This data is based upon user visits to more than three million websites over the first three weeks of April.

Like Net Applications, Pingdom found that Microsoft’s Internet Explorer (IE) leads the browser charge, but by a much smaller margin. The company stated that IE is no longer king of the desktop browser jungle within Europe, Asia, Africa or South America, but remains top dog in the US and Oceania which consists primarily of Australia. The top three browsers of choice in all regions of the globe are IE, Google’s Chrome and Mozilla’s Firefox.

Microsoft’s IE (all versions) snaps up 34% of the browser usage pie, with all versions of Chrome’s share amounting to 31.2% and all versions of Firefox claiming 25%. These podium finishers are followed by the fringe browsers in Apple’s Safari with 7.1%, Opera Software’s Opera browser claiming 1.7% and other miscellaneous browsers being responsible for the remaining 1%. 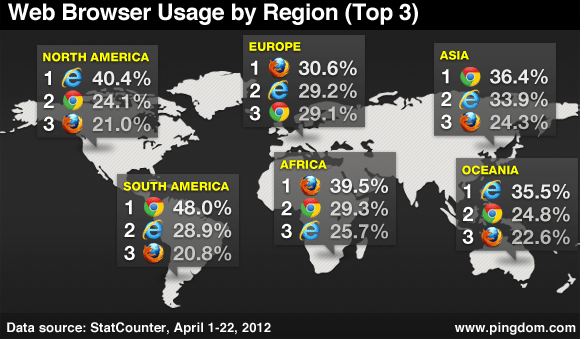 Mozilla’s Firefox has clearly struck a cord with African internet users, with 39.5% of web surfers utilising a version of Firefox, whilst 29.3% prefer Chrome and 25.7% use IE. The most used browser version on the African continent is Chrome 18, which snaps up 21.5% of the browser usage pie. The latest version of Chrome is followed by the newest version (11) of Firefox with 18.1% usage and IE8 at 12.3% (3.2% more than fourth placed IE9).

Microsoft may have celebrated the official end of the road for its long-running IE6 browser in the US at the beginning of the year, but this version is alive and kicking in Africa and Asia. In Africa it is used by 2% of web browsers (holds last place in the top 10). Additionally, the old version of IE makes it to number 7 on Asia’s top 10 most used browsers, by claiming a 2.7% stake in the browser pie. 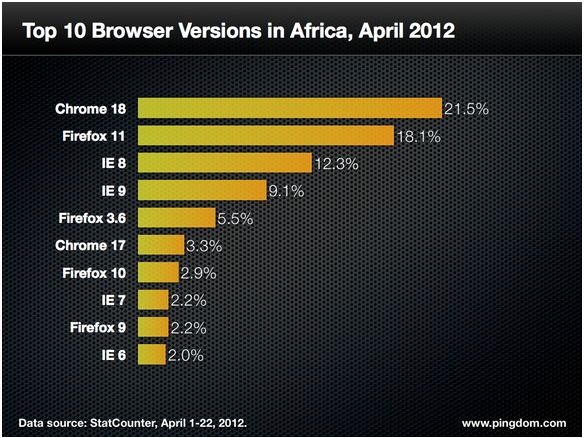