After lifting the veil off of its Android Ice Cream Sandwich (ICS) running Galaxy S3 smartphone, Samsung Electronics now turns its attention to its Windows Phone OS-powered Omnia range, by announcing the launch of the Samsung Omnia M GT-S7530.

This Windows Phone Mango-based smartphone measures in at 64.1 x 121.6 x 10.5 mm and weighs 119 g. The Omnia M features a larger 4" (480 x 800; 233 ppi pixel density) Super AMOLED touchscreen, compared to the its Omnia W’s 3.7" display. The company stated that this screen sports reduced glare, enabling enhanced clarity even when it is used outdoors in direct sunlight.

Competing in the midrange smartphone market

Based on its specs, Samsung’s Omnia M seems to be targeting competing devices such as Nokia’s Lumia 710 as opposed to more premium offerings like the Lumia 800 and the HTC Titan II. Like the Omnia 7, it is powered by 1 GHz single-core processor (make unspecified) compared to the 1.4 GHz Qualcomm MSM8255 Snapdragon of the Omnia W and most Lumia devices.

Also onboard is a 5 MP autofocus camera with LED flash that is only capable of recording VGA (640 x 480; 30 fps) videos as opposed to the new midrange standard of HD-Ready (720p) videos. The phone boasts 384 MB RAM, Wi-Fi 802.11 n, Bluetooth v2.1 with A2DP, a large 1500 mAH battery, and 3G HSDPA connectivity offering download speeds of up to 7.2 Mbps and upload speeds up to 5.76 Mbps. GPS with a-GPS support is also offered, but unfortunately only offering Bing maps instead of our mapping software of choice, Google Maps.

Onboard is a rather limiting 4 GB (the Omnia W has 8 GB) of internal storage that cannot be expanded upon since there’s no microSD card slot, but users do have access to 25 GB of free online storage for their high-res photos, videos, and Office documents, courtesy of Microsoft’s Windows Live SkyDrive service. 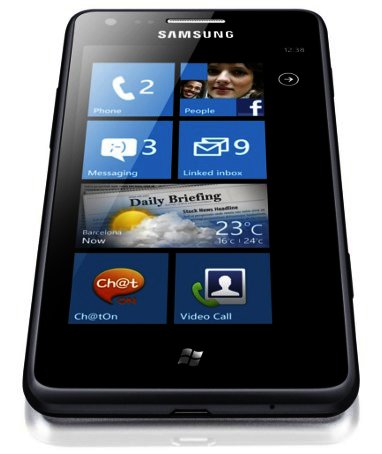 Just like Nokia, Samsung is looking to differentiate its Windows Phone OS mobile devices by way of apps. Music fans will appreciate the fact that the Music Hub offers a Smart DJ feature, enabling users to automatically generate playlists based upon the mood that they are in.

Another couple of app inclusions that struck our fancy are Samsung’s Photo Studio, which allows users to edit their photos, and the ChatOn instant messaging (IM) service. This IM platform enables users to chat and share multimedia content with family, friends and colleagues, who are using mobile devices powered by iOS, bada, Android or Windows Phone OS.

Samsung stated that its Omnia M will be available in Europe first and will then be rolled out to other regions. No local release info is available yet.