With more and more dashcams making their way to the local market, Garmin’s Dash Cam 35 offers something unique – the ability to record your exact GPS position while driving. All footage recorded includes a time-stamp, speed travelled and GPS location (longitude and latitude) at the bottom, providing what could be valuable information in case of an incident or accident.

There’s a couple of features that adds to the Dash Cam 35’s usability. For one it’s small enough to practically mount anywhere without interfering with your line of sight. My recommendation would be to mount it in such a position that it could be turned towards to driver’s window in case you need to record footage while dealing with police or traffic cops. Be warned – once in place it’s very difficult to remove the adhesive mount so you need to be very sure before sticking it in place. Garmin does provide an extra double sided adhesive strip in case you sticked it in the wrong position, or want to use the mount in a different car. 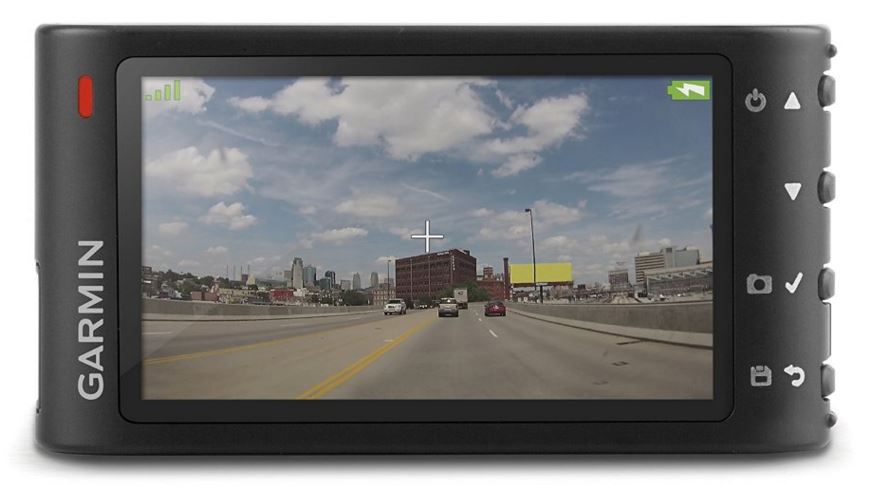 Record on the road

Like most dashcams you don’t need to turn on the Dash Cam 35 to initiate recording, since it does so automatically when you start the car (well, a few seconds afterwards since it first cycles through unnecessary on-screen warnings). Unlike others, the Dash Cam 35 also offers a bit of internal power, so in case your car switches off it can still record up to one minute of footage.

When you are in an accident, or even when braking hard, the Dash Cam 35’s G-Sensor will trigger the automatic saving of the previous, current, and following recordings, so that other footage cannot be recorded over it.

One of the buttons next to the side of the Dash Cam also allows you to save footage just recorded with a simple click (if there was, for example an accident that took place in front of the road), but the button is slightly difficult to find without taking your eyes off the road, and I would have preferred if it was a different colour and size to the other three just above it. 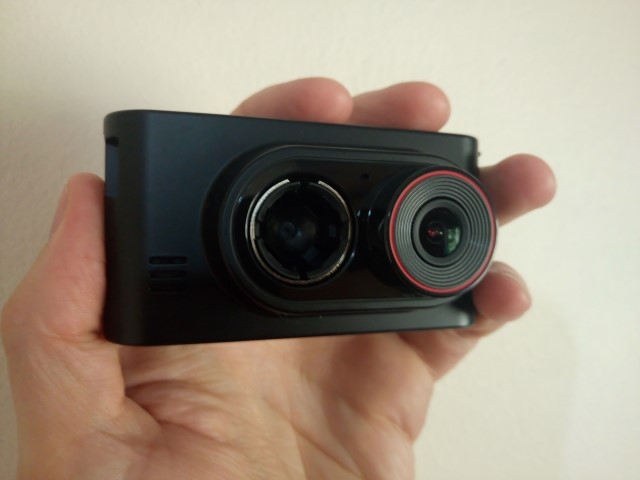 An added extra on the Dash Cam 35 is safety camera warning alerts, in the form of beeps. Personally I’m in two minds about this, since when driving from Johannesburg to Pretoria on the highway it will beep quite a number of times, warning against potential speed camera positions whether there are actually cameras there or not. It is a feature that could come in handy when going on vacation, but the beeping got the better of me in the city and I turned it off. Also on offer is forward collision warning alerts, which beeps if you are too close to the car in front of you. During the test period I luckily didn’t needed to be alerted this way.

With previous dashcams tested, I was used to simply connecting it to a dual charger with 2.1A output in the cigarette lighter. This means I have an extra USB slot to also charge a smartphone at the same time. The Dash Cam 35 does not work this way and comes with its own charger that takes up the whole cigarette lighter, so if you also want to charge your phone you’re simply out of luck.

While a 3" LCD screen is on offer, I rarely used it for playback, preferring to simply connect the Dash Cam to my PC to see the MP4 files. Garmin does offer its own Dash Cam Player for download to view and organise recorded footage, although I simply used VLC media player for footage. This can be recorded in either full HD (1080p) or 720p resolution, with the 1080p recording quality preferable in my opinion. The dashcam records one minute of footage at a time, looping over old files as soon as your microSD card is full. Speaking of which, Garmin provides a 4 GB card in the box, although we would recommend something preferably in the 16 GB range (Class 4 required) in case you want to review something that happened along the way that did not trigger automatic saving.

Garmin’s Dash Cam 35 is compact and stylish enough not to be a bother (except for the unsightly cable that powers it), doing the job required while also using GPS positioning to provide extra information at the bottom of its 1080p videos. While the speed camera warnings became a bit too much for me, others could find this a good way to stay fine free. Ultimately, the Garmin Dash Cam 35 did the job without fuss and retails for R3 000. If you do not require the GPS positioning, the Garmin Dash Cam 30 at R300 cheaper should suffice.