We recently had the opportunity to test the new Garmin nüvi 1410 GPS (Global Positioning System) which can also receive live traffic updates.We headed down the N1 for a test drive to see if it can cope with the traffic along the way. Here is what we found.

Design
The nüvi 1410 sports an attractive glossy black design which stays in tune with today's minimalistic design philosophies. You'll only find one power button and one port for connecting the car charger on the device - no other buttons are included.
A 5” touch-screen display sees service on the device, giving users a clear, big picture of the road ahead. While the display is comfortably wide, crisp and supports a range of colours, we weren't too impressed with the touch-screen functionality, frequently having to repeatedly press icons on the screen to have something happen. This can become especially annoying when you're in a hurry.
The in-car mounting bracket functions roughly the same way as all GPS mounting brackets do, by attaching the device to the windscreen or dashboard via a suction cup mounting. These mountings have also gained a notorious reputation for crashing down on unsuspecting drivers at the worst times and unfortunately the nüvi 1410's bracket is guilty of the same flaw, losing its grip on the windshield a number of times. 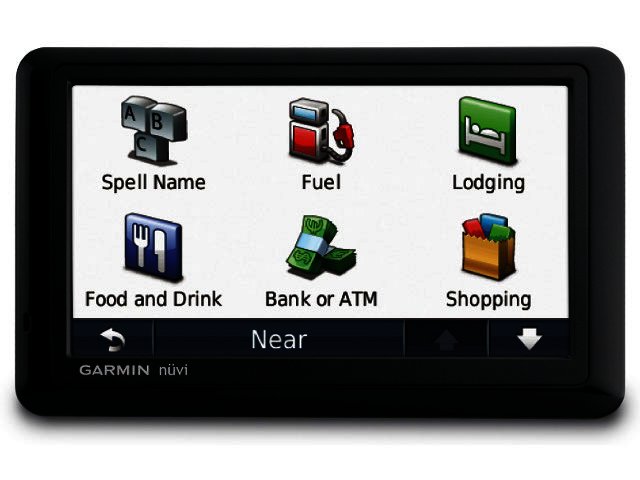 Features
The nüvi 1410's basic functionalities works the same way as most modern GPS devices and also include a multi-point routing feature which can be used to plot the fastest route between multiple stops. Preloaded on the device users will also find the ecoRoute function, a feature that can calculate the most efficient routes as well as showing a real-time 'eco rating' for your driving habits by analysing petrol usage, braking and so forth.
The very useful 'where am I' feature is also present on the 1410, giving you your exact coordinates, elevation, nearest address, nearest junction and even information on the nearest hospitals, police stations and filling stations.
Something we found quite useful on the 1410 was its trip log function, this electronic trail of bread crumbs tracks your movements so you can see where you've been on the map previously with a thin blue line displayed on roads you've travelled before.
The nüvi 1410 comes preloaded with Garmap Southern Africa Streetmaps, meaning the entire country is covered. 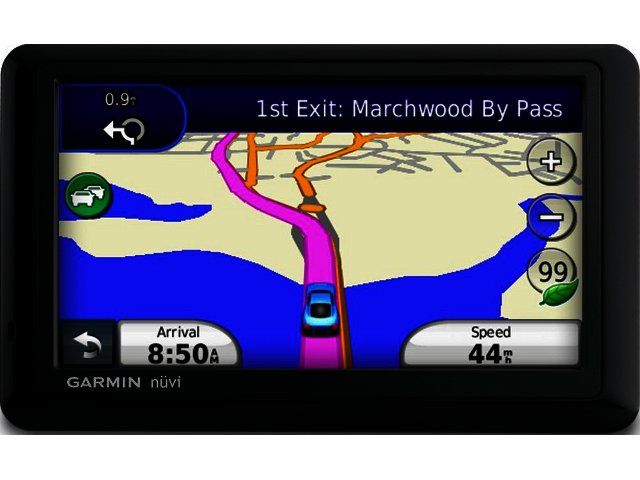 GTM 25 traffic receiver
A Garmin GTM 25 traffic receiver accompanied our nüvi 1410 test model, enabling the GPS to pick up live traffic updates as you drive.
It's basically a FM receiver built into the power cord of the GPS. A 3.5 mm jack on the power connector allows users to connect the device and a built-in antenna in the cord, as well as an optional extra antenna that can be stuck to the windscreen allows signals to be received.
The FM-RDS TMC receiver gathers live traffic information broadcast over FM radio waves, sending it directly to your Garmin device. A green button on the left-hand side of the display can then be pressed to bring up different traffic options. Users can view a traffic version of the map (where heavily congested roads appear in red), search for traffic incidents in the surrounding area and check for incidents on your currently selected routes. Traffic data shown includes road works, traffic accidents, heavy traffic, moderate traffic and hazards.
Users also have the option of avoiding incidents when the traffic receiver finds them, this can be a hit and miss experience though. If the traffic is moving slowly the device may not see a reason to switch routes, and no alternatives might be available.
While testing the device we received mixed results, in one instance driving on the N1 towards Johannesburg we used the receiver to check for incidents and it correctly indicated an accident and slow moving traffic a couple of kilometres ahead. On our way back to Pretoria we used the functionality again, but this time it told us that there were no traffic on the route even though we were stuck in bumper to bumper congestion for some time.
There are some gripes, but in general the GTM 25 traffic receiver was a handy addition to the Garmin package.
Other GPS devices such as the Navigon 40 Premium also sports live traffic updates, but in the case of the Navigon users can access the function via a built-in RDS-TMC receiver, instead of having to purchase the optional traffic receiver as is the case with the nüvi 1410. 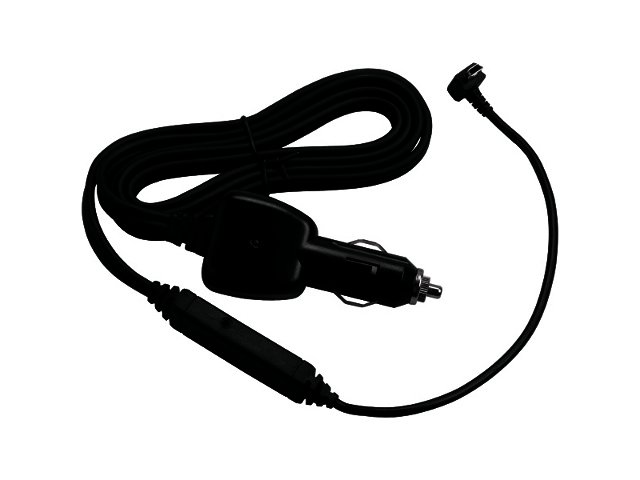 Bluetooth
The device is also equipped with Bluetooth technology, enabling users to pair their phone to the GPS and make and receive calls through the unit's built-in microphone and speaker. The hands-free calling was easy-to-use and sports adequate audio quality.
Conclusion
The Garmin nüvi 1410 provides users with an easy-to-use and feature rich GPS solution. It executed all of its route guiding functions perfectly, while the optional GTM 25 traffic receiver turns it into an even more complete package. We just feel Garmin can do a bit more regarding the strength of their mounting brackets' suction cups.

PROS
A rich feature list including with triplog and ecoRoute functions adds some nice bells and whistles to the device.