A distinctive game with plenty of heart
8.5    Gameplay
8.2    Story
7.5    Presentation
7.5    Lasting appeal
3.5
While the aging Wii may be in its final days ahead of its successor, there are certain titles that comprise a fitting swan song for the console. Amongst these is the distinctive Pandora’s Tower, which proves to be well worth playing.
The game wastes little time jumping into a rather macabre story about a young girl, Elena, who has been cursed to slowly transform into a beast after being attacked at the harvest feast.
The player steps into the shoes of her love and hero, Aeron, who has to traverse thirteen different towers and slay the monsters within, as the only way to hold the curse at bay is for Elena to eat their flesh.
The overarching aim is in slaying enough of the monsters, in the hopes that this will eventually lift the curse and free Elena for good. 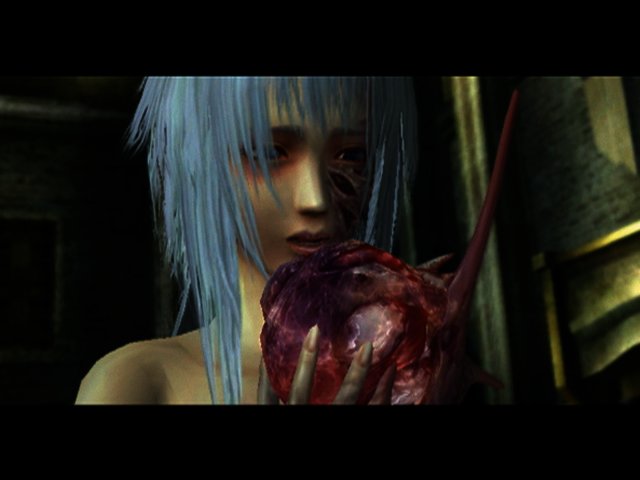 "Tell you what, when I get home, we'll have a nice, hearty meal."
Gives new meaning to the term ‘bringing home the bacon’
If you thought that premise was creepy, bear in mind that Elena is a vegetarian, and thus her disgust at eating the beasts’ flesh (heart) is conveyed in detail, reminiscent of those scenes in Fear Factor, in which contestants’ constitutions are tested by all sorts of disgusting dishes.
However, it’s not quite as simple as taking a leisurely stroll through one dungeon after another, in the gothic interpretation of a trip through Woolies; there is also a time factor involved, as players need not only to keep watch on Aeron’s health gauge, but on Elena’s humanity gauge as well.
The latter slowly empties, showing the progress of Elena’s transformation, and how long you have to return to her before she transforms. Should it take too long to get back to Elena, she may be too far gone to save, and have fully reverted to monstrous form. Let’s just say if this happens, you won’t like what, or more accurately who, ends up on the menu upon your return.
The humanity gauge serves two purposes: firstly it gives the game a sense of urgency, a sense that time is of the essence in your quest while encouraging you to invest in not just Aeron’s wellbeing but Elena’s as well. Additionally, it serves to keep the game’s subtext - Aeron and Elena’s love for each other - clearly in focus while traversing the towers and defeating their guardians.
In essence, Pandora’s Tower is a love story, as Aeron’s poignant and apparent devotion to Elena forms the core of the game.
Players can chose just how fully they want to express that devotion, which then has impact on one of twelve possible endings. For example, players can choose to spend the currency they find throughout the game world on upgrading their weapons or on new items, but they are also given the option to buy Elena gifts and talk to her in between confronting the next tower.
Of course, these can be overlooked and one can simply jump from one dungeon to the next; however, that choice too will have impact.
It must also be pointed out that the underlying love story is not overly soppy or saccharine sweet; but rather tender and dare we say, at times even poetic in its execution. Rest assured though, there is plenty of action and adventure to be found. 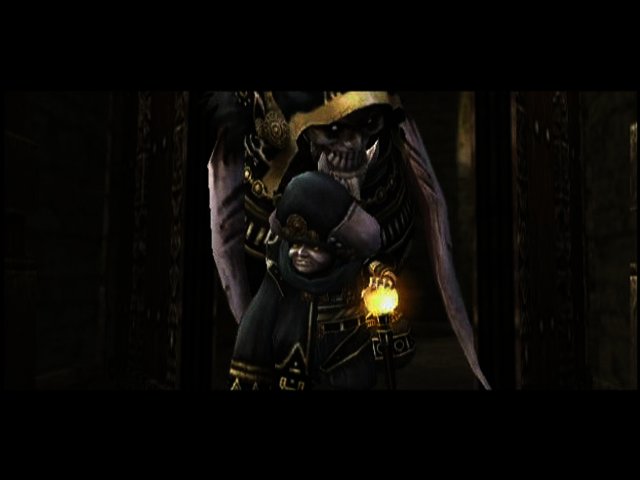 "I've got an excellent dermatologist - he can get rid of practically anything."
Caught in its grip
The two are accompanied by the rather mysterious, somewhat sinister mentor who seems to have secrets of her own, not to mention a creepy companion who gives new meaning to the term ‘riding on one’s coattails’.
The graphics are par for the course, not brilliant but not terrible either, while the voice acting and dramatic soundtrack is actually quite good. Moreover, the game’s combat is innovative in its own right; Aeron has the standard sword for melee attacks, with which he can perform slashing and charged attacks, as well as the ability to block incoming assaults.
Also on his side is the Oraclos Chain, with which he can tear flesh off the monsters he defeats, rip items out of other adversaries, as well as manipulate levers and access distant portions of the environment. Add in the ability to upgrade his weapons using said items and the ability to immobilise foes using the chain, and the combat becomes satisfyingly complex and rewarding enough to hold one’s interest.
However, the control scheme takes a little getting used to at first. The Wii Remote is not used in the same way as it was in Legend of Zelda: Skyward Sword, as attacks are performed by either pressing or holding the A button to strike. Instead, ‘wiimote waggling’ comes in once players lock onto a beast or enemy and want to rip flesh from it, by quickly pulling the Wiimote upwards, as if wielding a whip. 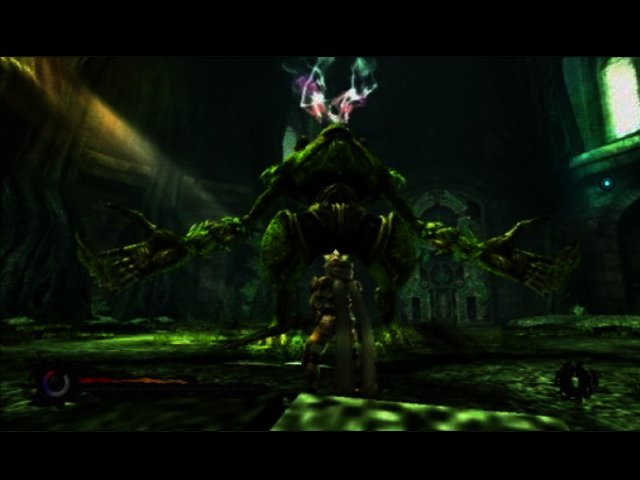 "I know you said you wanted to have a green thumb, but isn't this taking it a bit far?"
Nice to ‘meat’ you
The culmination of each tower is of course, its unique boss. For the most part, these are quite daunting creatures; unfortunately, the strategies used to slay these monstrous beasts can be a bit repetitive.
While the game made us fondly reminiscence at times about the Legend of Zelda series, we can’t say the boss encounters quite lifted to those lofty, memorable and thrilling heights. Despite this, the towers were still atmospheric enough to heighten the tension leading up to the climatic battles.
This became particularly engaging as we found ourselves racing to solve each tower, defeat its denizens, grab as much loot as we could and reach the tower boss, all  while keeping an ever-present eye on the clock in order to be able to return to Elena in time.
To the point
Pandora’s Tower’  is certainly a memorable game, not only for its macabre premise, but also for the deeper story that unfolds as one plays further.
The game’s greatest strength is that, in its own right, it is a love story compellingly told, which marries engaging combat with a poignant narrative, and proved that there are still some gaming gems on the aging system.

That is something we do not see every day, and why we can easily recommend those looking to squeeze some life out of their Wii give this game a chance to win their heart.