Tetris is one of the oldest and most recognisable titles in gaming history, rivalling Mario himself in its fame. The game was created back in 1984 at the Soviet Academy of Science by Alexey Pajitnov, and has since spread across the entire world like a puzzle epidemic.

If you're reading this right now, you've probably played Tetris before. Versions of the game are available on virtually all platforms today, from PC's to consoles to handhelds to cellphones to tablets to... well, you get the idea.

So how would a modern game studio go about successfully reviving the old series? The answer comes in the form of Tetris Party Deluxe for the Nintendo Wii.

While the game is unarguably Tetris at its core, it adds a slew of new features on top of the original experience. With vibrant colours and lively music, the title feels much more alive than the originals monotonous Tetris tones. Players also have the ability to change the song and background image in the game, adding a drop of customisation to the options list.

While the graphics aren't going to be competing in a high quality visual display contest any time soon, the Wii's capabilities adds an aesthetically pleasing flair to the game.

Controlling the falling blocks also proved easy and enjoyable utilising the Nintendo Wiimote in both its motion sensing and button bashing configurations. 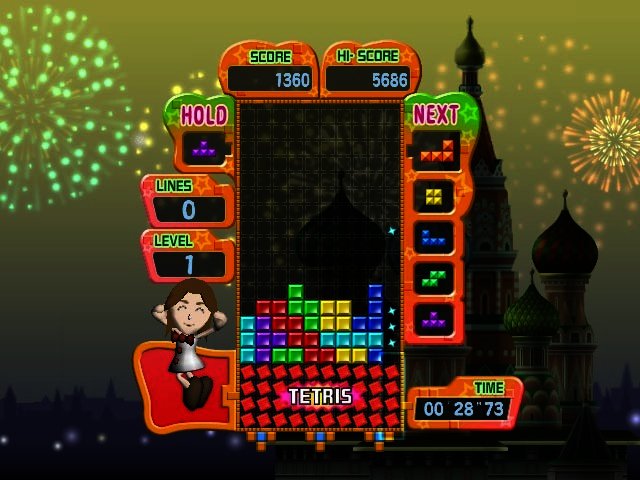 While the standard Tetris play option is still available the game also introduces new game modes, and these are what really adds something special to the tried-and-tested formula. All the new modes introduced in the original downloadable Tetris Party are available, these include the Field Climber mode in which players have to place Tetris blocks to allow a virtual climber to ascend to the top of the screen. The climber can only climb one block per turn so players have to think a little harder than usual ensuring he has a clear way to the top.

Shadow Tetris also makes a return from the original. In this turn-based mode players are tasked with completing a Tetris puzzle based on a background 'shadow' image. The silhouette of a penguin might appear for example and players then compete against each other to complete the puzzle perfectly.

In Bombliss mode volatile blocks of Tetriminoes (the official name for the iconic blocks), falls down to destroy neighbouring pieces when a row is cleared. Master Mode caters to those with years of block stacking experience and is basically a sped up version of the game where the blocks drop almost instantly, requiring super fast reflexes to keep ahead.

Another new mode that departs from the Tetris norm is Stage Racer. In this mode players are tasked with navigating a single tetrimino through a course to a goal line at the bottom of the screen. The time it takes to reach the goal is your score, making Stage Racer a welcome departure from the old school style of play. 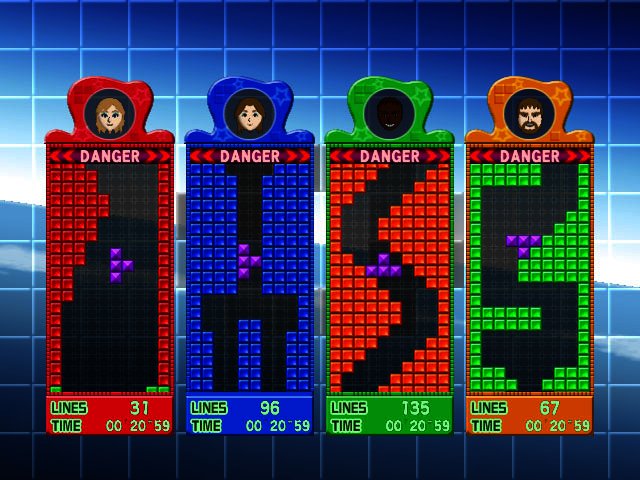 Multiplayer and Balance Board

The game also offers support for the Wii Balance Board where players can lean left or right to move their tetriminos around the screen and execute a quick squat to rotate blocks.

Except for the balance board mode, each gameplay mode can be played with up to three local human or AI opponents. The multiplayer aspect also brings some devious fun into the mix, allowing players to use power-up items to stop your opponent's blocks from rotating, force them to use a single block type for a small time period or even shoot rogue blocks into your neighbours carefully laid out Tetris stack.

Players can also play the game cooperatively, dropping blocks onto the same grid. A co-op vs. co-op mode is also available where teams of two can compete against each other for ultimate Tetris supremacy.

These modes add a great level of enjoyment to the game, transforming the traditionally solitary game experience into a fun multiplayer party. These co-op modes are only supported in local play though (2-4 people playing together), but an online mode is also available. The online battle mode is unfortunately limited to the basic game mode where players try to clear rows faster than their opponent. Power-ups and Wii speak support does add a little spice to the experience. 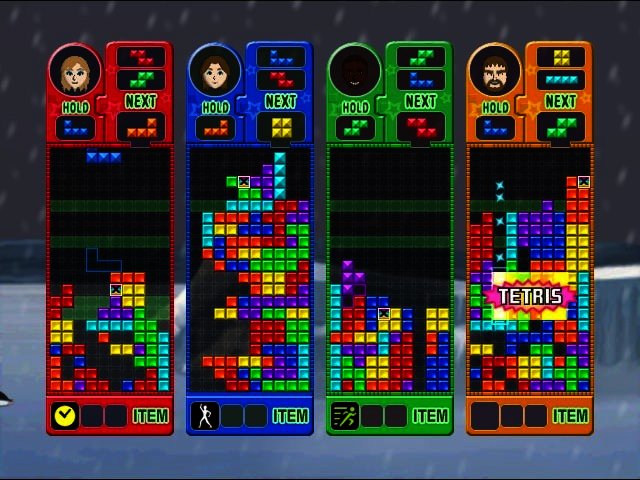 Tetris Party Deluxe successfully brings the classic game into the modern arena while simultaneously updating and increasing the fun factor. While the game is enjoyable for a while (especially with friends), we're not totally convinced that it's worth the full retail price. If you're looking for some good, clean family fun though, Tetris Party Deluxe on the Nintendo Wii is definitely a winner.

CONS
Repetitive tones and a lack of comprehensive multiplayer may not lend the game the longest lifespan.
TAGS:
TetrisNintendoWiibalance boardwiimote
USER COMMENTS