We love Spider-Man and we love games, but we can’t help feeling like there is a fly in the ointment with this one.

Superheroes. Spider-Man. Games. Mashing those three rich imaginative pieces of goodness together should spell sweet entertainment heaven, and yet this combination is not necessarily a guarantee of instant interactive success. The Amazing Spider-Man 2’s problem isn’t that it is a bad game, but rather feels like an uninspired one from the first scene.

Part of the problem is that the game’s story takes a step back, to Uncle Ben’s death and Spider-Man’s current pursuit of his killer two years down the line. That’s not necessarily a bad setup for the game’s story, but pursuing bland gangsters, only to meet dead ends is disappointing, and quite simply is not enticing enough on its own to hook one into wanting to play further.

Exacerbating matters is that the sidequests feel mundane, sort of like the superhero version of doing the dishes. Ignore these for too long though, and you will automatically be considered a menace by the populace, and even saving citizens and completing side quests isn’t a guarantee that you will retain your hero status in their eyes. 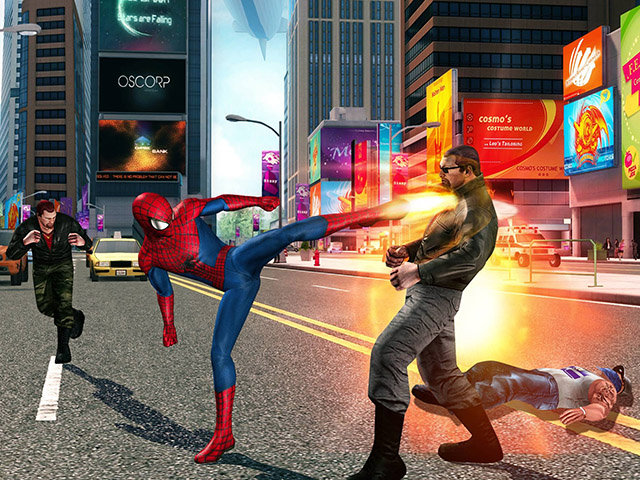 Roger would really come to regret asking Spider-Man's help in banishing his tonsilitis.

The other kind of web

Granted, developer Beenox has clearly paid attention to trying to replicate the feel of zipping through a city as Spider-Man would – web swinging from one building to another, gathering momentum and soaring through the air for aerial traversal – and for the most part, this works very well. Unfortunately though, sometimes the camera can too quickly get lost in the action, which stymies the fluidity of movement.

The Amazing Spider-Man 2 is clearly meant to be played a certain way; once you get into the rhythm of its demands, then it has its moments exhiliration. Indeed swinging from one building to the next (with webs attaching to actual buildings and left and right triggers controlling Spidey’s respective arms), crawling up- or running on walls provide some of the most fun. Spidey sense is also put to good use, both to anticipate opponent’s attacks and to locate current objectives. 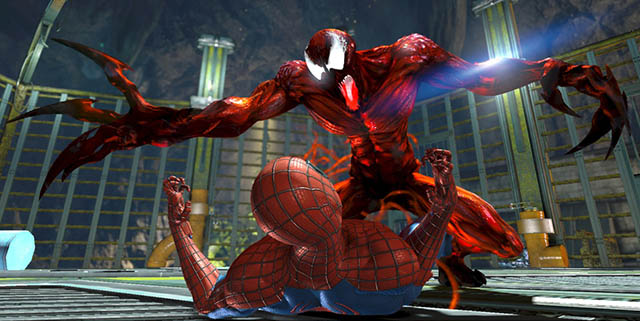 "Alright! Alright! You can keep my nailclippers then!"

To fly or fall

Alas, it is when you are grounded that the fun diminishes. While The Amazing Spider-Man 2 tries to emulate the combat scheme found in the Batman: Arkham Asylum/City games, it instead feels diluted to the point of being repetitive after a while. Not helping matters is that the thugs-for-hire type that you face off against are as dumb as wet cement, although it is amusing to hear them chortle “I think we have an intruder!” while you are demolishing their compatriots five metres in front of their nose. Thank you, Captain Obvious.

Thankfully, the game’s Peter Parker/Spidey (voiced by Sam Riegel) does come with the requisite brash humour and snark that made Andrew Garfield so likable in the movie, which at least livens up the fights, and the interactions with the thugs and bosses, considerably. Thankfully, you will face off against more distinctive opponents, including Electro, Green Goblin, Kingpin and Black Cat (no, not the peanut butter).

The game also has its gems, such as nifty allusions to the comics, and a tongue-in-cheek appearance by Stan Lee. In a nutshell, The Amazing Spider-Man 2 feels like two steps forward and one step back, and leaves one still waiting for that ultimate, defining Spider-Man game. RRP: R600.