Surpassing and superseding its already highly successful iPad (4) was no small feat, but in the iPad Air, Apple has done just that.

By now, you might be inclined to roll your eyes every time Apple announces a new iPad (or, as was the case with the iPad 4 and the iPad 3 before it, the confusingly named Next New iPad), but the iPad Air really does break new ground and offers the best iOS tablet experience yet.

Granted, the Retina screen has remained unchanged from the iPad 3 and iPad 4 (it still has the same luscious 2048 x 1536 resolution and 264 ppi), but not so the design and several other important factors. Starting with the obvious, the iPad Air is exceptionally thin at 7.5 mm and noticeably light at 478 g. This is a far cry from the previous iterations, which weighed in at around 600 g. This means that the device is light enough to comfortably hold in one hand, and even grip as one would a smaller 7” tablet.

A trim and a tuck

Along with the newly trimmed bezels, this further make a substantial difference in everyday use, as the 9.7” tablet is considerably more portable and compact than its predecessors. These factors mean that everything that the iPad is famous for catering to, from web browsing to ebook reading, playing games and availing oneself of an exhaustive library of apps, is made more comfortable and ultimately enjoyable.

The trimmed bezels and thus decreased width of the device has another benefit as well. It meant that we were able to type on the touch keyboard much faster than on previous, wider tablets, with both our thumbs comfortably reaching across the onscreen keyboard. For avid journalers and writers using apps such as Notability, Evernote or Awesome Note, this is a boon. We were also glad to see that the trimmed bezels still offered enough space to grip the device without our thumbs obscuring parts of the screen; one of the factors that we favoured in the iPad 2/3/4. 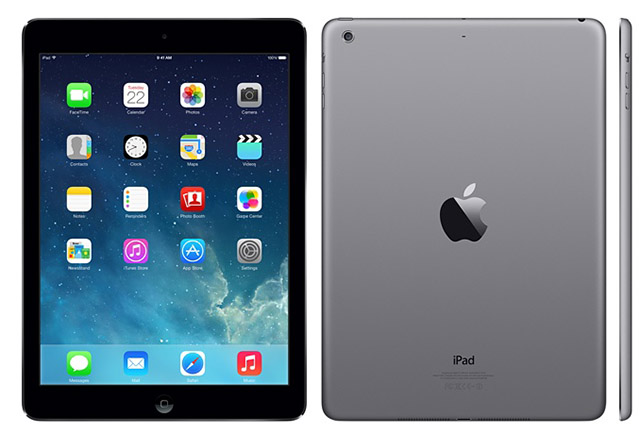 Granted, the iPad Air's claim to fame is its lightness and thinness, but what really won us over was its speed.

However, that is not the only reason why the iPad Air firmly outstripped its predecessors; instead that honour goes to the blazing speed of the device, thanks to the newly implemented A7 processor and dollop of extra memory. Apps open and close much faster; switching between different apps and waiting for them to load could be measured in single digit seconds (no more than 4). This while iOS 7 OS simply flies; apps swoop into view (although you can turn off animations if you prefer), checking and closing already running apps is near instantaneous and the new command centre smoothly slides into accessibility.

Furthermore, we found that sound seemed to be quite a bit louder on the iPad Air when compared with our older iPad 2. The one negative though is that if you tap the iPad Air’s screen hard enough, it does feel a bit less solid than the iPad 2’s screen for example. This can be a bit disconcerting at first, depending of course on how vigorously you are used to handling the tablet.

However, that is really the only negative we could find in the iPad Air. Its build quality is still otherwise unchanged – i.e. very good – and its battery life is once again just over the ten hour mark.

Apps optimised for the new OS are larger than on iOS 6, so you may want to invest in a larger capacity (which ranges from 16 GB and 32 GB to 64 GB and 128 GB) than you think you may need. One word of warning - while current stock starts at the R5 000 mark, the rand-dollar exchange will apparently change this in the foreseeable future.

PROS
Light, Extremely fast, More compact than previous iterations, A pleasure to hold and use