HP Officejet Pro 8500A Plus
0
comments

Printers and all-in-one (AIO) devices aren’t normally the ones getting the tech party started here in our offices. Enter Lexmark’s GENESIS S815 which looks set to change these devices’ usual dull tag.
Design
One of its greatest strengths is that it ditches the conventional look (much in the same way that the Motorola Flipout ditches the conventional phone form factors). Like an arty skyscraper most of its bulk accending upwards, with the S815’s design change found mainly in the vertical positioning of the scanner, defying the usual flat-bed position. Apart from being a head-turner (yes, we are talking about an AIO here), this shape also wins you back some desk real estate.
Compared to the Lexmark Pinnacle Pro901’s 250 x 465 x 392 mm frame, the S815 is somewhat smaller (in terms of width and length), measuring 420 x 386 x 321 mm. It’s also lighter (8.71 kg) than the Pro901 (9.27 kg), as well as the Canon PIXMA MG6140 (9.2 kg) we tested recently.
As far as styling is concerned the S815 is one of the best looking AIOs we’ve ever encountered. Granted it does not take a lot to beat the rest of the pack, but you can see that Lexmark pushed the boundaries, with the S815 flagship providing ample evidence of Lexmark’s resurgence.
An almost flat black panel adorns the front of the device providing a very modern iPad-like feel. Centred to the top is a large 4.3" WQVGA colour touch-screen employed on the Pinnacle, which makes it a simple and straightforward affair to utilise its functionality, including copying and scanning (although with some lag when using the touch-screen). The side of the device is covered by the more conventional metallic grey.
Scannerific AIO
Apart from design, certainly the most striking feature on the S815 is that it uses a 10 megapixel Mono CMOS Image Sensor to do the scanning. Lexmark calls it Flash Scan and it can perform a scan preview virtually instantaneously while A4 pages are completely scanned in at a blistering pace of around four seconds.You can save these in a number of formats including JPEG as well as a PDF file on your flash drive or PC. Flash Scan makes you actually want to scan something instead of dreading the usual cumbersome scanning process. 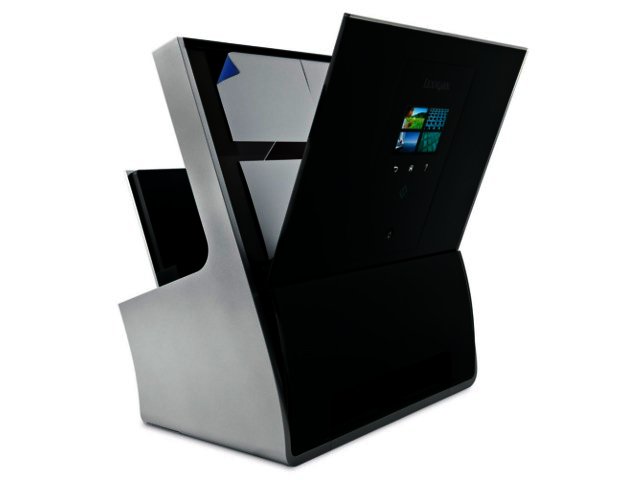 Downloadable apps
As seen on other Lexmark and HP printers, you can download a myriad of apps, such as a digital clock screensaver, basic calculator and Google calender app, which will ensure that you can just keep on adding to the AIO’s functionality as time goes by.
As with the Pro901 and Pro905, your printer must be connected to your PC as well as the Wi-Fi network to be able to download these apps. Following this you have to register on the company’s site and simply add your printer on the SmartSolutions section. Then you just add the apps you want to the SmartSolutions section of the site and sync it with your printer to store the app on there.
Your printer doesn’t need to be connected to the PC to utilise the downloaded apps, but the printer has to be connected to the Wi-Fi network for those apps requiring access to online content such as Google’s Calender app. Setting up the W-Fi (802.11n) connection as is the case on all Lexmark AIOs is a trouble-free affair.
Performance
Printing is done at a very good quality (especially on photo paper), with this printer offering a  print resolutions of up to 2400 x 1200 dpi for black and white and up to 4800 x 1200 dpi for colour images. Jobs are also done at a fast pace, although not really near the claimed 33 ppm (pages per minute) black and white and 30 ppm colour marks. The fastest speed is best achieved in draft mode, but the printing quality will take a hit for the bump in pace.
Duplex printing is also offered and works well on the S815, as is printing on a variety of paper formats and sizes.
Where the AIO is lacking though, is in its input tray (at the back of the unit) that can only accommodate 100 A4 pages, making the GENESIS not really the office printing workhorse. Lexmark's Pro905’s tray can hold 150 pages and the Pro901 (with its second tray) can be loaded with 300. There’s a handy output tray at the front of the device that can be neatly folded away when the printer is not in use and which holds 50 pages.
Final Word
The Lexmark GENESIS S815 will not only make the heads turn with its unconventional, fashionable looks, but is also a beast when it comes to scanning thanks to Lexmark’s Flash Scan system. The S815 delivers good quality printouts at a fast pace, only being hampered by its input tray size limit. It retails for quite a sturdy R3499.
Pro
Good looks (for a printer we mean), fast scanning, downloadable apps.
Con
Not the cheapest AIO money can buy, noticeable lag when operating the touch display.

PROS
Good looks (for a printer we mean), fast scanning