This review is written by movie fundi Spling. For more awesome movie news and reviews, visit his website at www.spling.co.za.

Elysium is the much-anticipated next movie from District 9’s South African-born Neill Blomkamp, who has crafted another epic and spectacular science-fiction actioner that prods us by holding a mirror up against present day society.

Armed with a bigger budget and more sway, Blomkamp has placed the story in 2154, the same year as Avatar. While he initially considered Die Antwoord's Ninja and even Eminem for the role of Max, Matt Damon was cast with Jodie Foster and Sharlto Copley in supporting roles. The effects are just as visceral as District 9, but they've zoomed out of the cityscape to give credence to a world in ruins overshadowed by Elysium, an idyllic floating space station for the elite.

And equality for all…

After a workplace accident leaves Max in desperate need of medical attention, he takes it upon himself to fulfil a lifelong dream of reaching Elysium in the hope of seeking proper treatment. What starts as a do-or-die mission for one life inadvertently becomes a quest for equality of all life.

On the surface, Elysium is an original science-fiction film, comparable with District 9 for arc, style, special effects, theme, genre and actors. Its story follows a similar trajectory to Gladiator as Max, a slave seeking retribution, is forced to wear an exoskeleton suit in order to battle his way to Elysium in the hopes of finding justice for him and his ‘family’. 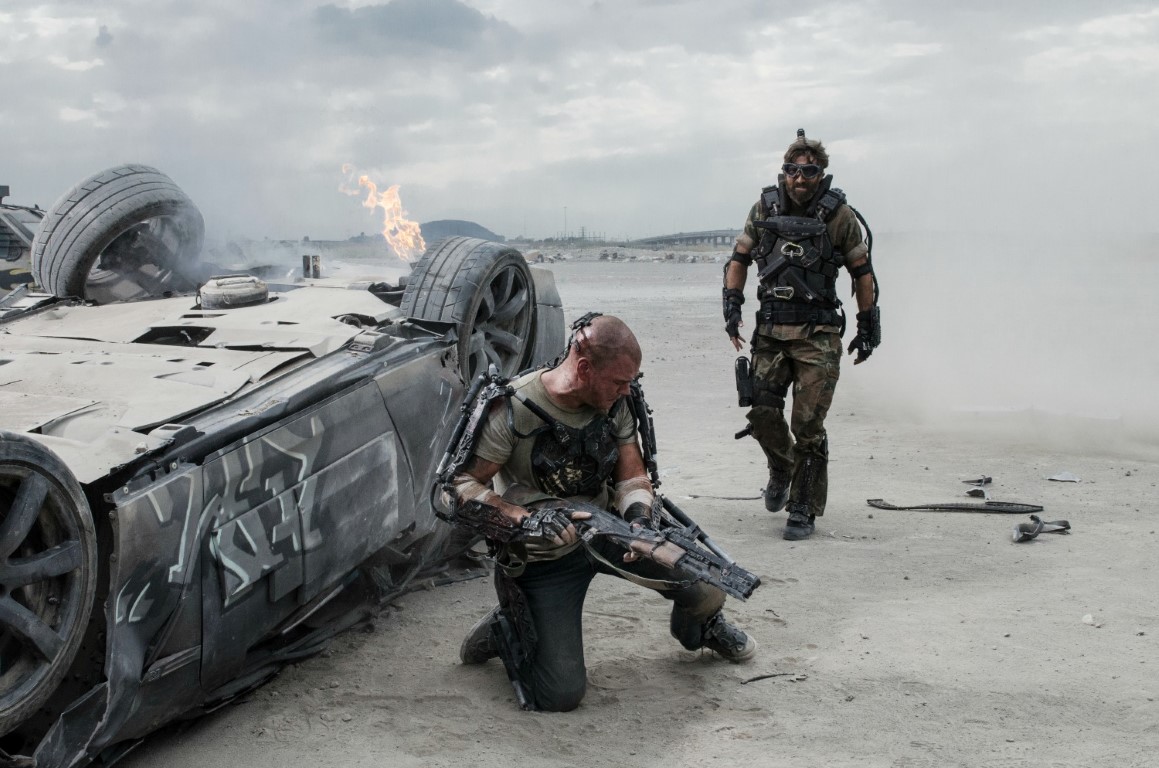 Both District 9 and Elysium have been said to carry political messages and this is difficult to avoid when portraying a disparity between races. There's a government-enforced segregation between the wealthy and the poor, which seems to be largely divided along racial lines. Delacourt (Foster), a high ranking Elysium official and megalomaniac, has an Aryan look and could have derived her name from influential economist and businessman, Pieter de la Court.

Being South African, one can understand Blomkamp's frame of reference. This world-within-a-nation country has many parallels with America, and the idea of an enforced system of oppression in Apartheid was a reality for him growing up. Whether he's representing history or the present in his vision of the future, is what makes this actioner that much more thought-provoking and relevant.

South African-isms have found their way into Elysium in all shapes and forms, many of which will only truly be appreciated from a South African perspective. Kruger (Copley) and his mercenary wing men, played by Brandon Auret and Josh Blacker, are inspired by 32-Battalion soldiers. As South Africans, a lot of Afrikaans slang and culture permeates the film without any subtitles.

Matt Damon is a strong actor, who brings a sense of everyman authenticity to his characters that lingers just long enough not to set or typecast the actor. The character of Max lacks definition, and apart from a little stick-it-to-the-man attitude there's little to distinguish him and very few points of emotional contact for audiences. As such, Damon's performance comes across as more Sam Worthington than Russell Crowe, when Vin Diesel may have been a better match. This distancing from the hero keeps Elysium just out-of-reach.

Jodie Foster is the right kind of actress for the role of Delacourt, who was originally intended to be a male. She's strong-willed, gives the character clout and even comes across as an eccentric personality. As quirky as she is, you can't help but think that Tilda Swinton would have brought more gravity to the role.

It is Sharlto Copley that steals most of the scenes with his outlandish take on Kruger, whose South African heritage and psychotic tendencies seem to have been loosely modelled on Ninja from Die Antwoord. He brings a complex and unpredictable energy to his character, much like Gary Oldman, that makes him a fascinating equal/opposite to Max. Alice Braga, Diego Luna, Wagner Moura and everybody's favourite bad guy, William Fichtner, round off a fine cast with solid performances as key characters.

Elysium's production values ground the film in a gritty not-too-distant future, where robots have been commissioned to police the earthlings and take care of basic day-to-day governmental functions to keep the work force in check. The technology has weight, with tarnish and surface scratches adding to the realism of the hard knock life in the industrial slums. Blomkamp's love for future tech carries forth into the wide selection of explosives and weaponry used in skirmishes.

The movie bombards you with beautiful utopian/dystopian visuals, design and effects. The conflicts are largely derived from social, economic and political inequalities, which fuel the story. While this makes it epic, spectacular and enthralling even, it lacks the connective tissue in terms of likable performances to deliver the emotional punch when it needs it most.

When your debut feature film is District 9, it's always going to be difficult meeting expectations. What Neill Blomkamp has achieved with Elysium, demonstrates that he has the ability to create a thinking man's blockbuster - the sort of film that carries the detail of production and thought that warrant repeat viewings, despite its flaws. While it won't be remembered as a truly great film, it still makes for solid entertainment.