In recent financial quarters, the growth in smartphone sales has stagnated slightly, and in some cases even shrank, prompting some to wonder if the market had reached a point of saturation. While there is still merit to that argument, Gartner's new Q1 2018 smartphone sales report suggests that the downward trend is heading in a positive direction.

According to Gartner's findings, Q1 2018 saw a small growth of 1.8% in sales compared to the same quarter last year. An estimated total of 455 million devices were sold during the first quarter, with smartphones accounting for roughly 384 million of that figure (84%). 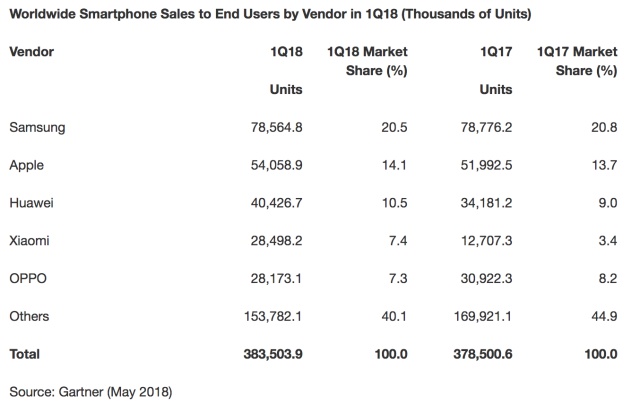 This percentage had little to do with the premium smartphone space, says Gartner, with the research firm citing the fact that many devices featured incremental changes compared to their predecessors. Instead Gartner's research director, Anshul Gupta, noted that, "demand for entry-level smartphones (sub-$100) and low midtier smartphones (sub-$150) improved due to better-quality models." As such, it appears that devices in the mid-range and entry-level market hold better value than their more expensive brethren.

From a vendor perspective, it was Chinese manufacturers Huawei and Xiaomi that were viewed as the big winners in Q1 2018, with each adopting different strategies for their respective improved performances.

"Achieving 18.3% growth in the first quarter of 2018 helped Huawei close the gap with Apple," says Gupta. "However, its future growth increasingly depends on the vendor ramping up share in Emerging Asia/Pacific and resolving issues in the U.S. market, through the development of a stronger consumer brand," he added.

In the case of Xiaomi, refreshing much of their smartphone lineup and aggressive pricing yielded dividends, according to Gupta. "This strategy led Xiaomi to achieve 330 percent growth in the Emerging Asia/Pacific region," he notes.

Whether the Q1 growth can be matched for 2018's upcoming quarters remains to be seen, but with few new devices being announced of late, we may have to wait until Q4 to see a true reflection of how the market has reacted.

What we learned about the Nintendo Switch this week
Fitbit Versa
Fibre has laid the foundation for a smarter SA, now it’s up to the users
ScienceLogic expands reach to South Africa amid demand for AIOps
Don’t let data be a stumbling block in your SAP S/4HANA upgrade
Read