Aorus X3 Plus boasts extreme specs in a portable package

The other Aorus notebook which managed to steal our attention – and we were sorely tempted to allow it to steal our wallet as well if possible – was the X7’s smaller brother, the X3 Plus. This 13.9” (13.3” is another option) is a bit of an anachronism.

Small notebooks that resemble ultrabooks in dimension aren’t ‘meant’ to boast extreme performance, never mind be billed as catering to the most demanding high-end gaming and 3D applications; while still being portable enough to comfortable to carry around for long stretches; not to mention boasting a 4k screen to boot.

That though is exactly what the Aorus X3 Plus brings to bear. Rather than just resembling an Aorus X7 (hands-on) subjected to a few too many spin cycles in the washing machine, it’s a beauty in its own right, with its own differentiation and character. The notebook, likes its larger counterpart, is solid throughout and clearly very well built. It similarly boasts high-end internal specs, such as an NVIDIA GeForce GTX 870M graphics card and the 4th gen Intel Core i7 processor, is impressively thin and is only a little heavier at 1.8 kg, than a similarly sized ultrabook. This is noteworthy when you consider that you cannot begin to compare the two in terms of performance and what this Aorus and an ultrabook could comparatively handle. 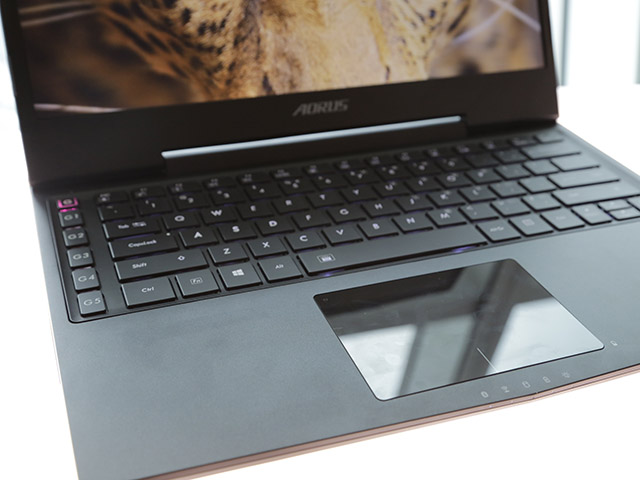 It may seem like a curious choice, but the X3's touchpad is glossier than its screen. In our hands-on time with the notebook, it did remind quite a bit of running our hands over a touchscreen, and certainly seemed very responsive.

Additionally, like on the X7, the quality of the matte display shows just how far that technology has come, firmly banishing thoughts of the dullness that characterised matte displays a few years ago. While both machines sport Windows 8, neither are touch screens – mostly due to the philosophy that gamers don’t exactly cotton onto the idea of marring their experience with fingerprint smudges.

Also, a curious part of the notebook is its glass trackpad. This, apparently, caters to the familiarity that today’s users have with navigating on a touchscreen. However, we found we could quite easily get used to it. If it sounds like we may be a little besotted with the two Aorus notebooks on show, you would be right on target.

The tough challenge would be which of the two to choose, since each in their own way, reminded us what we loved about notebooks in the first place. Most particularly, both the X7 and X3 ooze premium quality and would make us look forward to turning on one of these particular notebooks at the end of the long day for a good round of gaming or digital imaging.

Apparently, how many units, how soon and whether the X3 comes into the country at all, is going to depend on local demand. If you appreciate great products in general and superlative notebooks in particular, we’re inclined to believe that you, like us, are going to want at least one of these beauties.